“Warcraft” is a major motion picture based on an online RPG that has come under criticism over the years.  Not because of any controversial content, or even a moralistic characters, but because the game is so addicting, so much fun, that some people start playing it and the video game world becomes their real world.  They can’t pull themselves away from their computers, and they lose most (if not all) contact with their family and friends.  I knew someone was like this.  While I won’t reveal his name here, he was so addicted to this game, played it for so many years, that when he finally got bored with it and rejoined the world, he discovered that Bill Clinton was no longer the President of the United States.  With that kind of following, I’m sort of surprised it took a studio this long to make a movie out of the series in the first place (maybe they thought people wouldn’t leave their couch to see it?). 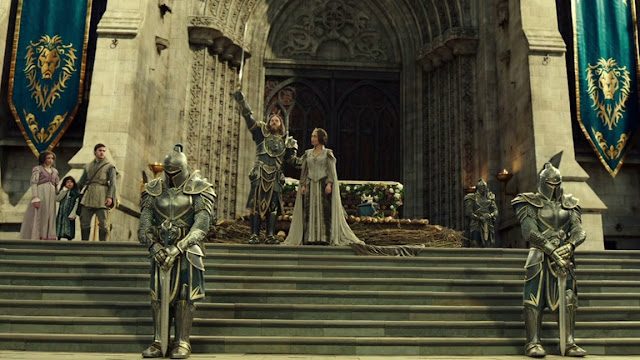 What is going to disappoint fans of the franchise is that is contains none of the imagination or creativity that made the games such an addicting waste of time in the first place.  While the story of “Warcraft” does indeed revolve around wizards, spells, alternate worlds, and orcs fighting humans, there isn’t a sufficiently compelling conflict to pull the viewers into the world.  The film was produced by the company that made the video games, and they have made the same common mistake most video game movies make: Not realizing that audiences in a movie can’t play what they are watching.  They are outside observers, looking into the screen and absorbing what’s happening.  In a video game two types of species fighting one another is enough of a reason to play, for you can control the actions of the characters on the screen and determine their fates. 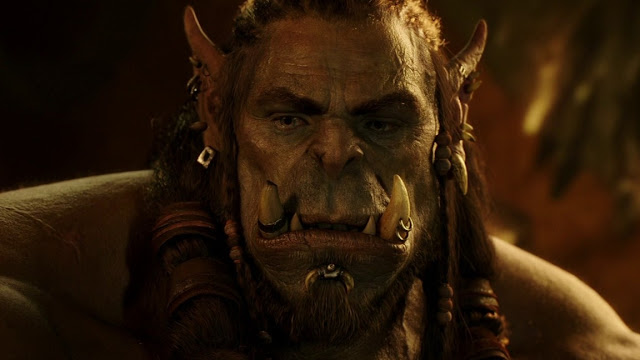 Here we are watching two soldiers quietly ponder if there is a way for peace to be obtained, all while doing little (if anything) to ensure that peace is obtained.  On one side you have the humans, who (for all intents and purposes) are led by Sir Anduin Lothar (Travis Fimmel).  On the other side you have the orcs, who are led by an antagonist who wants to destroy everything, but who might be led by Durotan (Toby Cooper), who sees the damage the orc’s magic is doing, and wants to prevent another planet from being destroyed.  In the middle you have Garona Halforcen (Paula Patton), who appears to be a cross between and orc and a human, who may have that middle ground point of view that can save everyone’s lives.  Not that any of this matters of course.  I happened to see this movie at a screening with my dad (who, it should be noted, does not play video games).

When he asked me what I thought of it, all I could say was “all that fighting…and nothing got accomplished.”  I hesitate to share that opinion with you readers, at the risk of spoiling the (so-called) end, but there really isn’t anything to spoil.  Like most other movies that hope to kick start a franchise, “Warcraft” is pretty much two hours of non-stop fighting with the occasional five minute break to explain what is going on.  When the characters do talk you don’t get a sense of who they are or what they want.  They must simply explain what is going on so that the audience has a semblance of a plot, all before moving on to the next scene where lots of CGI action awaits.  It speaks volumes that in this movie, the humans have a king (played by Dominic Cooper), yet a first rank soldier seems to be calling all of the shots.  It’s all set up to a world that may be interesting two or three films down the line, but at the moment needs to establish just enough to make the special effects finale justifiable.

At times “Warcraft” feels like a video game you can’t control.  Considering what kind of movie “Warcraft” is supposed to be, this wouldn’t be too surprising, except for the fact that the movie was directed by Duncan Jones, who has directed much better films before.  His most memorable movie to date is likely “Source Code,” an action thriller that was made on a small budget but had a fascinating script and concept.  Given a bigger budget, I was hoping he would be able to make the most of it, but apparently it was not to be.  I’m not sure if this was his fault or the studio executives calling the shots, but this is a movie that feels like a television pilot.  If I could watch the next episode next week, maybe the loose nature of the screenplay wouldn’t bother me, but there isn’t much here to anticipate me waiting two years to see another installment of this, and I doubt it will inspire people to give up their real lives to immerse themselves in this world like the game did.