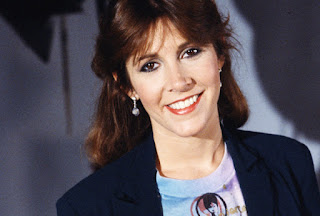 
Carrie Fisher has died today.  She was 60 years old.  The daughter Eddie Fisher and Debbie Reynolds, Fisher had a long and successful Hollywood career, though she will most likely always be remembered for her role as Princess Leia in the original ‘Star Wars’ trilogy (she was promoted to General in the new one).  Before she graced the screens with her cinnamon bun style haircut though, she was in “Shampoo,” the Hal Ashby directed classic that made Warren Beatty a star.  He was not the only actor who got noticed, as the film also helped launch the career of Fisher herself.  Right afterword’s she starred in that little film known as “Star Wars” (at the time), and became the first crush of many young boys as well as the first real role model for young girls who were forced to watched science fiction films because their dads liked to.
She appeared in five of those movies herself (with one of those yet to be released), and her character appeared in many other spin-offs, video games, and comic books.  You might think that Fisher was a one hit wonder, who didn’t do much beyond her ‘Star Wars’ work.  This, many people are shocked to discover, is not the truth.  In fact, for someone who flew under the radar so much, her accomplishments in Hollywood were considerable.  She worked with Woody Allen on his classic film “Hannah and Her Sisters,” which is considered to be one of the auteurs best work.  She had a small part in the romantic comedy “When Harry Met Sally,” which is considered a staple of the genre.  She is one of the few actors to have made movies with both John AND Jim Belushi (“The Blues Brothers” and “The Man with One Red Shoe”)!  She published a novel called “Postcards from the Edge,” which became a best seller that was turned into a movie starring Meryl Streep and Shirley MacLaine (with Fisher writing the screenplay herself).
In 2005 she ended up rejoining nerd culture by giving voice to Angela, the bemused boss of Peter Griffin on “Family Guy.”  Life wasn’t always easy for the actress though.  She struggled with drugs early in her career and her love life was turbulous at best.  At one point she did take on roles that were likely beneath her, with her most infamous being her involvement in the movie “Drop Dead Fred,” which has become a popular film to make fun of on YouTube.  Since she was a cultural icon though, she could always depend on lucrative cameo appearances to find work, and took advantage of that fact to have walk on roles in movies like “Scream 3,” “Jay and Silent Bob Strike Back,” “Charlie’s Angels: Full Throttle,” and “Hook.” She would take on supporting roles in movies like “Cougar Club” and “The Women” later on in life, but fittingly, she never really appeared in the limelight in full again until she returned to her famous role in “Star Wars Episode VII: The Force Awakens.”
It is fitting, I think, that her career should begin and end with same character.  Some might consider what happened to her to be a disappointment.  Some will say she wasn’t very successful for largely being associated with one part.  The thing people seem to forget though is that the movie can make people immortal.  The right part can do that.  Carrie Fisher may not have been a star of many movies, but more people will remember her than some legendary actors who played several big roles of the time.  Princess Leia will be inspiring young girls for years.  Princess Leia will be teaching boys about love for years.  Princess Leia is as recognizable as Indiana Jones, Humphrey Bogart in “Casablanca,” and Batman.  That is one heck of a legacy to leave behind, so whether her career was all people thought it should be, it has left a lasting impression and will continue to do so for years to come.  And may the force be with her.  Always.
Tweet