The biggest accomplish one could say about “Fifty Shades of Grey” is that I could honestly say that the appeal of seeing any sex in the film was literally dead before the first piece of clothing was even taken off. The best sex in movies involve passionate characters, sensual flirtation, and a deep chemistry between the two lead characters that make you want to see them express their love for each other on screen. Early on though our leading man Christian Grey (Jamie Dornan) discusses with naïve virgin Anastasia (Dakota Johnson) “I won't touch you until all the necessary paperwork has been signed.” You know you're in trouble when your lead character is essentially asking for a prenup just to get to first base with you. 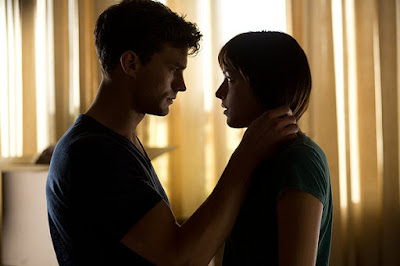 He has his reasons though for saying this though. Reasons, I hate to say, that make a lot of sense in this social media infested world. See, he is a billionaire at the ripe age of 27. Like most billionaires he has very (as he likes to say) “specific” desires. Therefor any foreplay has to have non-disclosure agreements signed because Christian might not be respected much longer in the business world if they were to discover he likes to…I'm sorry, this is a family friendly website; you'll have to go to the New York Times for those juicy details. Ana, for her part, does not seem to take too kindly to Mr. Grey's demands for a relationship where he is a dominant sadomasochist and she is a submissive little butterfly, but she does toy with the ideas because she is intrigued by the young billionaire. 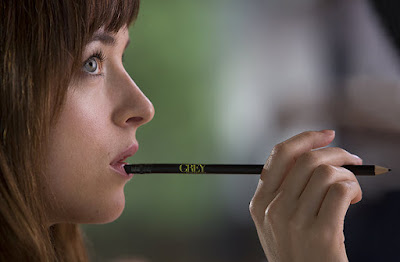 I'm not entirely sure why. Sure he looks like the model boyfriend, but he doesn't strike me as a very articulate man. Early on she asks him why he isn't in a relationship. He replies “because people get to know me.” She then says “maybe they don't know you enough.” I mean, geez, what is this, bad “Twilight” fan fiction that managed to get published? Never mind. If we're all being honest it should be acknowledged that the only reason people are interested in this movie is because the novel had very graphic sex scenes that basically made it the best-selling porno of all time. No one seems to argue that the rest of the novel was objectively terrible. The question is how far would the movie go in portraying its graphic sex scenes? 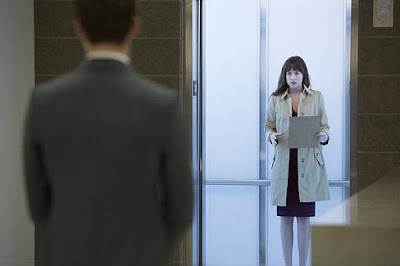 Well, it's not quite as graphic as you might expect. While the studios promised to go all out, someone ultimately decided that keeping the film in R territory would be better than letting it have the more restrictive NC-17 (I suppose this is good news for parents who want to bring their kids with them). I'm also okay with movies that contain graphic sex if that sex serves a purpose (you can check out my reviews for “Last Tango in Paris” and “Shame” if you want…both films, I want to mention, did get the MPAA to slap them with the NC-17 rating). And really, it's not that the sex in “Fifty Shades of Grey” is graphic that bothers me so much as what it represents. What the sex here represents is a woman who basically gives in to a sick man's desire. A man who must know he is sick, or else why would he want a contract for it so much? 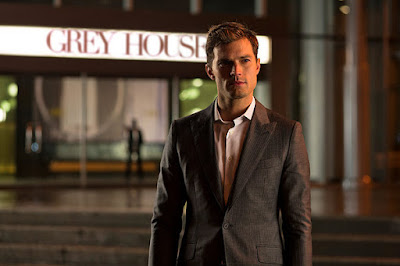 The movie does give us glimpses as to why he wants this so much, but the ideas aren't explored. Maybe that's what the sequels are for? Anyway, it's interesting to watch a movie that is being sold on its sex scenes, and ultimately those scenes just make you feel dirty as you watch them. Dumb as a brick Ana may be, but she is a nice girl. It's not fun to watch this woman basically be abused and raped for this man's sick perversions, which makes these sex scenes so terrible to watch regardless how graphic they may or may not be. The climax of the film (ho ho) involves an act so evil, makes the characters recoil so much, that it was hard to figure out what the point of the movie was in the long run. Basically, Christian has some serious choices to make later on down the road. 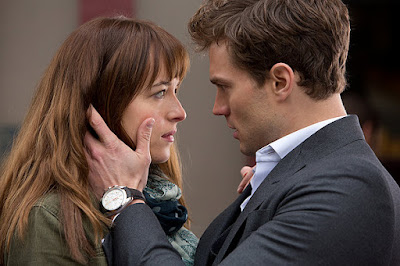 Before I end this review I do want to take a moment to ask what the point of feminism is these days. I don't want to get too political here, but how effective can you honestly say this movement is when this, “Twilight,” and Miley Cyrus keep becoming cultural phenomenon's? Doesn't the movement exist to stop atrocities like these from becoming popular (or at the very least embraced)? If the movement was working at all, my review of “Fifty Shades of Grey” would have been completely unnecessary because it wouldn't be popular enough for this movie to exist in the first place. Oh, and on a final note, I'm not sure what executive decided this would be a good movie to format on IMAX over “Kingsman: The Secret Service,” but I think they should have their yearly performance evaluation moved up just a little bit early this year, for these are not images that improve the bigger they get (I know that sounds like an innuendo, but it's not).