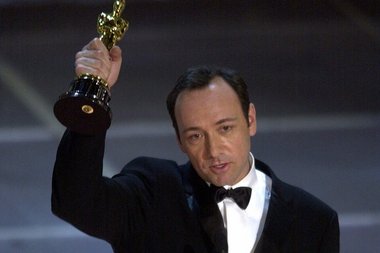 "The art doesn't excuse the crime...however, the crime also doesn't diminish the art."

That is a quote film critic A.O. Scott gave when he was recommending "Ghost Writer" on "At the Movies."  He said this in reference to the fact that Roman Polanski was directing the movie, and this is a man that many people get really passionate about when you bring him up.  For those unaware, the man drugged and raped a 13-year-old girl at Jack Nicholson's house (who was a friend at the time), admitted to doing it, and then fled the country when it became clear he wasn't going to get a reduced jail sentence.  For years the debate ranged on whether or not people would be able to separate the art from the artist.  For many, the answer is no.  They feel dirty for giving money to a movie that was created by a convicted child molester.  On the other end you have many who whose answer would be yes, who CAN separate the art from the artist!

In his case this was probably not too difficult since Polanski IS a director and is rarely on screen!  For another Academy Award-winning director - Woody Allen - that was likely more difficult because Allen is front and center in many of his movies, and writes in a way that reminds other's of his life experiences.  Their controversies popped up during a time when people were, for lack of a better word, less sensitive than they are now.  These days, a celebrity who messes up is one to avoid.  Especially since we live in a world where 'rape culture' is considered a real threat by many, sexual assault allegations are killing careers.  Bill Cosby is no longer beloved because he went through a couple trials for drugging and raping women (which ended in a mistrial), and many families no longer watch reruns of "The Cosby Show."  Harvey Weinstein is the producer whose past behavior created the current volatile environment we are currently living in, and many people can't bear to watch "Shakespear in Love" (or any other Weinstein produced movies) anymore.

Stephen Collins lost his career when tapes came out and Roy Price got fired from Amazon Studios for inappropriate conduct.  I'm not defending people losing their jobs; any job is a privilege, and when you create a hostile working environment you are subject to termination.  The question becomes can people still separate the art from the artist?  Were we ever truly doing that to begin with?  Does supporting the art mean you are, in some weird way, okay with the behavior?  When I put "Hacksaw Ridge" on my list of the best films of last year I got some very angry e-mails from people who asked how I could do that?  My answer was simple: it was one of the best films of the year.  Was that an issue?  Apparently it was because the director was Mel Gibson, whose anti-Semitic remarks made him a pariah for years in Hollywood.  My reasoning was that he made a great movie.  His personal opinions be damned, I was looking for an emotional war movie, and he delivered.

All of this brings us to Kevin Spacey.

Spacey is one of the finest actors living today.  I can say that with a straight face because it is true.  It is true and you would have to be a damn fool to suggest otherwise.  The man won two Academy Awards (one for lead and one for supporting).  He directed "Beyond the Sea."  He's actually a pretty good singer.  If you have kids, he will scare them as Hopper from "A Bug's Life."  When Netflix needed a leading man for their first original programing, they went after him aggressively, and his performance of Frank Underwood is considered a key reason why "House of Cards" was a hit (and put Netflix on the map as a contender in the world of television).  Make a list of movies that is in your top ten best films of all time, and chances are Spacey will be in one of them.  He provided such iconic performances in "The Usual Suspects," "American Beauty," "L.A. Confidential," "Pay it Forward," "Margin Call," "Baby Driver," and so many more (including one thriller I'm leaving out to avoid spoilers).

Can you really say you aren't going to watch those movies again?  Can you honestly bear to say those performances aren't absolutely brilliant now?  I can't do that.  I can't even bring myself to.  That said, there is a bit of understanding where people are coming from.  There are so many reports or men abusing power that the world is out for blood.  On a more personal level it might be difficult to see Spacey play a nice guy when you feel he is a creep in real life.  Ironically, it may also be harder to watch him play a creep if you feel he is one in real life.  Polanski and Gibson can hide behind the camera and not have audiences realize who's telling the story until the end of the movie.  Actor's don't always have that luxury.  They are front and center, and seeing their picture on a blog like this with words like these being written out below is not something most of them can get around.  So, what is the solution and what's the appropriate response?

I've been told by some people that they can no longer support actors or directors who take advantage or women and children because they consider it condoning their behavior.  They don't understand how the art and the artist can be seen in different light when the artist puts so much of himself/herself into what they are doing.  Certainly I'm taking my own personal experiences into consideration as I write this random blog post, so surely Spacey is putting something of him into a performance...right?  Well, no, not really.  I think one can make a case that Woody Allen is pretty much playing himself every movie he makes.  That makes his personal failings harder to overlook.  Spacey shows so much versatility in all of his movies, can go from playing a wimp in one movie and a crime lord in another, that he gives real meaning to the term "professional faker."  He's such a professional, that he even knew exactly what to say to get these stories printed with a different headline (another sensitive topic that we simply don't have time to deal with here).

He is also a man who is fiercely protective of his private life.  So much so that people who have interviewed him walk away feeling like they didn't really speak to him.  They were talking to a professional.  That is always how he has presented himself to the world and he continues to do so.  I have no idea if the allegations are or aren't within his character because he is always portraying someone other than himself in public.  I never watch his movies to see him; I watch them to see him playing someone else.  I pay for movies because actors are supposed to make me forget about the world around them.  They pretend.  That's what they do.  Could I watch a Kevin Spacey movie and still be taken to another world even with the allegations?  Probably.  He's so good at what he does that I think many people will easily forget about his personal short comings when the new season of "House of Cards" rolls around.

Besides, as terrible as all this is now, people do eventually forget.  They do move on.  People are watching "Braveheart" again without thinking about the drunk tirades of the star (and director) on screen.  Elia Kazen used to be poison.  Now...nobody cares, and people are will enjoying "East of Eden" and "On the Waterfront" with almost no idea of the controversies surrounding the man when he was alive.  Marilyn Monroe's sketchy personal life does not make "Some Like it Hot" any less funny.  I know for some this is a difficult topic.  A dark evil has been exposed in Hollywood and we the people want blood.  We want things to change.  We think shunning is the only way to make change happen.  While there should be consequences, I personally believe that calling for heads just results in a slaughter that would make an average "Game of Thrones" episode look tame in comparison.  I do believe in being firm, but compassionate.

If I stopped eating out because of fear that I was contributing to the paycheck of a waiter who may not live a completely moral life, I simply would never eat.  If you want to watch movies you may have to accept that everyone who is in the movie may not be upstanding citizens, or else you may find yourself without anything to watch.  Besides, if this is the mountain you want to die on, you must ask yourself how you can watch movies about ideals and morals, because these are the very things the people who make the movies betray on a daily basis in an effort to be successful.  Hollywood is a lie.  It's like Disneyland, really: it's all magical on the outside, but go behind closed doors and everything is very ordinary and unclean.  I will continue to watch the movies by Kevin Spacey.  He is an artist who makes good art.  As a person...well, if I ever meet him, I guess I'll have to deal with that when I get there.