Over twelve years ago, Morgan Spurlock burst onto the movie scene with an unexpected blockbuster.  That blockbuster wouldn't be an innovative action film like "The Matrix," where state-of-the-art visuals effects were pioneered and a future meme in the form of Keanu Reeves saying "whoa" were born.  No, it would be a documentary called "Super Size Me," in which the star and director himself would keep track of his own rapidly failing health while eating nothing but McDonald's for thirty days straight.  The unexpected popularity of the film didn't create a new bullet time special effect, but it did result in the signature Super Size option being discontinued at every McDonald's.  Since then, the chain (and fast food industry as a whole) has been rebranding themselves to be more "healthy." 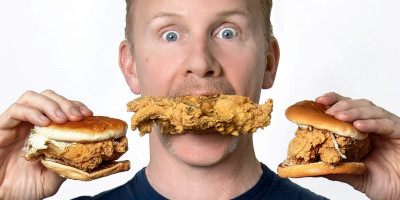 There are more greens on the burgers, low carb options, and (most importantly) the chicken sandwich has overtaken the burger as the number one eaten item on the menu (which has resulted in Chick-fil-A and Popeye's taking over the fast food market).  On the surface it would seem that fast food, at the very least, isn't getting worse for you.  However, if fast food has gotten healthier, why is obesity still on the rise even a decade after the film was released?  Is chicken really healthier for you than a burger?  The answer to that second question is undoubably 'yes,' however as "Super Size Me 2: Holy Chicken" highlights, it might not be the chicken but the business itself that's the problem. 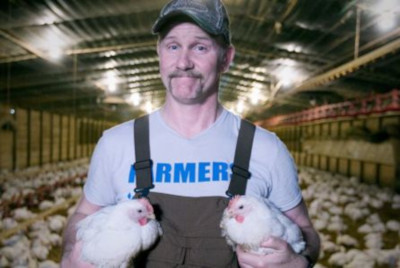 In the previous film Spurlock merely consumed the food while talking to health experts about the effects it was having on his body.  This time he feels that he should make the food if he is to understand what is going on with the industry. The results (as you can probably imagine) are terrifying in a different sort of way than in the last film.  The main focus this time around is how effective food marketing can be where it convinces people of hypothetical heath benefits to eating food that, in reality, isn't good for you at all.  He points out that while chicken itself is better for you than red meat (obviously), most people prefer it breaded and fried, which kills most of the things that are healthy about it.  What's more, the grilled chicken may not actually be grilled anyway, as many fast food companies have the ability to paint grill marks on the chicken with food coloring. 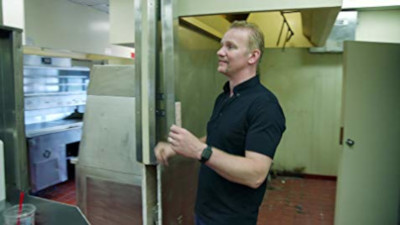 The fact that that last bit of information is the least offensive discovery in this film should speak volumes about what's to come.  He steps into a McDonald's for first the first time in twelve years and marvel's at how much cleaner, nicer, and friendlier it all looks.  The greens on the walls and the new packaging looks like that of a company that has truly come a long way since the last film.  Once he takes a bites of a chicken sandwich though...well, as he so perfectly put it, "it's nice to know some things never change."  Going beyond the food we follow his communications with the FDA on how he can market his chickens as 'free range' and 'cage free,' only to discover the circumstances that are required for such terms are so weak, the terms themselves have no real meaning beyond making people feel better about the quality of their food. The saddest scenes occur midway when Spurlock talks to farmers about their dealings with Tyson, and how the company uses a tournament system that will pay the farmers more money for bigger and healthier birds.  It sounds logical in concept, except for the fact that Tyson provides the birds, the feed, and most of the things the farmers need for the so-called tournament, and farmers who get on their bad side getting worse supplies and (subsequently) lower pay.  This system is brought into more question as the farmer who helps Spurlock raise his chickens winds up last in the tournament despite providing the bigger birds, leading everyone to wonder if Tyson is punishing him for talking to the trouble making film maker about how farming life actually works.  There's a lot to unpack in this one section, that I suspect a "Super Size Me 3" would likely be in order to see if this situation changes in ten years. 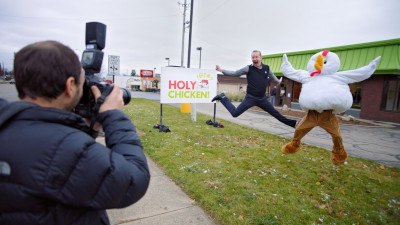 As I watched "Super Size Me 2: Holy Chicken" I did note that it wasn't as focused as the first film.  Spurlock is tackling a lot more this time around, and at times that could be a detriment.  However, he is almost always entertaining and knows how to package information that is out there for anyone to discover in one condensed, two hour package movie combo meal.  It's so effective at making the conversation about these important issues fun and engaging, that it's a shame the film was shelved for two years by YouTube Red (who has since dropped out of releasing the film altogether).  While I understand there were uneasy feelings about certain situations regarding the director at the time (feelings that may linger for some), it ultimately is a film that could have helped a lot of farmers get their stories out there, and it's a shame people like Jonathan got left hanging when, really, Spurlock's personal failings as a human doesn't impact the movie or its message in the slightest. 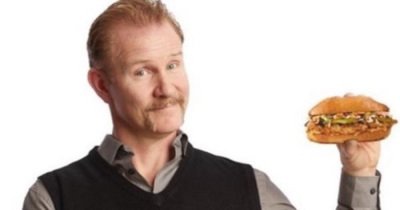 By the end of the film Spurlock opens his Holy Chicken restaurant in the movies most hilarious middle finger to the food industry and promises to continue doing what he's doing.  That might be a little harder for him to do since no one wants to work with him at the moment.  However, I hope he does continue to do what he does.  A follow up film about what life is life after getting #MeTooed might be a logical (and fascinating) follow up, but I feel his main concern is in the food we eat, and now that 'Super Size Me' is both a movie AND fast food franchise, I think coming back with a new one every ten years to keep the public updated on how the food industry is operating would be both smart and entertaining!  Because, hey, if Hollywood is going to turn everything into a franchise, why not make a franchise where a guy continuously gets sick by eating fast food products?  It's certainly no more disgusting than the 'Jackass' movies.