I'm sort of at a loss for words as I sit down to write my review for “Batman v Superman: Dawn of Justice.” Batman is one of my all-time favorite characters. I consider “The Dark Knight” to be the best movie the superhero genre has to offer and is still the golden standard for which other movies in the genre are measured against. Likewise, Superman has always been a personal hero growing up, because I can relate to the whole outcast trying to do good to others mentality. All of these facts are true, but what is also true is that “Batman v Superman: Dawn of Justice” is one of the worst pieces of garbage to hit the cinemas. Less fun than “Fantastic Four” (2014 version of course), more pointless than “The Hunger Games: Mockingjay – Part 1,” movie goers who want to have a good time will be better off seeing “Zootopia” for a third time.

The fact that this is a relentlessly dark and violent movie is not the issue as far as I see it. The problem isn't that the storyline is so preposterous it crumbles under itself (it's really not THAT bad). It's not even Ben Affleck as Batman, whose casting irked the internet so much about news of his casting that fans signed a Change.org petition and sent it to President Obama to get him to personally fire the man. No, the issue at hand is that director Zach Snyder had a perfect film – one that was potentially better than “The Dark Knight” – right in his hands and he dropped the ball when it mattered the most. The story goes that Superman (Henry Cavill) has sort of become a bit of a polarizing figure in the world. Some people think he's a savior of humanity while others believe he is a false God.

Congress wants to take him to task for the damage he inflicts on the cities when he saves people. We even see the end of “Man of Steel” from another point of view, where Superman fighting Zod is not him saving humanity, but rather killing many innocent people during a prolonged fist fight (I had my own concerns about this very thing during that movie). One of these observers is Bruce Wayne (Affleck), who has friends who die during this fight. Bruce is on the side of the fence that Superman is too powerful to let live, as this is a man who could easily wipe out the face of the Earth (as he almost did to this city) and no one would be able to stop him. Now, I want to pause here and have everyone look at this story description. I want to point out that this is actually about something.

There is a genuine conflict to be addressed here. Superman may be a good guy, but there is some concern that in his quest to save lives he may inadvertently be killing more innocent people in the process then he is saving. For that matter, as reporter Clark Kent, Superman is obsessed with the vigilantism of the Batman, as he fears that this man operating outside the law is dangerous and puts too many people at risk. It's sort of interesting that he sees the situation this way when he can't see that same thing in his own life. What we ultimately have is a movie about two men with goals of doing as much good in the world as they can, but ultimately disagreeing with each other's methods about how to achieve these goals. This is the sort of storyline real movies are made from, not mindless entertainment. It's a great setup and the execution for the first hour or so is about as perfect as it can be.

The film drops the ball in a very serious way halfway through though. Because we live in a world where movies have to be extensions to expanded universes that include multiple films, we can't have standalone movies anymore. Now our movies need to include dream sequences that won't make much sense until future movies are released. Now they must have cameos from characters who will have their own films at one point (hopefully) but have no reason to be in the movie you're currently watching. And, of course, there must be the inevitable cliffhanger ending that bullies you into buying a ticket for the following film you may not even have been interested in seeing (but if you want to find out what happens next…).

Finally, “Batman v Superman: Dawn of Justice” becomes unbearable to watch when it's time for the two characters to face off in their much publicized duel. The setup for the match is not the result of differing ideologies or a situation that went so wrong someone decided to bring the other person to task for it, but rather it is setup by evil Lex Luthor (Jesse Einsenberg). Why does Luther set up the fight? Because he wants Superman dead. He's one of the people who sees him as false God, but unlike other people he has the wits and resources to potentially take him down. Eisenberg's performance as Luthor is actually one of the standout things in this movie, as he plays him with a sense of humor and energy that is ultimately just a mask for how unstable the man really is.

The performance may work but the motives do not. I don't need to feel sorry for Lex to understand why he hates Superman, but I want…well, SOME reason for him to want the man dead! At least throw in that Superman is bad for business because it makes the selling of weapons (an industry Lex is sure to profit greatly from) potentially useless. Instead we get this forced setup where Lex Luthor goes from scheming political mastermind to spoiled bully who just wants to watch a good fight. At this point my review is officially longer than the average review I write. You should never exceed your reviews by more than 800 words, but now I am passing the 1,000 word count because the film is that much of an objectionable failure. I don't even have time to get into the third act of the film, which is utterly pointless, has no reason for being here, and is nothing but violence piled on top of noise. 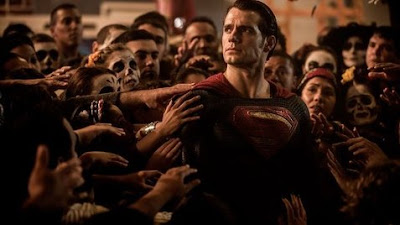 I can say with certainty that if you have been reading comic books for a long time many of Easter eggs, prolonged fights, and unexplained motivations will make sense. In truth, the dream sequences and the cameos didn't confuse me because I didn't understand them (I did), I just didn't understand why they were in this. “Batman v Superman: Dawn of Justice” is not a movie: It's part one in what Warner Bros. hopes will be a massive multiuniverse series to sell millions of toys. The problem with this thinking is that these characters are so well loved by people you don't need to set up future films to get them to see them. They will gladly pay their money to see them anyway. The last fifteen minutes in this film would be a perfect opening to the next film. Too bad the art seems to actively be on the chopping block for the marketing. The biggest sin of “Batman v Superman: Dawn of Justice” is that it was on the verge of being one of the best films of year. Instead it's the worse Kellogg's commercial of the decade.

P.S. There are rumors that there is an R-rated directors cut of the film coming out on BluRay later this year. I am genuinely interested in seeing it, if only because if this is the amount of violence the MPAA considers to be okay for teenagers, I REALLY want to see what their opinion on adults only violence looks like!