"April and the Extraordinary World" Review

It’s amazing how much my faith has been restored in the family feature film this year.  Not only did Disney’s “Zootopia” surprise and enchant me three weeks ago, but this week has resulted in not one, but TWO family films that are also potentially two of the best films of the year!  The first is another Disney animated movie called “The Jungle Book,” which is going to be a financial hit in addition to receiving much praise from most people who see it.  The second is a movie that is likely going to be overlooked to a criminal extent and will be lucky to develop a cult following on DVD.  This is “April and the Extraordinary World,” and it lives up to its title in every conceivable way.  When parents come to me and bemoan the lack of imagination in movies these days, all they have to do is read reviews for movies like this and their faith in quality family entertainment could also be restored. 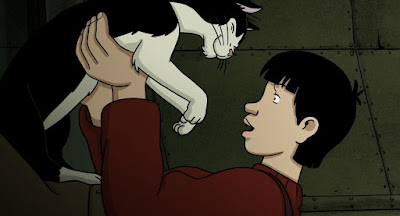 The film imagines a world where science has come to a standstill.  Scientists have been disappearing from left to right, and as a result technology hasn’t advanced to the state it is at today.  No nuclear power has been invented, no gas powered inventions roam the street.  Everything is powered by steam machines and coal produced electricity.  In a strange twist, this old fashioned technology is so intrusive that it takes up more space than the Earth has to produce, to the point where the last oak tree in the world is now kept in a museum.  April (Marion Cotillard) is one of the few scientists who haven’t disappeared off the face of the Earth.  Her parents were killed when she was just a child, and now she spends her days hiding from the law and trying to perfect a potion that will grant everlasting life to the one who drinks it. 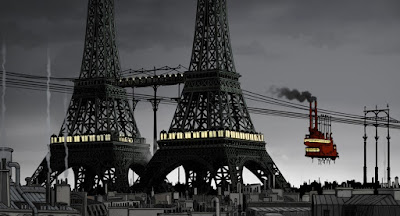 While this would normally be the holy grail of scientific discovery for many of us, in this alternate timeline this is something to be feared by man.  The reason April’s parents were hunted by the government is the same reason she is being hunted: Because this is a world that fears the implications of progress so much that it would rather harm itself with antiquated machines than make the world a better place.  It’s this sort of paranoid fear that gives the villains of the film their motivation to kidnap the world’s scientists and put them to use before the government catches them and put them in jail to rot.  That means we have a family film where the villains might be the unintentional heroes of the story, while the heroes may be the unintentional villains.  It’s a paradox that hasn’t been explored in a family film since…well, okay, since “Zootopia.” 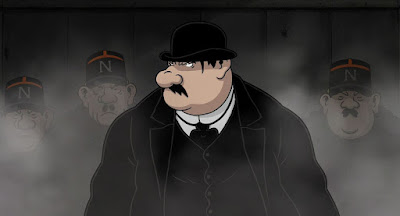 Isn’t it nice to know that complexity will work multiple times a year though?!  Sorry, that was mean.  I’m sure the directors of “Minions” had just as much respect for their characters as the directors of these fine films did.  Still, it IS nice to see a movie where the conflict isn’t so black and white.  The world created here is beautiful to look at, yet is so obviously terrible for the environment that it inspires mixed emotions throughout.  April herself is a great character who is smart and scientific, but she is also pretty and doesn’t mind accepting help from a man.  Her goal is to save mankind, not solely to take credit for changing the world.  This is an example of what a true feminist movie looks like: It’s where the women work with the men in their own unique way, rather than push them away just to prove a point. 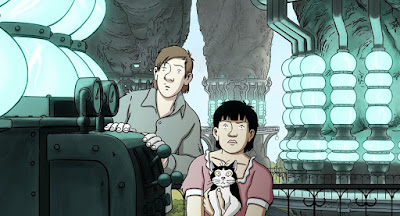 For all the political ideas and philosophy though, this is ultimately just trying to be a high quality movie.  The look of the film is a genius combination of hand drawn animation and computer animation.  Or…maybe it’s the other way around (it’s hard to tell sometimes)?  It somehow manages to be beautiful and ugly looking the same time.  Trust me, you have to see it to understand.  Also, for how sophisticated the story is, it’s funny how much of the film screams “marketable” in how toy friendly it is!  April has a talking cat named Darwin who plays a major role in many of the events and the villains are two mutant lizards who walk around in Terminator style suites.  Trust me when I say that while I was absorbed by the story and characters, I left the theater wanting action figures for those lizards more than any toy that has actually been made so far this year. 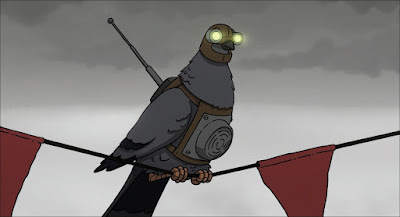 In many ways, “April and the Extraordinary World” is the biggest family hit of the year in the making.  It has the emotion of a Pixar movie and the imagination of some of the best animation in the past five years.  It isn’t a combination of two different styles into one, but rather a unique entity unto itself.  I dutifully make it a point several times a year to discuss what a shame it is certain movies will not become box office hits, but this is one of the saddest times I have to write that.  This should be one of the highest grossing films of the year.  It has the potential to be one of the top five best films.  I have rarely wanted reviews to steer a ship in the right direction as much as I have here.  But there is no turning the ship.  Even in its native country this movie was a bomb.  Despite having an all-star dub by GKids, this will limp into a few dozen theaters and limp out without having gotten many viewers. 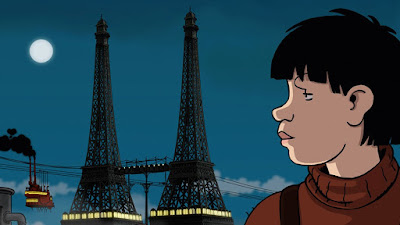 The saddest fact in all this is that none of this is even anyone’s fault.  The movie is directed with gusto.  It is one of the best looking films you’ll ever see.  The makers put their heart and soul into it as did the people who worked hard to bring it to American audiences.  This is a perfect example of a great film that will never find an audience for the sole reason because…I don’t know, the world is just too obsessed with Marvel and Star Wars these days?!  The critics will help this out though?  Eh…no, the public shunned what we do a LONG time ago!  Now we pretty much continue writing about these types of movies because what else are we going to do? I wish more than ever that what I did made a difference to movies like these.  I wish there was some way to make this even just an underground hit.  Sadly, “April and the Extraordinary World” will just have to be extraordinary film without an extraordinary audience.