It has been fifteen years since the release of Warner Bros. much anticipated film adaptation of the popular children’s novel “Harry Potter and the Sorcerer’s Stone” hit theaters.  Despite the time that has gone by, I can still remember the atmosphere surrounding the release.  Depending on when this review is read it may be hard to imagine, but the book was everywhere.  And I mean EVERYWHERE! It was the only book I can remember that kids my age wanted to read.  I had already read it long before it became a ‘thing’ (through a story that is fun to share with people in Uber’s and Lyft’s), but this was the first time other people my age had read it.  Not only were people reading it, they were loving it.  So much so that a movie adaptation, at one point desired by the general public, was met with apprehension.  People were actually afraid there would be too many changes and the source material would be ruined. 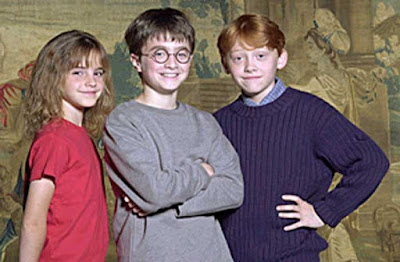 It’s sort of funny to think back at that time now because those fears were all for naught.  “Harry Potter and the Sorcerer’s Stone” ended up being one of the most faithfully adapted books I can think of, where the changes and omissions were so minor that virtually all of my friends (with the exception of one who’s such a book purist he can’t be pleased at all in this situation) were happy with it.  The passage of time also gives us a new perspective of this desire for authenticity.  Later movies would be forced to cut major chunks of the books out for time purposes, but with just barely more than 300 pages, the first book had no real reason to lose anything major.  The problem, in hindsight, is that it didn’t lose much of anything, and maybe it should have.  While the book was lean, it did present readers with multiple adventures and scenarios for our heroes to go on and get out of. 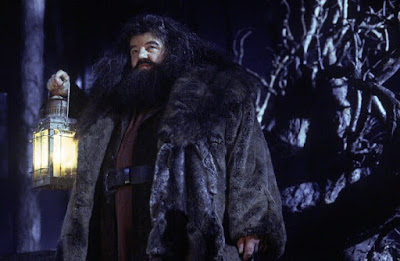 Both the book and movie follow a young boy named Harry Potter (Daniel Radcliffe) who discovers he is a wizard on his 11th birthday, and is invited to attend Hogwarts School of Witchcraft and Wizardry.  He discovers this magical world that has existed right under his nose, makes friends with Ron Weasley and Hermione Granger (Rupert Grint and Emma Watson), and discovers that he is famous in this world because he is ‘The Boy Who Lived.’  When he was just a baby he was attacked by an evil wizard named Voldemort, who killed his parents but failed to kill him.  No one knows why he couldn’t touch the boy (with the exception of a lightning bolt shaped scar on his forehead), or what happened to him afterwards, but it was one of the most important events to happen in the wizarding world.  The movie gets all this down perfectly and sets the building blocks for one of the great fantasy adventures of our generation. 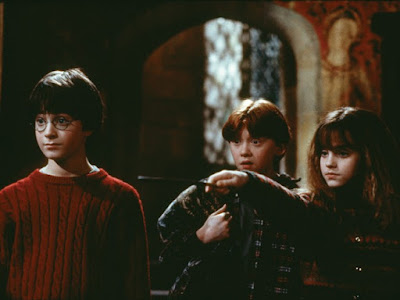 This also doesn’t take up nearly as much of the book as you would think.  It was a great hook to be sure, but author J.K. Rowling was more interested in developing her characters and telling the story of an orphan boy finding his true family first and foremost.  It focused on the small adventures they went on, only slightly hinting at the bigger things to come.  The best moments came not from fighting any monsters, but by the kids worrying about their potions exam.  The movie does the same as it shows Harry developing a father figure in school headmaster Albus Dumbledore (Richard Harris) as well as a deep mistrust of suspicious potion teacher Severus Snape (Alan Rickman), who as most fans of the books will tell you is not what he appears to be initially.  Like the book the movie also introduces Quidditch, which is sort of like Soccer on brooms.  This sequence has always stood out because I remember reading about the game in such detail I was wondering if it could be replicated on film, only to discover with joy that it absolutely could. 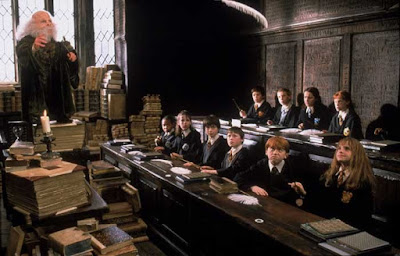 By now you’ve probably read more comparisons to the book than you would care to.  This is usually counterintuitive for critics as the movie should never be compared to the source material, and should, instead, be judged on its own merits.  I make an except in this case because how the movie stacked up to the source material was a big deal at the time, and overshadowed the movie itself.  That the film was a faithful adaptation gave audiences a sigh of relief, but ironically, this is what is now its biggest flaw.  The book was written as…well, a book.  The random adventures the kids don’t always have much to do with the main story.  In some cases they don’t have anything to do with the main story at all.  In several cases they exist just show off the magical world the author created.  For a book, this isn’t a problem since people can put it down and come back later.  For a movie, this isn’t always functional. 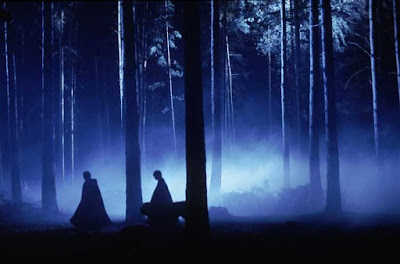 While not overly long at two and half hours, there is a sense that a less than two hour film would have resulted in a stronger narrative.  There are several random scenes that exist almost like individual shorts stuck between the main story.  While it is nice that minor characters like Nearly Headless Nick (John Cleese) are included for fans of the book, for the movie itself, their inclusion doesn’t mean anything in the long run.  This could also be the fault of director Chris Columbus, who is not a visual film maker, and was likely hired specifically because he wouldn’t do anything daring with the source material.  He would make the film that the studio and the fans wanted.  While the film is great to look at, it also looks like something most directors could make, and we’d have to wait a few years before this series would take a few chances on the visual world it took place in. 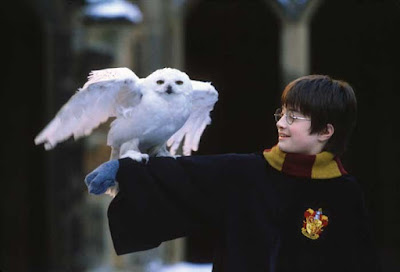 The result of “Harry Potter and the Sorcerer’s Stone” is supremely weird in the sense that it still holds up extremely well, it IS modern classic many of us claimed it to be all those years ago, and yet it is a little more awkward than we originally realized, precisely because it was the very thing we wanted and expected it to be.  Given a chance to recut it, I think a little trimming would have made for a slightly stronger movie.  That said, unlike the book it was based on, the movie was known upfront to be a multiple film franchise, and as such this is one of the best set ups I can think of.  It properly introduces a world, drops hints at things to come, but ends in a way that should the viewer decide not to continue with the whole affair, they can do so and feel like they’ve gotten the most important stuff already.  The idea that someone wouldn’t want to continue Harry’s journey might sound sacrilegious to fans, but it’s refreshing that a franchise ends on an inviting note rather than a threatening one.