The thing you need to know upfront about “Kingsglaive: Final Fantasy XV” is that this is not a movie.  I know I’ve said this before in other reviews, but I mean this in a very literal sense this time around.  This isn’t a movie; it is a prolog to a video game that is set to be released this November.  The video game in question is “Final Fantasy XV,” one of my personal favorite series, and one that has largely been enjoyable thanks to the sprawling, epic stories each game tells with great characters.  For a series that is known largely for its story and characters, you would think it would be ideal for adapting to film.  Yet every single time they try the results end up being very lackluster.  It’s hard to figure out why this is the case, though I suspect the different formats may have something to do with it.  When a game has forty hours to play around with, you can take any concept and do lots of different things with it. 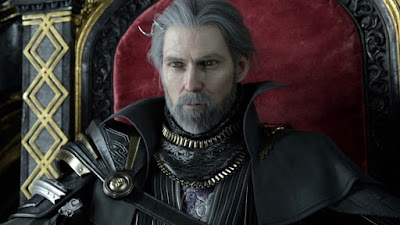 In contrast, “Kingsglaive: Final Fantasy XV” only has two hours to tell the story it needs to tell, and that story isn’t very interesting.  It is one of those movies where there is a war between two nations, peace talks emerge, and then things go horribly wrong.  Our protagonist is Nyx Ulric (Aaron Paul), who is one of the king’s loyal soldiers that questions the peace talks that are about to take place.  He does this partly because he doesn’t trust the other nation to hold up their end of the bargain, but also because he is unsure about his place in a world without war.  It is a setup that is certainly cliché, but one that has plenty of opportunity to develop into something grand.  That this movie doesn’t pull it off isn’t too surprising.  It is too short to get into the real politics of the matter, the history of the nations, or the consequences of the people if a peace treaty is signed.  Heck, it barely manages to develop its main character properly.

There is another character named Lunafreya (Lena Headey) who has a magical item of some sort that could be the key to ending the war of course, and Nyx needs to protect her long enough to get the item to some prince (who we never see).  She exists largely to be pushed and pulled from one direction to another.  Since ‘Final Fantasy’ games are known for their strong female characters, this shallow representation of the opposite sex is certainly a little disappointing.  To the films (very little) credit, at least we get to  see what the magical item actually does, which gives us a reason to care about whose hands it falls in (or on).  What keeps me from completely ripping into this movie is the knowledge that this IS, essentially, a commercial for an upcoming game!  The creators have been very upfront about this.  The events in this movie are merely a stepping stone into the larger universe that is about to be unleashed upon us this November.  There is also a TV series that shows other sides of the story.  The main crux of all this will be found when the main game hits store shelves, and maybe this will all pay off by then.

Strangely enough, the producers have taken some steps to try and make “Kingsglaive: Final Fantasy XV” appeal to a general audience who will never play the game.  It features big name voice actors like Paul, Leadey, and Sean Bean in the starring roles, but a quick search on IMDB shows that these people will not be voicing their characters for the game.  Adding celebrities to the voice cast does not ensure the average person will like this movie, and the fans are just going to be annoyed at the inconsistency with the voices between products.  It should also be noted that the characters move and talk a little awkwardly, and the only time the movie looks excellent is during the impressive action sequences.  At no point is there any attempt for this to be anything other than what it was supposed to be, which results in something that is quite boring sometimes.  So does this make “Kingsglaive: Final Fantasy XV” a success or failure?  I think it falls somewhere in the middle.  Fans of the game are certain to find some enjoyment from it (like me), but as a standalone product it is a miserable failure.  Maybe this series will someday produce a movie that does the series justice, but it is not today.