"Kubo and the Two Strings" Review

If “Suicide Squad” is a mess of insanity deluding itself into thinking it is a good movie then “Kubo and the Two Strings” is a great movie that will delude itself into thinking it will be successful.  Yes, I am still talking about “Suicide Squad.” Yes, I am also discussing potential box office results for “Kubo and the Two Strings.” A critic is not supposed to do either of these things, but we are at a point in time when maybe the critic needs to adjust his way of thinking a little bit.  At the time of this writing, “Suicide Squad” has been the number one movie for three whole weeks now.  It has received universal scorn and pretty much everything that has been released since then has been ten times better (if the movie was bad or average, it was five or six times better).  By the time of this writing “Kubo and the Two Strings” has been out for one week where it opened at number four, and is proposed to be Laika’s lowest grossing film of all time.  This is no longer a social experiment for how people watch movies; this is pure lunacy. 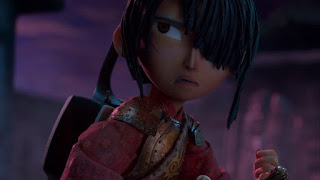 Trust me dear readers, I would SO rather be discussing what makes “Kubo and the Two Strings” such an enchanting, emotional experience for families.  I would rather be praising how the animators had a clear love of not only Asian culture, but also a love of Asian storytelling and sensibilities.  When you read stories of people wondering where diversity is in movies, “Kubo and the Two Strings” is at least one response to your inquiry.  Because here is a movie that takes place in Japan, is respectful of the culture, and uses the customs of the culture to carefully craft an imaginative story with samurai, magic, and monsters!  Our main hero, Kubo, is a wonderful role model for kids of all ages regardless of their ethnicity.  He is kind, a great storyteller, and takes care of his mother who is slipping in and out of reality (in a strictly medical sense, not in a play for laughs scenario).  I have yet to hear anyone praising this film for any of these accomplishments, but they did with “Suicide Squad” because…it had Will Smith in it?

Darn it, I just realized I’m arguing against social editorials for social justice warriors in a review for a kid’s movie.  I really need to stop hanging on Facebook before writing my reviews.  And yet…it seems needed because we do live in a world where people complain about race and injustice.  It is a world where terrible movies are embraced by the public because it feeds them what they desire, not what they need.  We live in a world where, quite frankly, I don’t think people want good movies as much as they THINK they want good movies!  If this were the case, “Kubo and the Two Strings” would be embraced by audiences of all ages, ethnicities, and genders.  Remember when Pixar made “Toy Story” and imagined what it would be like if toys came to life?  Well, Laika has literally taken their own toy box and decided to bring them to life through movies. 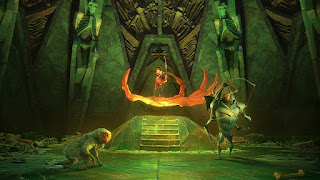 There is a great scene in here with a skeleton monster that towers over our characters.  Watching the film I thought they had just made a small toy and used computers to make it bigger, but an Easter egg during the credits reveled that they actually built a seventeen foot machine and used an electronic dashboard to control it.  This is the kind of imagination you don’t find…well, anywhere these days!  Kubo also travels with a sword wielding monkey and an overgrown beetle, and despite how silly this sounds on paper, it is charming on screen.  The characters are also chased by two evil witches that claim to be Kubo’s aunts, and the action sequences involving them have much more purpose and excitement than the entirety of “Suicide Squad” has.  I really am doing Laika and their film a disservice by constantly bringing up that OTHER film, but it is the sad state of the world we live in where movies are overshadowed by commercial projects! 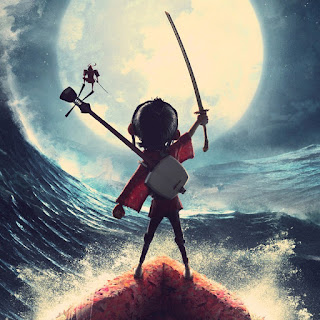 In fact, in writing this review and comparing it to the state of movies these days, I’ve come to conclusion that while the world doesn’t deserve a company like Laika, we as a species NEED a company like Laika!  We NEED a company that produces original works like “Kubo and the Two Strings!”  We NEED a company that takes kids as seriously as they do the adults!  We NEED films that make people want to make movies in general!  We NEED a studio that says no to sequels and shameless cash grabs!  Laika may not be the saviors of the modern day movie, but they are rebels in a business that has no need for their style of storytelling, and that is one more reason that we NEED them, and just as good as any reason I can think of to see “Kubo and the Two Strings!”  Also, the movie itself is great.  I mention that even though I acknowledge greatness is the last thing audience’s desire from their movies these days.