Years ago when Edward Snowden became a public whistleblower on the NSA spying on the world, I had a funny feeling that it would one day become a movie that Oliver Stone would direct.  The (at the time) new controversial public figure seemed perfect for the film maker who was known for tackling controversial subjects.  In this case he was gift wrapped someone who is simultaneously called a hero, traitor, criminal, and patriot (amount other things).  The story also seems tailor made for Stone because this is a very complicated situation where Snowden can be either the villain or the hero at the end of the day.  After viewing “Snowden” I have a strong feeling Stone is of the belief that he is a hero and did the right thing, but he is too much of a creative genius to let his movie move in such a straightforward fashion. 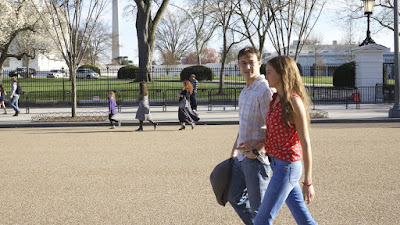 I must say upfront that while I have read a lot about the situation and seen the Academy Award-winning documentary “Citizen Four” (which, ironically, this movie uses as a framing device), I am by no means an expert on the ins and outs of the facts behind the story.  On the surface some events ring true while some feel more dramatized than anything.  At this point in my life I have come to expect that film makers like Stone are not making movies to be objective, but to be subjective.  That’s why I can enjoy “JFK” despite its multitude of historical inaccuracies, and that is the main reason I can watch “Snowden” with a bit of sanity.  Because this is a movie that has great editing, acting, story twists, and a haunting ending that leaves you thinking long after the movie is over.  To a certain extent I don’t care if it is true because it plays on our emotions expertly, which is what the best movies do. 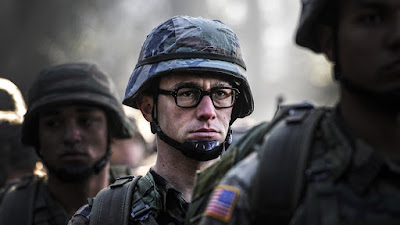 This movie is largely held together by a strong performance by Joseph Gordon-Levitt, who arguably brings the first true human portrayal of the man I have seen.  All the interviews we see of the real Snowden shows a man who is private and introverted.  He was obviously pushed to the edge to do something he would clearly rather have not done, but he talks in such a stoic way that it is hard to figure out what his deal is sometimes.  In what might be considered a break from reality, Levitt plays Snowden as a man who cares deeply about his country and the people around him, who at one point was even a pretty outgoing guy.  Only after he starts working for the CIA and sees how information is gathered does he start to eventually break down and become less of a man and more of a hard shell that walks around. 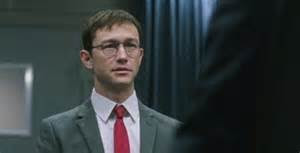 Stone makes the right choice to first focus on Snowden as a person, saving the technical jargon for later on.  When we do get to the scenes that describe how central network servers work they do so in a way that makes it so that everyone in the audience can understand what is going on.  It is the kind of visual imagery that served “JFK” so well all those years ago, and it is nice to see that same technique being used for maximum effect here.  There are multiple other characters like Snowden’s girlfriend, the CIA boss who gives him extra opportunities, and even a nice supporting performance by Nicolas Cage as a teacher of old computers.  They all support the story in their own little ways, but make no mistake: Joseph-Gordon Levitt is the glue that holds this film together, and it is by his performance that the movie has the heart that it does. 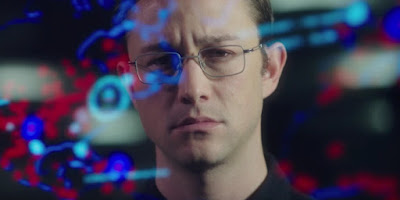 What ultimately helps “Snowden” achieve the brilliance it does is not in whether or not audiences believe in the subject, so much as it matters whether director Oliver Stone believes in it.  And I can assure you he very much does take this story seriously.  This is a man who during a promotional tour warning people that the government could be using “Pokémon GO” as a way to monitor your everyday movements.  Crazy as the man is in real life, he does manage to channel that craziness into his art, and that art – whether it is true or not – is as exciting to watch and study as any other modern art pieces.  Also, Stone actually does mention time around that this is a dramatization before the movie starts, so there doesn’t seem to be a reason to hate on the man for his shoddy journalism at this point.
P.S. I almost forgot to mention that the movie – for all its political revolving’s – is surprisingly apolitical, as Stone has no higher an opinion of Obama than he does Bush, and views both our current presidential candidates with fear and suspicion.  After watching “Snowden” I can understand why.