"Teenage Mutant Ninja Turtles: Out of the Shadows" Review

The whole concept behind the Teenage Mutant Ninja Turtles is one that you either just get or you don’t.  I feel somewhat like a hypocrite having said that, seeing that, while I can probably be labeled a fan, I am more of a reserved one.  I acknowledge the fun behind the stupidity, yet I also acknowledge that the whole concept is kind of, well…stupid.  I mean, does it even make sense for the reptiles to have a love for pizza in the first place?  So I acknowledge this isn’t a franchise that is going to ever be high art.  Why then did I take so much offense to the first film in this new live action series, which I awarded a single star and even put on my Top Ten Worst list of the year?  Honestly…it’s sort of hard to remember why.  Upon viewing the sequel, “Teenage Mutant Ninja Turtles: Out of the Shadows,” I believe I have come to a better understanding of not only these movies, but the franchise itself.

The last time we went through this I focused on the dreary mood, the lackluster acting, and those horrible, HORRIBLEY ugly turtle designs!  There was probably no fixing that last problem this late in the game, but I think the first two have been addressed.  The atmosphere of the new movie is much more light hearted and fun.  It’s as if the screenwriters realized they were taking themselves way too seriously last time, and committed to not being so joyless this time around.  This also extends to the actors, who previously acted like they were in something important, but this time around they seem to acknowledge they are playing second fiddle to computer animated reptiles, and are content to act accordingly.  Why, even the evil Shredder has decided to open up a portal to an alien world (where in the previous film his ultimate goal was to make money).

In terms of film making, “Teenage Mutant Ninja Turtles: Out of the Shadows” is a marked improvement when it comes to camera movement, editing, and use of 3D.  It feels more like a cartoon this time around (and this is to the films benefit).  In fact, a chase scene on the freeway that involves shotguns, motorcycles, and a garbage truck that functions as a secret military base is one of the more memorable scenes I’ve seen in a film this year.  It shows how much fun action can be when you shake things up a little bit.  Why, there is even a genuine conflict the turtles must fact that has nothing to do with how much butt they can kick.  So, if “Teenage Mutant Ninja Turtles: Out of the Shadows” is so much of an improvement over the previous film, why do I still give it a failing grade? 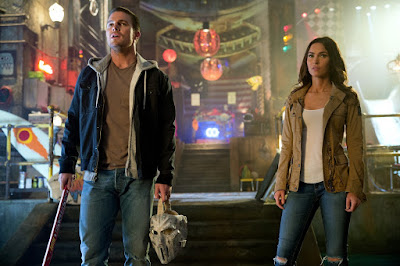 Um, you see, this is going to sound strange, but the film isn’t…stupid enough, I guess.  It’s hard to pinpoint exactly, but there are scenes that contain clichéd writing that just drag.  There are moments of seriousness that seem out of place with the playful nature of most of the film.  It feels like this should be a fun family movie, yet there is too much language and intensity for parents to be able to safely take their kids to see this.  For as much as the film makers have learned to take themselves less seriously, there is a satirical edge that earlier adaptations of this property have that this incarnation is still failing to grasp.  It’s missing the sort of bite that made the comics leave such a big mark on the world (and pop culture in general).

It’s interesting though because it almost feels like I SHOULD recommend this…I just can’t bring myself to.  I mean, this is as close to a good movie for the general public as a Ninja Turtles movie has ever gotten before, but it’s still stuck between being the true silly fun audiences would love to see and having conventional storytelling that you can see in pretty much any other summer movie.  I suppose this means that (surprise, surprise) fans of the franchise should love “Teenage Mutant Ninja Turtles: Out of the Shadows,” but the film makers have just a little further to go if they are to court people who aren’t sold on the idea yet.  If it’s any consolation though, this is probably the most positive review to a negative movie I’m going to write all year, so they should take pride knowing that they were very close to cracking the formula this time around.