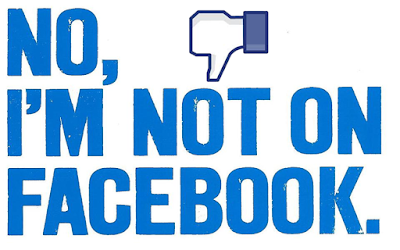 I have not been on Facebook for a couple of weeks.  I wish I could say I got off because of some grand gesture or noble purpose, but the reality of it is that I suffered a serious lapse in depression, cut off all communication from the world, and deactivated my Facebook account to prevent people from reaching out to me.  Some would say that is a bad reason to get off Facebook because, hey, how can people help you if they can't reach out?  Well, my true friends have been able to reach out to me through e-mails, my phone number, Miitomo, and by simply coming to my house and knocking on the door.  I am doing much better emotionally now and am not in the state I used to be.  I am keeping my Facebook deactivated until after the election though, as having to read daily amounts of stupid from people I respect was probably contributing to my frustrations (on both sides).  During my time off though one thing is clear: Not having Facebook has been pretty liberating.

There is another clear truth though: Not being on Facebook has been damaging to my website.  While it certainly isn't news to me that more people are consuming their news and media through social media sites, it didn't really dawn on me how true this was until I was off the site that I realized just how much it would affect my readership.  I do have a Facebook page (link above) and I share my reviews and articles there.  Since I have not been on Facebook for a few weeks my new stuff has not been shared on those pages.  My Twitter account won't post my links while my Facebook account is deactivated, so if people want to read what my thoughts on "The Girl on the Train" are (review coming in a couple days) they have to come straight to the original source.  People rarely go to the original source anymore though.  They are used to being fed their daily reading material through an algorithm on a social network.

My readership has dropped from hundreds to dozens per review, with the last couple not even breaking into double digits.  It is rather... frustrating, to be honest.  It is an honor that people enjoy reading my reviews and commenting on them, but it's pretty clear most of my readers never actually go to my site at all.  They simply wait for the review to pop up in their news feed every morning.  Which, you know, that's fine for the most part.  I don't care how you read my stuff so long as you are reading it.  What is disappointing is to find that when you do need to get away from Facebook for personal reasons (most of which involve personal sanity) that it can damage your reader numbers so much, to such an extent you wonder if you'll ever recover.  Of course I will recover.  When the election is over I will be back on Facebook, sharing my reviews once more, and they will be read by my faithful readers.

At this point you may even read this editorial.  What this situation has taught me is that Facebook is pretty much key to your site being a success.  If you aren't on the platform you will lose readers.  Not because people don't want to read your stuff, only in that they would rather the stuff come to them rather than seeking it out themselves.  From a branding perspective that seems like a very, very dangerous line to toe.  I always said that I would write whether people actually read my stuff or not, but for the first time in a long time I'm actually in a situation where that may very well be the case.  Unless I depend on Facebook.  I have no problem branching out on other services, but it is a bit humbling and scary to know that one site can control so much of my success.
Tweet