Back in 1954 when Akira Kurosawa was making his (now classic) film “Seven Samurai” I wonder if he realized that it would become one of those timeless stories that would be periodically retold for different generations.  The first remake came in 1960, when a film maker named John Sturges saw the movie and thought it would make for a great western.  The remake proved so good that even Kurosawa himself approved.  Since then I have seen the story inspire Pixar (“A Bug’s Life”), get an anime remake, and now we get yet another version of the story in “The Magnificent Seven,” which is being made with modern day sensibilities and themes.  The fact that the story continues to work more than fifty years after it was first made for a foreign audience not only shows that the story is timeless, but it shows that it can speak to various generations without much altering of the original source. 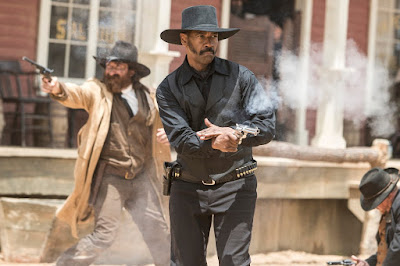 In fact, there are so few changes from various past versions that there isn’t much reason to discuss the story.  If you are familiar with any previous incarnation then you are going to get what you paid for this time around.  New viewers will need little introduction, as the movie plays out like a superhero movie long before superhero movies became a mainstream of the theater.  Where the previous version was anchored by Yul Brener, this time around Denzel Washington is tasked with leading the group of cowboys who are hired to protect a small town against an evil businessman who wants to take over their land and mine it for its natural resources.  Washington is as good a choice as any to star in this remake, as he embodies the kind of toughness needed to be commander while also containing the human sympathy needed to be a great leader men would want to follow. 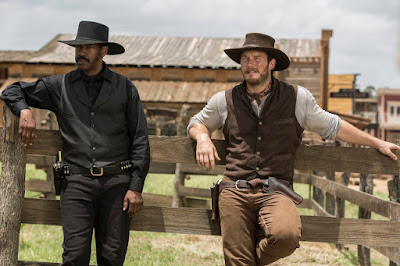 His casting is also noticeable because there was obviously a concentrated effort to make the cast more diverse this time around.  So Washington is black, Byung-hun Lee is Asian, Manuel Garcia-Rulfo is Mexican, and Martin Sensmeier is Indian (Chris Pratt and Ethan Hawke belong in their own, unidentified categories).  Making the cast more diverse does not come off as the gimmick it very well could have.  Rather it shows how bringing in people from different backgrounds can bring different dynamics to the story.  Their cultures are seen even during the many action sequences, and I can imagine director Antoine Fuqua having a great time as he planned out action sequences that would take full advantage of the actor’s unique culture backgrounds.  Speaking of the action, there is a lot of it.  More so than any previous version I’ve seen. 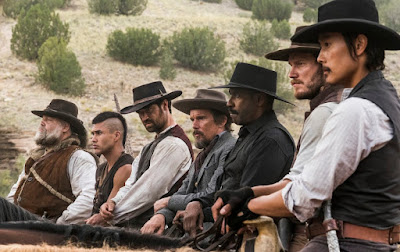 It is also very violent and at times even bloody.  By the MPAA’s (increasingly low) standards, this is an R rated movie that somehow escaped with a PG-13.  That point seems to be a little out of place with where I was going with all this, but I just wanted to make it before I forgot.  Back to the movie, it is interesting that we are getting this movie during a turbulent election where people more than ever want to take their fight to the streets.  Big business and government have rarely been distrusted more in America than they are now, and “The Magnificent Seven” seems to perfectly capture those feelings in a fun, action fueled way.  That little has changed to the story over the year’s means that either it hasn’t aged much or the world has gotten a lot worse since it was written.  I will let you decide for yourselves which it is.