"Fantastic Beasts and Where to Find Them" Review

In a day and age where studios are trying to mine previous franchises for more money, the Harry Potter world may just have given studios (and fans) a golden opportunity to do this very thing without being too offensive about it.  For though Harry’s journey may be over, the world he occupied is still vast and largely unexplored.  J.K. Rowling is a great world builder who reportedly has tons of notes on how things work in the wizarding world that have never been published, but she kept around just to make sure things worked the way they were supposed to.  Now with “Fantastic Beasts and Where to Find Them” she appears to have dusted off that notebook, written a completely original story set in the Harry Potter world, and even has Potter alumni David Yates by her side to help bring it life. 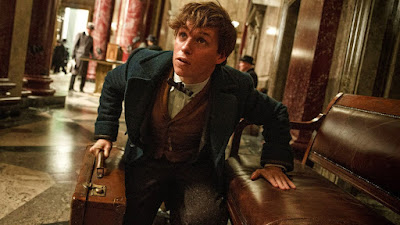 The result is a mostly charming story about a creature specialist named Newt Scamander (Eddie Redmayne), who fans of previous films may recognize as the author of one of the text books Harry read during his tenure at Hogwarts.  Now, we need to stop for a moment and examine this because it sounds like a cheap marketing ploy on the surface to arbitrarily expand a franchise.  And on the surface this is exactly what it sounded like to me.  After all, we have many sequels and prequels, but is Hollywood so desperate to keep things alive they are turning to the school books that the characters from the original series read to keep things going?  In practice this is a good thing though, because Newt was a person.  He obviously lived a life.  He went on a journey to write the text book.  We can witness some of that journey and discover some of the creatures with him.

So while we may be occupying the same world, we essentially have a whole new aspect of the painting to look at.  Who knows how big the picture will be if Rowling gets to complete this vision, but the idea has me pretty excited I have to say!  As for “Fantastic Beasts and Where to Find Them” itself, the movie is all the things I mentioned above and is even a little bit of fun at the same time.  The story doesn’t take place on wizarding school property, but actually in the streets of New York City, where the conflict of wizards living with humans (No-Mag in this case…and culture) are always at odds to the wizards trying to keep their lives secret.  Newt complicates that process in a big way when the briefcase he is traveling with gets opened and sets loose many of the creatures he was traveling with.  He has doubly complicated the matter by showing off his magic to a No-Mag named Jacob Kowalski (Dan Fogler). 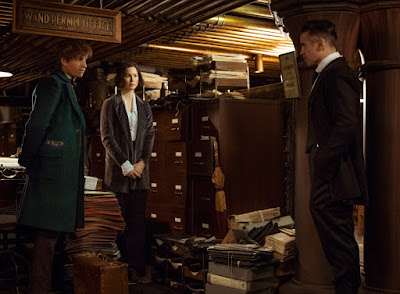 Jacob’s memory was supposed to be wiped after witnessing magic, but he ends up being a key witness in the events, so now he has to tag along with the rest of the gang.  He acts as the straight man for newcomers to the series.  If you’ve been watching the Harry Potter films for years his role might seem redundant, but I had no issue with him since he was not only very likable, but this is a movie that stands on its own regardless if you’ve seen the other movies or not.  His potential romance with a witch who can read minds (Alison Sudol) is one of the movies highlights, because it is a reminder of the humanity this series has that other movies lack these days.  There is also a pretty interesting villain in Percival Graves (Colin Farrell), whose ultimate plans are far more personal and human than that of simple world domination.  In fact, dare I say it, if you overlooked the child abuse and conflicts of interest, his goals in life may actually be pretty reasonable. 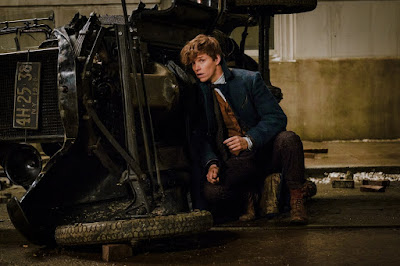 If there is a major weakness to all this is may be in Newt himself, who speaks mostly in a mumble and is rarely engaging in the way that Harry was.  In this movie it’s the supporting cast that carry the movie, and that is going to be a problem if future stories of Newt’s travels don’t include them.  On the other hand, maybe future movies won’t be so beholden to this one either.  I sense this movie is part of a larger experiment to see if franchises can be created within franchises.  It would be a marketers dream come true, sure, but I also sense author J.K. Rowling would benefit from this as well.  Brian Jacques got away with this method of writing for years, and with “Fantastic Beasts and Where to Find Them” maybe Rowling can stretch her wings a bit while keeping her core fanbase intact.  Some may call that a bait and switch, but from where I’m standing I see it as simply a clever magic trick.