I see more war movies than I care to at times.  It is a favorite subject of Hollywood and one that will continue to be highly profitable.  What can I say: people like going to war movies?  They provide all the blood, guts and action that movie goer’s love, yet they have that historical importance that makes it “art” and not cheap entertainment.  It is the perfect genre for a blacklisted director to make a comeback with, and that is pretty much what Mel Gibson is doing with “Hacksaw Ridge,” which is based on the true story of Desmond T. Doss (Andrew Garfield), the only Medal of Honor winner in American history who did not carry a weapon due to religious beliefs.  That this is a war movie, based on a true story, AND takes place during World War II makes the film a trifecta of success.  That it is directed by a man who (if nothing else) has great vision and knows how to pace a scene helps make it great. 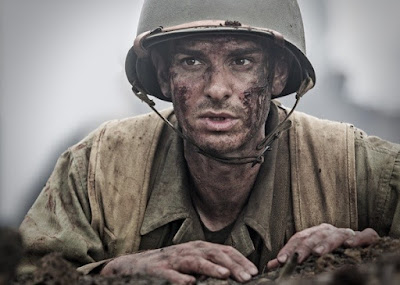 The film is sort of split into two.  The first half we meet Desmond as he decides to join the army and fight in the war.  We see his father Tom (Hugo Weaving) fought in the previous war and did not come home a well-adjusted man.  For these reasons when Desmond does enter the army he refuses to bear arms as he is a medic, and he is there to save lives not take them.  This puts him at odds with Sergeant Howell (Vince Vaughn, in a rare dramatic role for the actor) and Captain Glover (Sam Worthington), who do what they can to get him discharged from the army, seeing him as a liability (with good reason I want to add).  The second half of the movie deals with Desmond in the war itself (that hopefully isn’t a spoiler because…well, why else would they make a movie of him).  Turns out Desmond is not only braver than most of the men who do carry guns, but he saves more lives than anyone else as well. 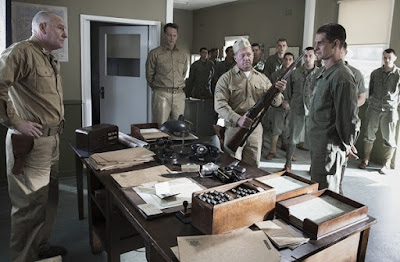 There are even a few Japanese men who he helps in the midst of battle, showing that he does have a Godly heart.  What is interesting is that both halves of the film are fueled by Desmond’s Christian beliefs, and that is what makes the movie all the stronger.  “Hacksaw Ridge” comes out at a time when the religious are being persecuted like never before.  They are being portrayed as uncaring, racist, homophobic, and self-serving.  This is not the case for most believers, but it makes for a good story that someone who follows moral guidelines should fail so spectacularly at them in his personal life.  Who knew that having someone who actually does follow his faith could lead to so much drama?  Not just the enlisting part, but the fact that he puts himself in more danger than can be reasonably expected just because his faith gives him reason to care that much more for his fellow man? 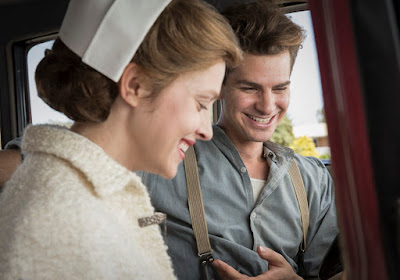 To emphasis what a dangerous thing this is, Gibson wisely decides to make the action sequences intense and overwhelming to a fault.  This may be the most chaotic war movie I’ve seen since “Saving Private Ryan,” where the bullets fly everywhere and the bodies drop with a seconds notice.  Indeed, midway through the film I found myself unable to hold back tears, the experience so immerse and powerful.  But Desmond keeps going back, praying for strength to save “just one more” over and over again.  For these sequences “Hacksaw Ridge” is going to catch a lot of people’s eyes, but I also need to backtrack now and stress that the beginning is what makes the ending so good.  For while the opening isn’t the most exciting thing to watch it does show our character with conviction and likability.  The extensive time spent on his faith does more than make for interesting legal proceedings. 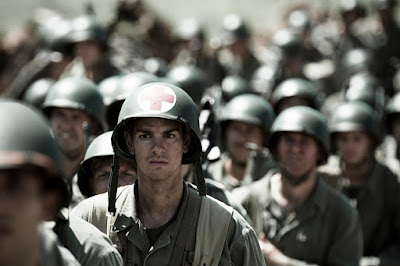 It shows us what a kind soul who joins the army actually looks like, and gives context to the way he ultimately fights in the war.  If there is a major problem I have with the film it’s that Gibson opens the movie with the end shot, more or less cluing people in to how this will all turn out.  It wasn’t as fatal as Clint Eastwood’s decision to murky the timeline for “Sully” earlier this year, but it does make me wonder why can’t film makers trust their audiences to wait for the climaxes?  Are people so impatient these days that they would rather know the ending before they go on the journey?  “Hacksaw Ridge” is one of the finest war movies to be released in the last five years, and either Gibson or the studio should have trusted the audience to be patient.