After spending two movies solving grand conspiracies that were found in ancient paintings and sculptures, Professor Robert Langdon (Tom Hanks) is now on the hunt to find a tree hugging terrorist who plans to unleash a virus onto the world in an attempt to wipe out half the Earth’s population…all while finding clues in ancient puzzles and sculptures to help in the process.  The third film in this series (which started with “The Da Vinci Code”) contains many of the same elements that made that film (and the better but underappreciated “Angels & Demons”) worldwide successes.  With “Inferno” though, I find the shtick getting old and Langdon himself makes the matter all the worse by beginning the movie in a hospital bed, unable to remember what happened to him or how he even got there in the first place. 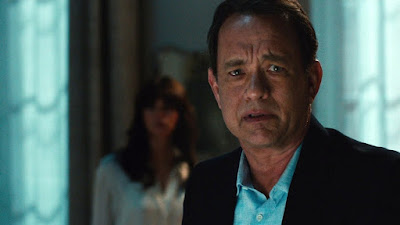 The reason this set up makes the adventure worse is that Langdon’s sharp mind and puzzle solving is what worked most about the previous films, and director Ron Howard (who returns to direct in his third outing with this franchise) found a way to properly visualize Langdon’s puzzle solving process to the audience.  Now his mind is in shambles he can’t remember his middle name, and the visual puzzle solving has been replaced with jerky visions of death and blood, as well as whispering voices that sound omniscient without actually saying anything important.  At this point the only thing that can pull a story like this together is if the solution to Langdon’s amnesia delivers a powerful punch and is involved in a greater conspiracy. Considering the reputation this series has built itself upon you would think this was to be the case, but, alas, it is not. 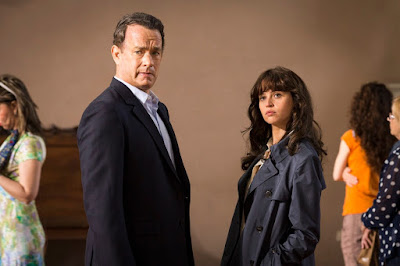 “Inferno” spends much more time trying to find the virus of the mass murderer, and Langdon’s amnesia seems more like a convoluted way to drop the audience in the middle of the story amongst the confusion, rather than at the beginning where we can follow it easily.  There are some scenes where Langdon and the young woman he is traveling with have to go to a museum and look for clues in a painting or the ceiling of a museum, but they are few and far between, and the visualization of the puzzle solving is (again) nowhere to be found.  The woman, I should mention, is Dr. Sienna Brooks, and is played by Felicity Jones.  This isn’t a character that I would have preferred to see Jones play, but she is a blossoming talent, and this is a big studio franchise film, which is the work that pays the bills these days.  Besides, as far as female deuterogamists go, she has more to do than most I’ve seen. 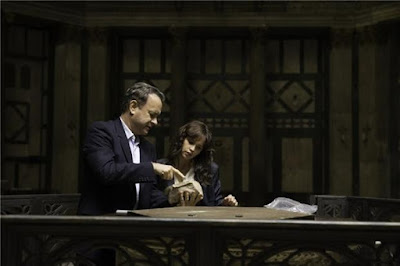 Hanks return as Robert Langdon is more or less what we expect from him at this point.  At the age of sixty I suppose it is getting harder to find juicy roles to play these days, but it is still strange to think that just a month ago we were able to see him in the vastly superior “Sully.”  I suppose I have seen worse movies this year, but “Inferno” follows a disturbing trend where movies begin in the middle of the story, spend a lot of time filling in the pieces leading up to the events, and managing to side step a lot of crucial character development that is needed for a personal connection with the audience.  At this point I can say that I am pretty much done following Langdon’s adventures.  If this is the direction they are going to go then they will soon be as interchangeable as any other action movie.  Besides, the ability to suspend disbelief is getting harder each movie, as my dad does have a point: if the villains want to keep something a secret, why leave all the clues that lead to their downfall?