“Allied” is an intriguing movie with an intriguing premise whose main sin may be that it has one mystery too many.  The unknown is not uncommon for director Robert Zemeckis, who has previously directed movies like “Flight” and “What Lies Beneath,” two movies that had premises that stood on shaky ground.  With this movie we find two people who pretend to be married to one another for the good of the nation and find that sexual tension is hard to resist.  This makes sense since the two characters are played by Brad Pitt and Marion Cotillard, who are considered by many to be a couple of the most beautiful people in Hollywood.  That they would have sexual attraction towards each other is pretty much a forgone conclusion.  However, as Marianne (Cotillard) tells Max (Pitt) at one point, “it’s not the sex that brings people down; it’s the love.” 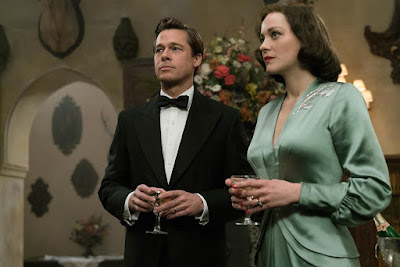 This will become very true as the film progresses, as a simply assassination attempt on one of Adolf Hitler’s generals becomes a twisted tale of sex, power, and betrayal.  When I say “Allied” may be one mystery too many it’s because the movie opens as one thing and ends as something completely different.  It starts out as a story of two strangers who must pretend to be lovers to pull off a job, all while slowly becoming the very thing they are pretending to be.  This was interesting because it became not a movie about an assassination, but a movie where the line between reality and work becomes blurred and hazy.  How can these two people be expected to pull off this dangerous job if they can’t even be trusted to treat each other as a professional co-worker?

At one point Marianne says “I am alive because my emotions are real.” This strongly suggests that she has survived by becoming emotionally attached to her targets and people who are sent to help her.  Does that become a handicap then when it’s time to pull off the job?  The questions just keep on coming and coming…and then they get answered before the halfway point and new questions arise.  The rest of the movie has been heavily advertised in the previews, which I believe was a mistake because it removes much of the tension Zemeckis attempts to set up.  I saw the film before I saw the previews and I want to assume you are in that same boat, but let me just say that the second half was a huge surprise for me at the direction this all took. 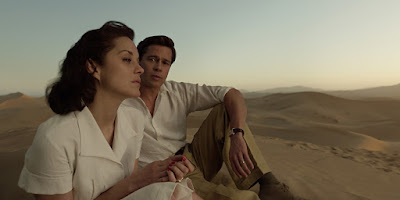 Many of the earlier questions have much more power at these points and even when we get to the resolution there is more questions that must be answered.  To a point where I don’t believe Zemeckis ever properly had time to address everything.  On the other hand, that may very well have been the point.  Nothing is what it seems during war, and I found myself only being able to half predict incoming answers I was given.  Pitt and Cotillard are very likable in a script that treats their relationship as a huge prop for the main conflicts in the film, and the direction and editing is solid enough to never be boring.  I can’t say I was blown away by the ending (or even some of the journey to that ending), but, for a time, “Allied” did make me ponder some big questions, which is probably worth more than any ending could have given me.