“Moonlight” begins with a child hiding in an abandoned house.  He is bullied every day at school and has very few friends.  He doesn’t understand why kids bully him, but the few adults in his life do.  While little Chiron (played by Alex Hibbert as a child) doesn’t understand it himself, he is gay.  Also, he is black.  Being a young, gay black boy in a neighborhood that is known for drugs and gangs puts a target on your back that I suspect few of us can understand.  What broke my heart about this information is the fact that he learns this not because he comes to terms with his own sexuality himself, but because he is called a faggot.  By his mother no less!  The woman who gave birth to this child and is supposed to protect him from the world is the one who regularly enforces the idea that he is weak, broken, and undeserving of love. 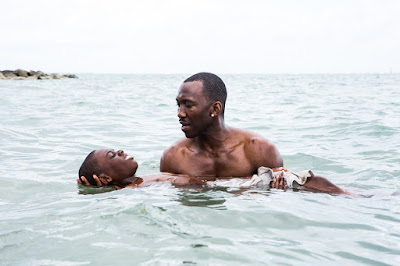 We don’t know this at first of course.  When the movie begins we only see a scared boy who is afraid of everyone he comes in contact with.  This includes Juan (Mahershala Ali), a kind man who takes the boy into his house as he attempts to figure out what to do with him.  He has a girlfriend named Teresa (Janelle Monae) who is also great with handling kids.  Only later do we find out that Juan is a drug dealer.  What’s more, he is selling drugs to Chiron’s mother and contributing to his poor upbringing.  It is ironic that the only relationship this boy has is with the people who are causing the very strain in his home that is so troubling.  All of this is the first act of the film, which serves as the highlight to the rest of the film.  As the movie goes on we watch Chiron grow up and come to terms with who he is.  We watch him come to accept his sexuality as a matter of fact in life.  We see him go from being a quiet mouse to a roaring bear. 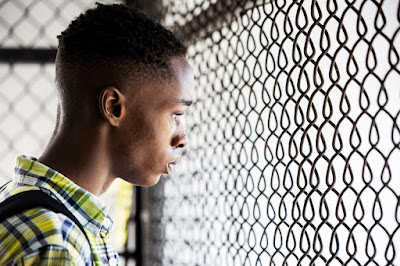 His relationships with the few people who are consistent in his life morph and change.  Sometimes for the best, sometimes for the worse.  We rarely part from him as we literally walk in his shoes and understand what a day in his life looks like.  Though I have seen many films about young gay men who need to come to terms with their sexuality, this may be the most heartbreaking I’ve seen yet.  Even if Chiron wasn’t gay it would still be a powerful story of a boy who grows up in a lifestyle he didn’t choose, having to decide whether he is going to adapt to that lifestyle or die on the street.  The film was directed by Barry Jenkins, who has directed not only a revolutionary film for gay cinema, but has cemented himself as a unique voice in the movie industry, and he is someone whose next project I will be very much looking forward to. 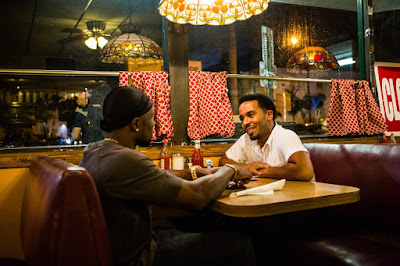 I have avoided talking about much of the later parts of the movie because I don’t want to spoil too many surprises for the audience, but I do need to talk about a misstep early on that keeps the film from perfection.  That is in the handling of Juan, who more or less sets many of the events in motion.  His relationship with Chiron is the highlight of the movie, yet Juan disappears from the movie after the first act, robbing the audience of a potentially complex relationship in the process.  It is not a fatal mistake, but I do feel “Moonlight” may have cut off one of its arms in doing this, and while the rest of the body can certainly function without that arm, it does so with an obvious handicap.  The fact that the rest of the film remains so strong is a testament to how good the movie is as a whole, but it is disappointing to see such a simple mistake in the screenplay.