There is a grand space ship flying in the sky.  It is majestic and beautiful, hurling slowly across the universe while it is on its way to its destination.  It has thousands of souls on board, all sleeping in suspended animation, waiting to awaken to a new century, a new world, and a new life.  All except two people: Jim Preston (Chris Pratt) and Aurora Lane (Jennifer Lawrence).  For them, they have woken up 90 years early.  By the time the ship arrives at its destination, they are likely to be dead.  There is no way for them to go back to sleep and waking the others up would be akin to murder (although the thought does cross their minds at some point).  They can’t speed the ship up nor can they turn around, so they are forced to make the most of their current situation. 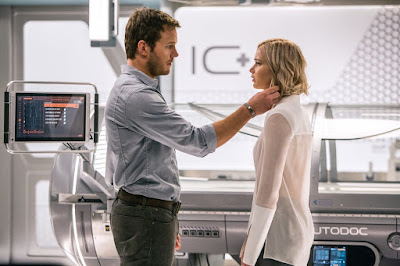 This is the setup to “Passengers,” which begins with a great premise and a lot of promise.  When the movie started it was refreshing to see something that started in an unexpected way and continued to be unexpected as it went on.  It is a great love story as well as character drama.  We like both the characters.  Jim is one of those nice guys who you can’t help but love, and he has the easy going attitude to hopefully make the best of a long term problem.  Aurora takes to the situation a little slower, having had big plans for her life that have now been thrust into chaos, but she too, at one point, figures out a routine and dives into her writing (something I do frequently whenever I’m in the middle of a bad situation). 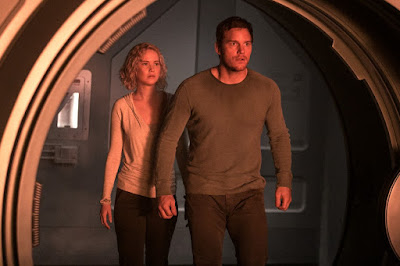 There is also an android bartender played by Michael Sheen, who is the only other thing to hold a conversation with on the ship.  He’s good at fixing whisky and listening to problems, but he doesn’t relate to them in a way humans can.  What can happen is the two could actually fall in love.  This is where the movie actually gets things really right.  Considering these are the only to humans who are going to be awake for the rest of their lives, it makes sense that the two would have sex.  What is nice is that there is a real relationship there.  They have real conversations.  They joke around.  They have little quirks that annoy each other.  They take space walks on the ship that are made all the more spectacular by a great use of 3D cinematography.  It’s the kind of relationship that likely could keep two people sane and hopeful. 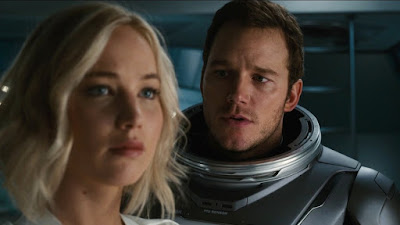 I am confused, then, by a decision late in the film to change the focus from being a movie about how two people cope with isolation (and potential betrayal) in a floating prison to an action movie where things are going to get destroyed and thousands of lives are on the line.  I understand that throwing a lot of money into a science fiction movie is a risky bet in the first place, but this third act attempt to try and appease a hopeful teenage market struck me as a fatal mistake.  It is tonally deaf to the first half of the film and structurally shaky in the second half.  I hope this is the work of studio interference, as the director of the movie is Morten Tyldum, who directed “The Imitation Game” a few years ago to great acclaim.  Maybe this is a sophomore slump, but judging by how good the first two acts of the film are, he should have seen the problem with the third. 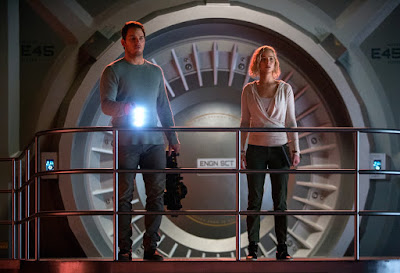 “Passengers” may ultimately be one of those tragic cases where the pieces were all in place for there to be a modern classic, but once money got involved there were changes made in an attempt to make it more mainstream, and ultimately that is going to kill the movie.  People hoping for an action movie will be too bored to get through the first hour of the film.  People who connect with the first hour will likely feel betrayed at the haywire final act.  Despite how good the movie looks and how likable the two lead actors are, they can’t save a movie with an identity crisis.  This is one time I hope that there is an alternate cut of the film somewhere down the road, so that we may see what everyone had in mind when they first started on this journey that (ironically) took its own detour.