There is something about the stage that is magical and inviting.  While we have gotten movies, virtual reality, and YouTube over the years, people still flock to the stage to be enchanted by the live performance.  Likewise, those who want to be stars aim to perform on the stage, to bask in the glory of the live audience and atmosphere.  Though I wasn’t really expecting this to be the case, Illumination’s “Sing” captures these hopes, dreams, and feelings perfectly.  That it captures all this with an all animal cast is all the more impressive.  For parents will watch and admire how authentic the experience feels while kids will watch with glee and beg their parents to take them to a real stage production shortly after the film ends. 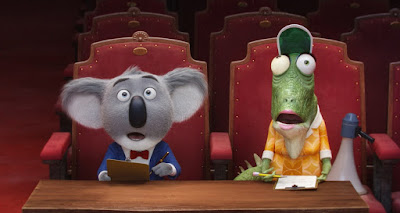 The story revolves around a koala named Buster Moon (Matthew McConaughey) whose theater is in danger of closing after having one flop too many.  He decides that what people really want to see is a singing competition, but his investors aren’t so keen that this idea will work (since this is an alternate universe I’ll assume they don’t have a version of “The Voice” to compare notes to).  Since the investors aren’t helping, Moon will just have to scrap together a prize himself and hold live auditions.  He believes in the show.  For that matter, when people do audition they believe in the dream they have.  The cast of characters is varied and they all have their own stories and musical styles.  You have Rosita (Reese Witherspoon), a pig who once had dreams of being a singer who gave up her dreams to become a dedicated housewife to her husband and 25 piglets and largely sings pop songs. 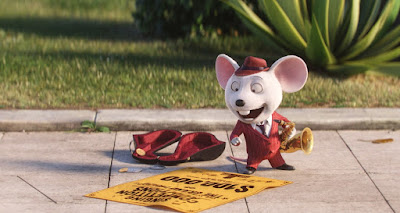 You have a punk rocker porcupine named Ash (Scarlett Johansson), who recently broke up with her unappreciative boyfriend and now channels her anger through rock music.  Though he’s despicable in nature (ho ho…that joke is for those familiar with other movies this company has produced), my favorite talent of the bunch is with Mike, a small mouse voiced by Seth MacFarlane who croons in the style of Frank Sinatra.  I suspect the breakout character for audiences will be Meena (Tori Kelly), a teenage elephant who could be a great singer if she could just get over her stage fright.  What’s nice about all these characters is that they all have their own unique stories and personalities.  When the movie starts it’s easy to think you can predict how everything is going to turn out for them, but it takes some interesting left turns in the final act. 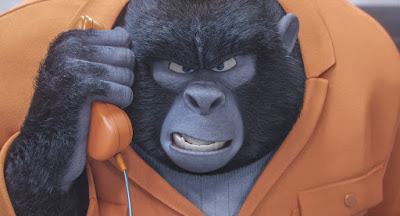 The most emotional of the bunch probably involves Johnny (Targon Egerton), a mountain gorilla who wants to be a singer but lives in a family of thieves.  He doesn’t connect with his father who doesn’t understand how he could have raised a son who wants to sing, so he finds a father figure in Moon, who recognizes the natural talent of the boy and does what he can to nurture it.  In fact, Moon is one of those great lead characters who typically has a smile on his face during great adversity and is always pushing for the best.  Despite the rough patches he faces on a daily basis, there is a shocking lack of sarcasm to be had from him.  He’s just an overall nice guy who just happens to spend many of his days avoiding calls from the bank. 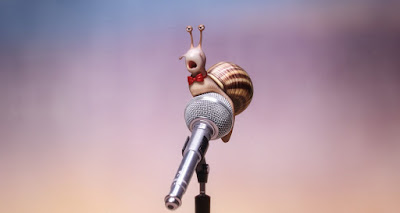 The movie brings all these characters together in a story that starts predictably but ends with a lot of heart.  The third act surprised me in how effectively it brought everything together in an emotional climax.  Before going into the movie I read that there are some 85 classic songs included in the final product.  That means there is always a tune to be sung and they are all placed perfectly.  “Sing” is a movie that plays like a jukebox musical you would see in a real Broadway production, and the songs are a perfect mix of classic and modern.  It’s interesting to see hear Taylor Swift’s “Shake it Off” and Elton John’s “I’m Still Standing” playing back-to-back and feeling like they are paired perfectly.  Chances ae parents will be buying many of their kids the soundtrack as a stocking stuffer for Christmas. 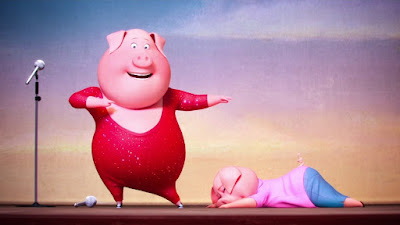 Now, all that said…the setup is a bit cliché.  Some will even argue that with heavy hitting Oscar contenders playing there is little reason to see a movie with a bunch of singing animals.  Some may even think the star grade below is too high.  Keep in mind this is a movie made for families.  This is a genre that doesn’t need to be great to be profitable.  Illumination also released “The Secret Life of Pets” earlier this year to huge box office numbers.  I found the movie to be cute but trite, lacking in any real emotional substance or long term value.  “Sing” still doesn’t quite achieve the greatness of Pixar and DreamWorks, but they have taken a huge step by delivering a movie that has all the energy I’ve come to expect from this studio while adding a healthy dose of drama and heart so that we actually care about everyone.  It is a great success for family movies and leaves you with good feelings (which parents might need after seeing “Moonlight” or “Manchester by the Sea”).