In a year where female characters are breaking out and becoming lead characters that rival some of the best male leads in movies, it is noteworthy that the best of these is not even a character at all.  It is, in fact, a real life 13 year old girl from Mongolia named Aisholpan.  She lives in a land where there is no internet, no computers, and very little technology.  There’s even a chance there aren’t any movie theaters near her, meaning it will be impossible to show her family and friends “The Eagle Huntress,” which chronicles her attempts to become an eagle hunter in her country.  This is a tradition that has been passed down from father to son.  Never before has a girl been made one though, as the women typically raise the children and make the dinner.  This is not sexist for a small tribe; it is simply the way things are. 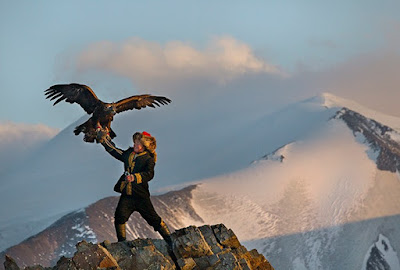 Her father, Nurgaiv, knows this to be the case.  But he wants to keep the tradition alive.  What’s more, his daughter has a genuine passion to follow in the family footsteps, and if she wants to become an eagle hunter herself, he will simply have to train her to be one.  There is resistance in the tribe.  The elders don’t like the idea of a woman doing something that is done by men.  Some of their concerns have merit while others are merely silly.  The situation is more complicated than that of a bunch of boys not wanting a girl to attend a He-Man Woman-Haters Club.  This movie is also more than just a movie where a girl has to prove herself to a bunch of boys.  This isn’t even a fictional narrative.  This is a documentary that blurs the line between documentaries and fiction films. 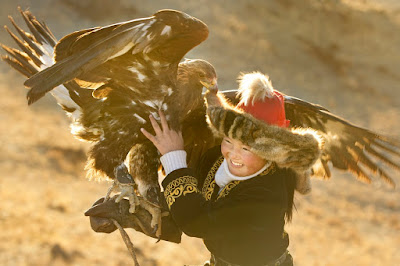 For the people are real in their environment, yet the pace of the film is that of a fictional drama.  We watch the movie forgetting at times that these are real people.  We just get that involved with the story and the events moving it forward.  We cheer when Aisholpan has to scale a deep mountain to catch an eaglet of her own to train.  We also smile when the family eats dinner together and talk about their day.  In a small but important moment that reminds us that people can be multifaceted, Aisholpan feeds her eagle while she paints her fingernails.  Obviously the elders concerns that she is not a real girl because he wants to do something men typically do are unfounded at this point.  In fact, during this moment I could feel the movie was making a huge statement that what a person wants to do does not define their feminity. 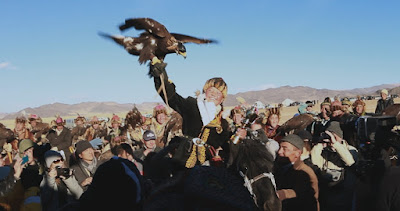 I also must mention that the MPAA showed some rare wisdom in giving “The Eagle Huntress” a G rating despite the topic likely not being of much interest to really young kids.  Most kids eight and up will find the movie inspiring and adults are likely to enjoy it as well.  That there is nothing objectionable in it should not discourage anyone from seeing this wonderful film.  If the idea of watching a documentary doesn’t sound like something you’d like, just approach it as if it were a fictional film.  Lord knows the film makers did the best they could to make this feel like a real movie as opposed to an information packet.  In fact, I’ll even go so far as to say many people might not even realize it’s a documentary.  Regardless of the genre, it is one of the best female empowerment stories I’ve seen in years, and one that accomplishes that goal without demeaning or belittling the opposite sex in the process.