The issue I found with the screening of “Monster Trucks” I attended is that it was a horribly underdeveloped movie with a script that didn’t feel finished and with actors who were acting out in scenes they probably had no idea on how they would eventually connect.  Imagine my surprise when I exited the screening and was told that, no, this wasn’t a rough cut: this was the final cut of “Monster Trucks” that was going to be released in theaters to the public.  This was the movie that the studio actually expected audiences to pay to see.  This is the kind of product that is so fundamentally broken, that if it were a toy a consumer would sue the toy makers for deliberately selling them a product they knew was broken.  On a positive note…this isn’t based off an existing property, I guess? 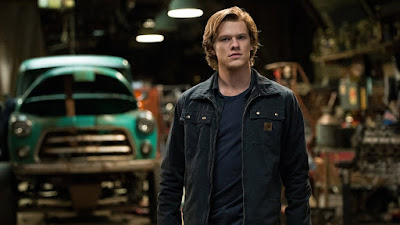 *sigh* Honestly folks, I don’t get paid enough to give movies like “Monster Trucks” that much thought.  To do so would mean that I officially thought more about the final product than the film makers did, and in this particular case that is not going to win me any points with the ladies.  I have far more important things to do with my limited time on Earth than debate the artistic merit of a story where a sea monster becomes an engine for a high schoolers beater of a truck.  I was so bored by this whole concept, that it soon became a pathetic exercise in spotting how many big budget stars were so strapped for cash that they decided they needed to be in this movie just to make ends meet.  I thought by now Rob Lowe’s career would have been safe by now, yet here he is as the corrupt CEO who wants to drill for oil in the very spot the lovable sea creatures are living in.

Amy Ryan has certainly seen better days as the protagonist’s mom, but she’s only in two scenes, so maybe she was just in town on that day of filming and decided to do a producer a solid?  Barry Pepper is here as the step father who is misunderstood.  Never sure why his career never took, but he plays a substantial role here, so make of that what you will.  Also, Danny Glover is in this.  He is an actor who should never be desperate enough for work that he needs to reduce himself to being in “Monster Trucks,” but such is the uncertain world we live in today.  Despite all this talent, they are sort of overshadowed by Creech, the CGI monster who is inside the truck.  Make no mistake that this is animation of very poor and unconvincing quality, but it does move smooth and his facial expressions are great.  Had this been a fully animated film, he would have been some sort of wonderful weird creation.

I suppose it shouldn’t surprise me that the animated creature is the only worthwhile thing in this whole affair, seeing that Chris Wedge has an extensive history in animation, having directed “Ice Age” and “Robots.” To my knowledge this is the first live action film he’s directed.  His inexperience is painfully obvious, and watching the movie would never give you the impression he’s won an Academy Award.  Instead, “Monster Trucks” plays like an amateur film project that somehow got released by a big budget studio who wrote a blank check to the project and decided they’d figure out what it was about as they went along.  The film reportedly had a $125 million-dollar budget.  With that information in mind, the abundance of talent makes a little more sense, because a movie that produces this lousy a final product with that kind of money means that the staff had some great lunches during the production.