As the final Studio Ghibli film to receive an official release in the United States, you would think that the release of “Ocean Waves” would be something of a big deal to fans of the prestigious studio over here.  However, while “Ocean Waves” is a nice little movie in its own right, I think many people would do well to tamper their expectations a little.  It’s easy to understand the allure of something we have been denied for so long (23 years in this case), but it’s easy to forget that sometimes the lure of the unseen is more interesting than what the product actually is.  There was no major loss on our part that we never got this movie until now.  I am not saying I was in favor for keeping it overseas, but I could have certainly lived without seeing this if it came down to it.  It is a simple slice of life story about two teenagers falling in love, except without the drama that was made popular by “Dawson’s Creek” just a few short years later. 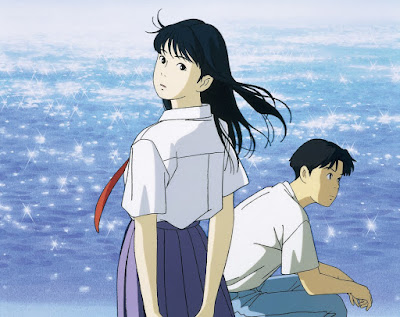 The movie isn’t even really a movie.  It was made as a television special for Japan, where Studio Ghibli could do a cheap product on the quick for some extra cash while giving new animators a project to work on and hone their skills.  The fact that most other countries got it as a theatrical release goes to show that an average project from Ghibli that is deemed worthy of just being shown on television still shows so much quality (especially in comparison to other animation studios) that it can be deemed worthy of being shown in theaters.  I did watch the movie noting that the animation was good, but far less than I what I expected from the studio.  Shadows and lightening were especially non-theatrical in my eyes.  However, I knew about the movies TV roots before going into this, and I doubt the average viewer is going to notice or care much anyway. 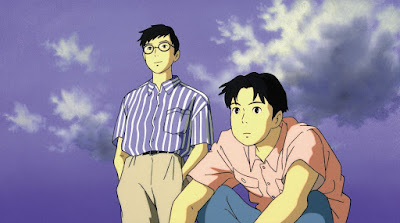 They will likely find interest in the story of young Taku Morisaki falling love with his fellow classmate Rikaka Muto, who is a transfer student that has a reputation for being cold and uncaring.  As with most Ghibli films the reasons for her coldness are slowly reveled as the film goes on, but for most of the time we surprisingly view the situation from a great distance.  Taku is reluctant to get involved with the new girl as his best friend Yutaka loves the girl himself, and is a little more forward with his pursuit of her.  In an American movie, the two boys would become bitter rivals over this fact and spend most the film trying to one up each other.  You have to love Japanese culture then, when it turns out they’re eventually falling out is not based on the revelation that both boys like the same girl, but from the fact that Yutaka is offended that Taku doesn’t show Rikaka the respect he feels she deserves.  It’s a very…unusual, bromance story, to say the least. 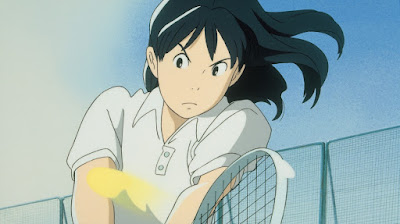 The problem isn’t that the rivalry between the two is developed in this way, only that the way its developed doesn’t warrant the amount of time spent on it.  For me the winning storyline in the movie involves Taku going to Tokyo with Rikaka and finding out the circumstances on why she moved to Kochi in the first place, and how she is (probably with delusions) thinking she can go back to her old way of life.  I’ve still seen this story better, but leave it to Ghibli to be more observant of human behavior than most live action films are about the subject.  When you get down to it, this was a logical story for a TV special.  At fifty minutes, it might have been perfect for what it was.  At seventy-two minutes, it stretches itself too thin (even if that is far from a long amount of time).  Regardless of what you think of the movie in the long run, I think we can all agree TV is where this belonged. 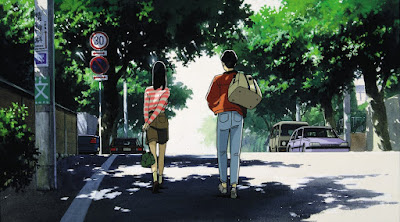 Ultimately, I do believe that the only reason “Ocean Waves” works in the long run is because it has all the little, quiet moments that Ghibli knows how to do well, which sucks us in despite a rudimentary screenplay.  It is a basic movie, basic story, and basic execution.  It is everything it was supposed to be, but ultimately it isn’t bad either.  It is a movie most are unlikely to watch again, but as the movie was a nice stepping stone for Studio Ghibli animators, maybe “Ocean Waves” is best considered a good stepping stones for families moving from the children movies of the studio library into the more adult movies.
P.S. The MPAA has made the stupefying choice to rate “Ocean Waves” PG-13. Except for a comment about a women’s breast size, there is literally nothing here I can think of that would be of offense, and most families will be just fine watching it without objection.