I have to admit something up front with you, my dear readers: I don’t really like what the world has become.  Despite the coolness of the new tech that gets released on a near weekly basis, I can’t help but look around and wonder what has happened to life.  We can’t fend for ourselves.  We spend money just because we get bored with our day.  Parents and children don’t connect the way they once did.  Every time I go someplace to eat I’m amazed at how many dates I see where the couple in question are more interested in their phones than they are with each other.  In “Captain Fantastic” our main protagonist Ben (Viggo Mortensen) feels the same way about the world, and thus lives in the woods with his kids, teaching them to hunt, making their own clothes, and giving them reading material that my parents would never have considered giving me at such a young age. 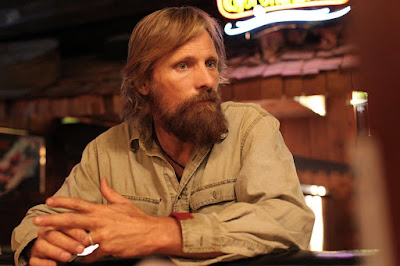 One of his kids even “skips ahead” and decides to read “Lolita.”  When he asks his daughter what she thinks of it, she starts to tell him what it is about, before he interrupts her and says “no honey, that’s the plot. What do YOU think of it?!”  The scene is interesting because while I think most parents would disagree with letting a twelve year old read a controversial book like that, it is clear there is some real teaching going on.  Ben wants his kids to understand the world.  He wants them to know what is out there.  That he cannot see the danger or hypocrisy in taking them out of the real world and forcing them to observe it from a distance is basic human error (albeit, on a pretty grand scale when you stop and think about it).  We cannot fault him for his ideals even if his methods are, more or less, a little dangerous at the end of the day. 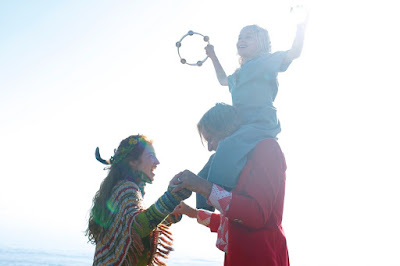 Alas, a major life changing event takes place that forces the family to get into their traveling bus (which seems to be the only high tech gear the family owns) and drive to New Mexico.  The road trip itself brings up some very interesting answers in whether or not Ben’s kids can function in the real world.  The results are…mixed, to say the least.  On one hand, it is impressive that all of his kids actually know what the Bill of Rights is and what it means for the freedom of the United States of America.  On the other hand, when his oldest son has his first kiss with a girl, the sensation is so overwhelming that he proposes to the girl in front of her mother.  Both these scenes have a lot of humor and awkwardness in them, but they also are great in highlighting the strengths and flaws of such a philosophy.  The movie does seem to go back and forth with the question on whether or not Ben is crazy or smart, but the tug of war game helps keep the conflict interesting. Having watched the film and been given some time to meditate on it, I have come to the conclusion that Ben is a smart man of great principle whose ideals may be too grand to fully grasp what reality can offer him.  I have no idea if any of that made sense, but it is the best description of “Captain Fantastic” I can think of.  It is anchored by a great performance by Mortensen, who plays Ben as eccentric, yes, but ultimately smart and with high principles.  His father-in-law is groomed early on to be the films villain, but when the two speak frankly later on we find that this is not the case.  There is a difference of ideas, and Ben might just be wrong with a few of his.  The movie obviously speaks to an audience concerned about the state of the world and where we are going as a species.  If there is a lesson I took away from all this, it might be that blocking the world out for the greater good sounds great in theory, but ultimately learning to live with it can be more fruitful.