When I was thinking of how to best describe what makes “Hidden Figures” work so well as a movie, I find myself once again thinking of a scene near the beginning.  The scene involves three ladies stranded on the side of the road while one of the tries to fix their car that has broken down.  The women are all middle aged and black, which will become important in a moment.  A police officer pulls over and asks them what is going on in a way that tells you he is more offended that they are on side of the road rather than concerned for what they are doing.  They calmly explain that they were on their way to work at NASA but their car broke down and they had just fixed it.  The cop is taken back but then starts talking about how the Russians are close to getting to the moon, and that America better get in gear to ensure that doesn’t happen.  He then offers to escort them to work. 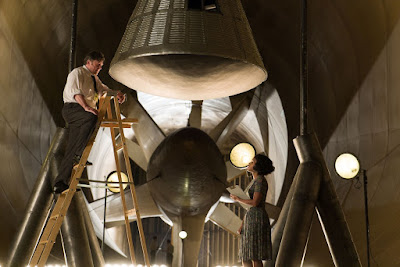 The scene does a brilliant job in doing a few things.  First, it acknowledges the racism of the time period.  Second, it shows who is in power and who is not.  Third, it sets up that we are in the days of the Space Race.  It also has more to say than just these surface revelations though.  It shows that women were being hired by companies that were largely run by men at the time.  It shows that despite their success, the women were treated as secondary citizens in a couple ways.  What it really highlights though is that America was truly united in beating the Russians in the Space Race.  Once the cop finds out where the ladies work the fact that they are black women…well, it doesn’t matter.  The reasons they were stranded on the side of the road…it doesn’t matter.  The fact that they’re black…it does not matter.  Only one thing matters: getting them to work so they can help get our boys to the moon! 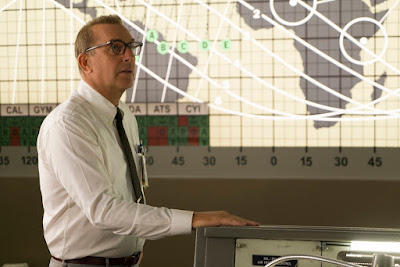 It’s such a perfect setup for what is to come, it’s a shame when the screenplay shows that it doesn’t trust the audience to understand this, forcing one of the characters to say “three negro women are chasing a white police officer down the highway in 1961…that is a God ordained miracle” to emphasize what just transpired.  I think most audiences would have gotten what was going on without it.  But otherwise the movie does go down this path and it goes down it as effectively as you can expect.  You have Dorothy Vaughan (Octavia Spencer) who is a manager (without the title or the pay that goes along with said job) for many of the colored women who look over the fact sheets in the basement.  You have Mary Jackson (Janelle Monae) who is an engineer who might already be one of more prominent ones NASA would have if they could just see beyond her gender and race. 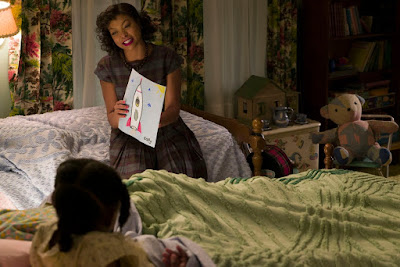 Finally, we have the heart of the movie in Katherine Goble (Taraji P. Henson), who is better than any mathematician in NASA.  She gets called up into the big room as “a computer,” which means she is supposed to verify numbers that are crunched by the male scientists.  She knows numbers better than anyone else though, which catches the attention of her boss Al Harrison (Kevin Costner), who gives her more responsibilities as he slowly begins to realize what a valuable asset he has.  He comes around to her more so than Paul Stafford (Jim Parsons), who is the head engineer who agrees with most of her findings, but is having a difficult time coming to the realization that she is a person worthy of respect.  There is very little use of the n word to be found in this movie, but him calling her a computer repeatedly stings all the more.  It signifies that she is a tool for the men to use, not an actual person, and that equal footing is (at the very least) a long way away. 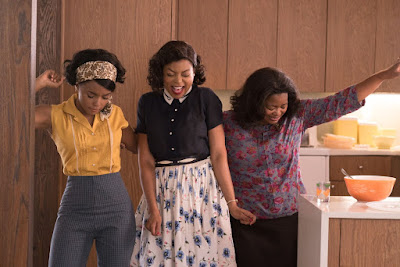 The strength of “Hidden Figures” is partially because this is an interesting story that to my knowledge wasn’t as well known to the common folk.  There were people who worked behind the scenes of NASA that helped get John Glenn into outer space that we have never heard of, and these are just some of them.  The other strength of the movie is that this is the type of movie I think we need at a very specific time.  We live in a day where people of different colors and genders want representation.  They want it so badly they are even willing to get angry about it.  Here is a movie that is based on a true story, has characters of different race and genders who are the heroes, and is presented in a way that is not angry or even that political.  It is what it is.  We may have heard this story late in the game, but I’m happy that we’ve finally heard it as opposed to never hearing about it.