The Morning After the Oscars 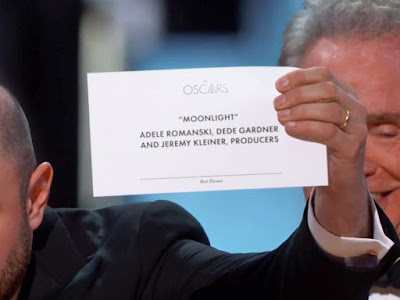 The morning after the Oscars there was no celebration.  There was no photo shoot of all the winners huddled together and showing off their new awards.  There were tears, as would be expected, but some were for the dreams they held in their hands only to have to give them up so suddenly.  For the people who had lost their dreams and just gained theirs, they did so with heavy hearts at the thought that their success came from another’s failure.  When Warren Beatty and Faye Dunaway walked onto the Oscars stage to present the award for Best Picture at the 89th Annual Academy Awards, I bet they had no idea they were about to partake in the shows biggest blunder of all time.  Beatty read the nominations, opened the envelope, and looked at it with confusion for a long time.  He showed it to co-presenter Dunaway who slightly shrugged and announced “La La Land” as the year’s Best Picture.
The producers of the hit musical happily walked on stage, collected their Oscars, and started giving their speeches, thanking family and friends for their support, before producer Fred Berger abruptly said “We lost, by the way.”  At that point fellow producer Jordon Horowitz took over the microphone to inform everyone that there had been a mistake: “Moonlight” had actually won Best Picture and the wrong name had been read.  He invited the real winners to come onstage to collect their awards, but there was still much confusion (despite his assurance that this was “no joke”).  Finally, he grabbed the winning envelope, held it up for everyone to see and shouted “’Moonlight’ – Best Picture.”  The crew for “Moonlight” walked onto the stage and collected the award that should have been theirs from the get go, but it was pretty clear the night was ruined.  As far as Best Picture was concerned, no one won and everyone had lost.
The crew of “La La Land” lost because they had their awards taken right out of their hands.  They showed real class through their annoyance, but they handled themselves the best way they possibly could have.  Horowtiz in particular was very gracious in setting out to correct the mistake that had been made.  He was upset and clearly frustrated, but he knew what had to be done, and he took it upon himself to try to right a wrong that he wasn’t even responsible for.  When Barry Jenkins walked up to the stage to give the acceptance speech there was a look of confusion and disappointment on his face.  Sure, he was happy to win the night’s highest honor…but to win it like this?  That was going to be a tough pill to swallow.  How do you even celebrate winning in such a way?  Do you go to the after party, drink cocktails, and brag about how you got to take the award right out of your competitor’s hands?
This wasn’t akin to a divorce; this was akin to coming home from work only to catch your wife leaving you for another man.  After the debacle, no one wanted to talk to everyone about how great it felt to win an award.  Who could after that?  No one could even bring themselves to appreciate that a movie about a young, gay, black man growing up in a drug infested city beat a lavish musical production.  No one discussed what a groundbreaking and important thing that is for an industry that all too often plays it safe (though I want to add that “La La Land” was groundbreaking in other ways).  While a “Moonlight” win was always going to be an upset, it may have been an upset in a positive way.  In the same way “Shakespeare In Love” winning over “Saving Private Ryan” felt good because comedies rarely win the top prize (much less beat movies about World War II), “Moonlight” beating “La La Land” was going to be seen as the important social film beating the glitz and glamor.
That is not how it’s going to play now though.  The typical post-Oscar coverage was largely eschewed in favor of talking about this major mistake that happened.  The stars praised each other in statements, but ultimately did not participate in any group photos or friendly congratulating.  What should have been the end of a long public relations tour has officially gone into overtime as everyone tries really hard to assure us there are no hard feelings and how much they just love the other person’s movie.  The Academy itself still has to do something to try and right the ship (if it can be righted at all).  Maybe one day this will blow over.  Maybe one day we’ll be able to sit back and appreciate the fact that “Moonlight” was able to win in the face of all odds.  Or, maybe, “Moonlight” will always be the bad guy.  The movie that literally took Best Picture right out of “La La Land’s” hands.  For the morning after the Oscars no one won, and there is a bitterness that is likely to last long into the weeks and months ahead.
Tweet