Animation has become such huge business, that it’s easy to forget it is capable of telling poetic stories through fluid visuals and deliberate pacing.  “The Red Turtle” is a movie with no dialog and a very simple setup, yet it tells a deep story of love, depression, and accepting the challenges life throws at you.  I watched the movie and took everything in not literally, but figuratively.  This is actually a dangerous thing to do with a movie because you can never really know what a director wants you to think about a movie, and to approach something in this manner suggests it might not be about anything in the first place.  This I understand.  I also understand that to take it literally would make this a movie about a man who falls in love and marries a supernatural sea creature.  That movie is also worth viewing, but I kind of like the way the abstract philosophies made me feel, so let’s go with that angle. 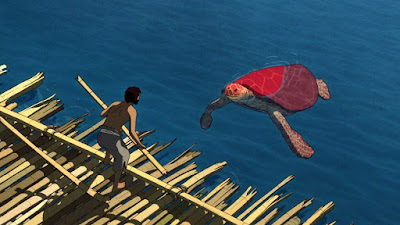 The story involves an unnamed man who has found himself on a deserted island in the middle of nowhere.  We have no idea what his life was like before he got to this point, but we can instantly relate to him because the idea of being pulled away from our own lives and getting stuck somewhere without anyone else to speak to is a horrible one.  The island itself doesn’t even offer much in the way of entertainment.  There are trees, sand, and lots of sand crabs who sort of become like pets who follow our silent protagonist around while they wait for him to drop food.  His attempts to escape the island are thwarted by a giant red turtle, who seems forceful in its attempt to keep him on the island.  He is understandably upset at being forced to stay on the island and hurts the turtle, only to find it later transforms into a beautiful red head woman. 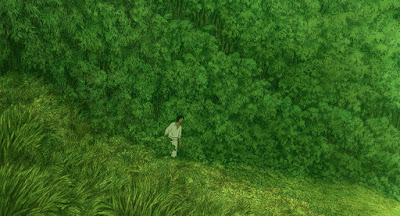 Now the situation has changed.  There is something on the island worth living for.  There is hope that life won’t be so bad.  The two begin a relationship, have a son, and build a home.  Now what appeared to be the worst thing that could happen to him has ended up becoming a big blessing.  This is about the time I started to think about the movie and how it was relating to my own life.  When people ask me why I love movies my response is “I learn about life through them.”  Movies like “The Red Turtle” perfectly illustrates why I have that philosophy in the first place.  My life has not been great recently.  It appeared to be moving forward to a bright future, only to be derailed in the most unexpected (and heartbreaking) way.  I will not lie: I feel like I’ve been stuck on an island of misery and loneliness for the past few months.  Feeling stranded in life is something we all must deal with, and I have been doing my fair share of that. 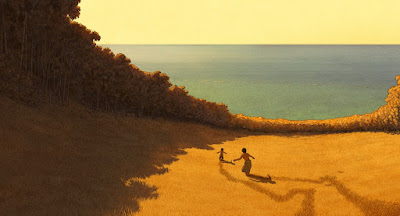 I don’t think I’m dealing with it well.  I’m still sad about how life has turned out and I feel like I’m on my own island.  What a movie like “The Red Turtle” reminds me of is that I’ve been on this island before.  I’ve been in that position where is seems like there is nowhere positive I can go in life, and then, through unexpected circumstances, things get better.  Through means I can’t possibly explain, life becomes worth living again.  Maybe one day I will be like the man in this movie, old and grey looking at the moon, and thinking to myself “yeah…my life was good, wasn’t it?!”  Maybe I will get to that point someday, and through this simple animated movie, that idea seems strangely possible once more.  The underlying message of “The Red Turtle” to me seems to be “life feels hopeless…until it isn’t.” 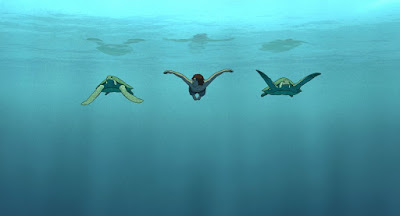 That might not sound very optimistic, but this is portrayed in a beautiful, sensitive way, that you can’t help but be moved by it.  The movie is a French production and directed by Academy Award-winning director Michaël Dudok de Wit, who has a long career in making short films and commercials.  His work must have impressed someone though, because for his first feature film he got the legendary Studio Ghibli to animate the movie for him (with Isao Takahata acting as a production consultant).  Fans of the studio might be put off by the different animation style and pacing, but otherwise it feels like a Ghibli film, as it still deals with issues of the human heart (a theme Ghibli has always done very well in my book). 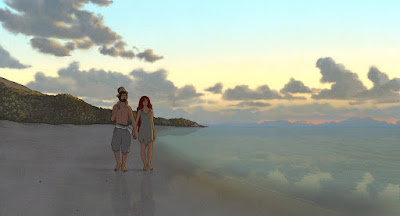 I realize I must have just spent a few paragraphs suggesting that your personal circumstance will affect how much you relate to “The Red Turtle.”  I don’t believe this is the case, as taken at face value it is a charming (if not strange) love story with some very poetic moments.  The obscurity of the details is what tells me this is something audiences are supposed to relate to their own lives though.  I believe the director (who is now 63) was probably looking at his own life.  It’s a life full of awards and acclaim, yet this is his first feature film.  It doesn’t strike me as one that is going to be a huge box office hit, so it could potentially be his only film.  He’s probably had thoughts of disappointment in his life, getting a little away from his own island only to be pulled back.  With “The Red Turtle” it appears he has learned to embrace his island, and the sooner I embrace my island maybe life will look a little more sunny.