Pixar has been around for 25 years.  So says the opening of the movie.  For the past 16 years they have been releasing great movies that have touched the hearts of children and the hearts of the child in their parent's hearts.  The original “Cars” was about a world inhabited by…well, cars.  It was a car world that was devoid of human life.  Even the bugs were made of miniature Volkswagen Beetles.  But the movie also touched about how people go to fast in life.  How if you slowed down and smelled the roses, you might possibly discover a life you enjoy, but have been passing by in favor of saving ten minutes from your road trip.  So after Pixar laid down the foundation from the first film what do we get from the sequel?

A world race, lots of explosions, and British sky cars.  All in 3D now.  Seems to be the exact opposite of what we were told in the first film doesn't it?  The story now revolves around race car Lightening McQueen (Owen Wilson) touring the world in Japan, Italy, and Europe, in a race that is supposed to prove that alternative fuel is more effective and pollutes less than fossil fuels (gee, and people thought “Happy Feet” was political).  His best friend Mater (Larry The Cable Guy) is now tagging along with him…though his red neck nature causes him to be more annoying than anything.

Seriously folks, if you're going to make a sequel there's obviously something to consider: Who was your break out character in the previous film.  For “Cars” it was Mater.  Now ask a second question: If that character is a supporting one, can you upgrade him to lead status and have that character carry the film?  I don't think Mater can do this, but he's the lead in this film.  Mainly because he's somehow mistaken as being an American spy agent by Finn McMissile (Michael Caine).  The other British spy is Holly (Emily Blunt) whose reaction to the idea of Mater being a spy is more in line with what most people would feel.  What follows is a visually stunning and colorful film, filled with lots of action, noise, and some (admittedly very funny) visual gags.

In fact, it's the visuals that are the best thing about the movie.  Having been to Tokyo myself I can personally attest that Japan is that colorful and nutty (though the roads in this movie are less crooked than in the real Tokyo, but I'm willing to overlook that for obvious reasons).  Pixar has long been the masters of great computer animation, and there's no reason to think they'd falter now.  What bothers me is the story: It's not only contradictory to the previous film, it's utterly pointless.  I know the last film sold a crap load of toys, but that's not a good reason to make a sequel.  Well…alright, if you're a director that's not a good reason.  If you're a stock holder then I guess you wouldn't be taking my review seriously anyway. 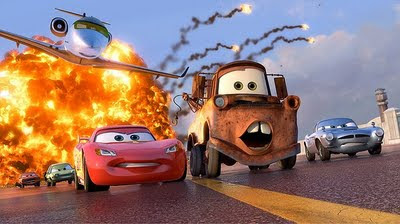 Look at DreamWorks “Kung Fu Panda 2” from earlier this year.  That movie builds upon the last movie with a more involving story, characters that were affected by the events in the last film, and action sequences that were improved upon.  In comparison “Cars 2” really only has better race sequences, as the story isn't involving and the characters aren't interesting.  Kids will likely enjoy this for some of the reasons I listed above and I guess its harmless entertainment, but that doesn't make it good.  There's not much to talk about this film beyond the parking lot, which makes it a failure in my opinion.  It's nice to see John Lasseter back in the director's chair, but the fact that he chose to direct this over “Toy Story 3” is a decision the man will have to live with for the rest of his life.