With “How To Train Your Dragon” and “Toy Story 3" I’d say that 2010 is shaping up to be another memorable year for animation. After these two highly acclaimed films comes another animated film from Sony Animation, a studio who makes films I like but usually don’t love. Their release is “Despicable Me,” a movie with a pretty clever premise of a supervillain named Gru (Steve Carell) who used to be a mastermind villain but is now threatened with the deadliest of enemies: Old age. To prove he’s still got it though he plans to steal the moon by shrinking it down to baseball. 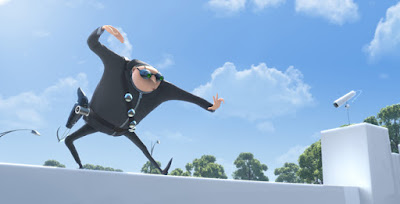 First though he needs a shrinking gun which is possessed by new supervillain Vector (Jason Segel), and the only people he’s opening his door for are girls selling cookies. This gives Gru a (as he says) “lightbulb” and adopts three sisters from an orphanage for the sole purpose of distracting Vector and stealing the gun. This works well enough but the later problem comes in now that he’s got the girls he needs to figure out what to do with them. Unlike most kids in animated these girls are neither annoying nor bratty. They are simply children who want a mom and dad to play with. Gru - to put it bluntly - is not what they had in mind. 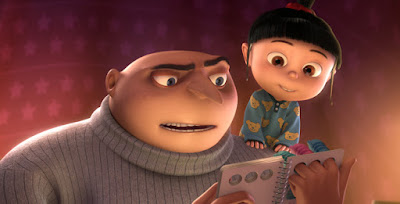 Their frustrations are easily relatable. Their situation is predictable though and the movie makes no real attempt to be anymore daring then the premise allows. Normally this would kill a film but “Despicable Me” has a very big draw to it despite it’s predictability: Gru is an original character. Neither overly evil or sweet, he steals our attention the second he walks onto the screen and is always an engaging protagonist. He’s evil but...eh, he’s evil in a likable way. He even employees lots of yellow miniature people...things. These yellow helpers are very funny sometimes and I think of them as modern day Oompa-Loompas (or something to that effect). 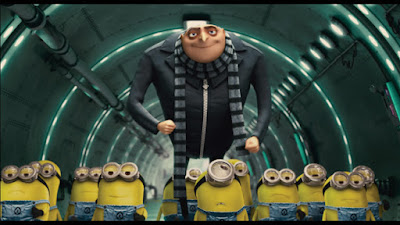 I also admit that there are a few action sequences that may not blow your socks off, but darn it, they sure are a lot of fun. During a better film year “Despicable Me” might have sort of slipped through my fingers. Touching though it can be I’ve seen much better. Sony has delivered another fun but hard to love film. Right now it sits in multiplexes with “Toy Story 3" across the hall, and it’s pretty obvious what most people are going to chose if given the choice. But you know what, after having to sit through “Twilight: Eclipse,” “The Last Airbender,” “Prince of Persia: The Sands of Time,” “Sex & The City 2,” and a whole other wad of crap, “Despicable Me” comes off as a nice little surprise that is easy to like and hard to hate.