Looking back at my review for the first Spider-Man movie I felt that the review lacked life, entertainment, and interest. I will not lie to you; I wasn't very motivated when I wrote that review, and somewhere deep down inside I was wishing I didn't have to write that review at all. Why you ask? Because the first Spider-Man movie has been reviewed and praised to death by so many people that I felt that there was nothing new for me to say about it. So I took the easy way out and gave the movie a VERY basic review. However now we have "Spider-Man 2" in the theaters now, and "Spider-Man 2" surpasses the first movie in so many ways then one, that I now feel motivated to write an interesting review for the movie. The story in this movie takes place two years after the events of the first film, and life for Peter Parker is not going as well as he'd like it to. He's lost countless jobs from being late, his grades are slipping at college, his science teacher Dr. Conners has just warned Peter that he's this close to flunking his class, and his gig as Spider-Man has kept him out of contact with his best friends Harry Osborn and Mary Jane Watson. We find out that Mary Jane has been making a living from being a model for various billboards while she also stars in a hit stage play where she plays the lead character. 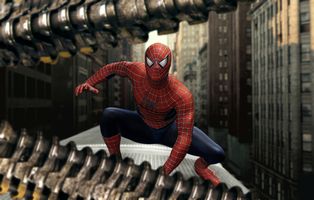 Meanwhile Harry has taken over his dad's old position as president of Oscorp, and he is currently funding a project by a man named Dr. Otto Octavious that is promising to make Oscorp millions of dollars. Oh yeah, and Harry still believes that Spider-Man killed his father and wants him dead. Nice to know some things never change huh? Also Peter's Aunt May is worried about him and his obsession with taking pictures of Spider-Man, as she thinks it's unhealthy to be obsessed with someone like Spider-Man (trust me lady, you have NO idea). So yeah, Peter's life is a living hell at the moment, but hey, what are you going to do right? After all, "with great power comes great responsibility" right? Well, the more Peter realizes how much he is missing in life because of his duties as Spider-Man, the more he starts to resent his powers and wishes for a life of his own again. Ironically enough, once he starts to wonder what a life without Spider-Man would be like he slowly but surely begins to lose his powers! First his web stops working, then he has trouble climbing on walls, and he becomes near sighted again (which means that Peter has to wear those silly looking glasses again). Deciding that since he is sick of being Spider-Man anyway, Peter takes this perfect opportunity to throw away the costume and live his own life once again. 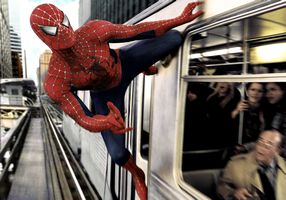 For awhile this works out well for Peter, until a new villain known as Dr. Octopus (or as some call him Doc Oc) captures Mary Jane, and tells Peter to go find Spider-Man for him or he will peel the flesh off of her! This is really all I can tell you about the film without giving everything away, but lets just say that the story is FAR more complicated an interesting then the summary I just gave you is! Judging from the previews of this movie you may be expecting a good solid action flick, and in one way the film delivers on that promise, but the real reason to see this movie is for the character and story development. The characters--as good as they were in the first film--go through new revelations, growth, and changes that you would never expect them to go through based off the previews alone. Peter's conflict with whether or not he wants to continue to be Spider-Man or not is the real focus of the film, but also worthy of mention is Mary Jane's growth as a character. In the first movie Mary Jane was little more then a girl for Peter to fall in love with and a girl for Spider-Man to save every 20 minutes (trust me on that last comment, I timed the movie, and she really does get saved about every 20 minutes). 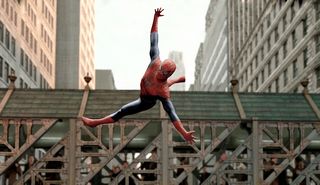 However in this movie Mary Jane is a woman who has real feelings, real problems, and a real life. She is currently engaged to the son of the head boss over at The Daily Bugle (and Peter's boss), but you get the feeling that she's chosen to marry him not because she loves him with all her heart (she loves him, but probably not in that sort of way), but because the one she truly loves keeps rejecting her, and she's sick of it. In fact I am going to say that all the women that are going to see this movie because of their boyfriends are dragging them along to see the movie with them are going to be pleasantly surprised to find someone in the movie that they can identify with, and also care for. Women will also be happy to know that the romance in this movie is not simply tacked on, but has had some real thought put into developing it, so the love story feels genuine instead of feeling cheap (like most love stories in superhero movies feel *cough*"The Punisher"*cough*). Another interesting sub-story is the story of Harry's obsession with Spider-Man, and how that obsession is not only coming in-between him and Peter's friendship, but is slowly driving him insane, and as we all watch we know that if Harry isn't careful, he will eventually follow in his fathers footsteps and completely lose his mind. 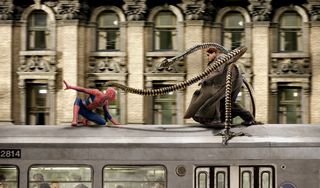 Even the special effects are better this time around. One of the few major problems with the first Spider-Man movie was that there were too many times when the CGI Spider-Man looked more like a video game character then a real life person, and that the CGI and live-action didn't always merge successfully enough for the effect to be seem less. Well that problem is gone here. When I heard that the film makers spent $210 million dollars making this movie I was wondering what the heck could they possibly have spent the money on. After all, that's almost the entire budget of all three of the "Lord of The Rings" movies, and those movies cost $300 million to make all three of them! Looking at "Spider-Man 2" I'm guessing a good chunk of change went to paying the actors for their work in the movie, however there was also a considerable amount of money spent on the special effects, to make them look as good and seem less as they possibly could. While watching the movie I honestly couldn't tell when the Spider-Man I was watching was a CGI character or a real life person. Really, I couldn't separate the two without knowing ahead of time which scene's had the CGI character and which scene's didn't, the special effects are THAT good! 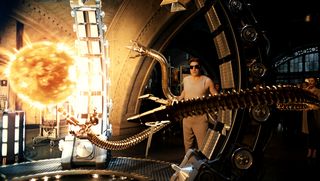 Another part of the special effects I loved were Doc Oc's mechanical arms. It would have been easy for the film makers to just slap on the mechanical arms as nothing more then a prop that they needed for the character, but the film makers take it a step further by giving those arms life. They think, they react, they have life, and the arms are just so much fun to watch as you don't know what they are going to do next. I can't even explain what makes them so good, but trust me when I say that you'll absolutely LOVE those arms when you see them! Danny Elfman's score for "Spider-Man 2" this time around is also much better. The score for the first movie was a good but ultimately forgettable piece of work, however the score in this movie (like the story and the CGI) has much more life, emotion, and oomph to it. I didn't buy the score for the first movie, however I will be buying the score for this one. "Spider-Man 2" is ultimately the best superhero movie ever made, one of the best movies of the year, and I honestly believe that this movie is good enough that it might be nominated for an Oscar for "Best Picture of The Year!" It's THAT good! 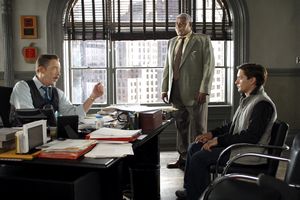 "Spider-Man 2" is a movie that everyone regardless of age, gender, and personal taste can enjoy! Not since "Superman: The Movie" was released has the bar been raised so high for the superhero genre! While the movie may be too scary for kids under the age of 12 (unlike the first film, I believe this film earns its PG-13 rating) everyone else owes it to themselves to see not only this superhero classic, but this movie classic! There is only one downside to this movie being so good, and that downside is that there is NO WAY "Spider-Man 3" will be any better! But we need not worry about that until 2006. In the meantime go see this movie, whether you liked the first one or not, as this is one of the best films of the year, and it may even be one of the best movies of all time!