Romantic comedies don’t have to be terrible.  I know there is a huge population of the world that consists of manly men who would never willingly go to one of these things if their life depended on it.  They feel the movies are beneath them.  That that they aim for the lowest form of comedy that will be inoffensive and easily digested by fawning women who like to hold handkerchiefs and go “aww” every chance they get.  I understand this.  I understand the dilemma.  In their defense, most of these movies don’t make any attempt to better themselves.  They don’t trust their target audience to show up for anything that isn’t easy to digest, and so romantic comedies tend to not stretch their wings or do anything truly funny if they can get away with doing less.  Yet Judd Apatow makes these very movies that men usually avoid, but manages to draw in that very crowd. 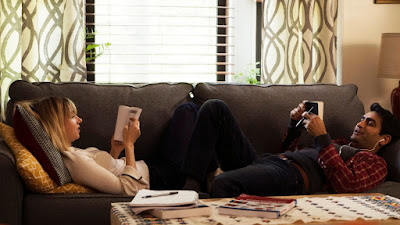 While he doesn’t direct “The Big Sick” himself (Michael Showalter is in the director’s chair), he saw this screenplay written by the film’s star Kumail Nanjiani, saw how smart it was, and made a deal with Amazon Studios to bring it to cinemas.  As I watched it, it dawned on me one of the reasons the movie works is because it’s the kind of movie you can go see with your parents.  The screenplay seems autobiographical in nature, as Kumail plays a character that bears his name, who is a struggling comedian trying to make his name in a very competitive business.  When he isn’t telling jokes, he’s driving for Uber on the side, and going to family dinners where his Pakistan mother springs potential brides on him.  It is a dilemma for him as he was raised in America, with America values, yet his family wants him to retain the Pakistan culture that they were so eager to get away from so many years ago. 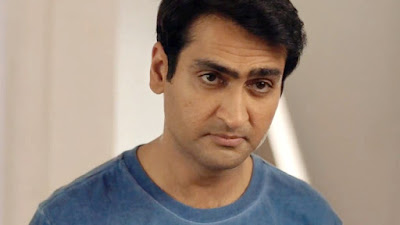 This is a storyline that rings true for many immigrants today and remains a huge culture problem.  This ends up being a bigger problem when he meets Emily (Zoe Kazen) at one of his shows and starts a serious relationship with her.  A relationship he must keep secret from his parents.  When she does find out about the potential wives his mother puts in front of him, she understandably breaks up with him, but when she finds herself sick and in need to be put in a medically induced coma, there’s only one person around who can do this.  This is where the movie changes gears and really becomes about Kumail’s relationship with Emily’s parents: Terry (Ray Romano) and Beth (Holly Hunter), who come to the aid of their sick daughter but have no one to stay with.  So – even though the two aren’t dating – Kumail is the only person who knows anyone, which makes him the person the parents are going to lean on for support and information. 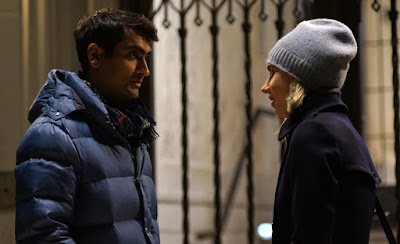 So, while this is a romantic comedy, it is really about the relationship between the ex-boyfriend and the parents of his ex-girlfriend.  That probably makes the movie sound a little kinkier than it actually is.  The film is very sweet and mature for a genre that usually plays things safe.  It is true that the target audience appears to be the crowd who is going on dates, but what is nice is that couples can go on a double date with their parents and have everyone find some common ground.  I know that sounds like a terrible suggestion, as the last thing most people want to do is hold hands with their girlfriend while her parents are sitting right next to them.  But the truth of the matter is relationships with elderly couple’s matter.  You can learn a lot from their experiences and understand your significant other more by knowing them.  Kumail himself seems to be surprised how much more he understands about the girl he loves just by knowing her parents, and just how much perspective he gains by talking to them. 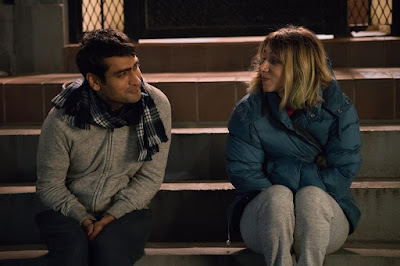 His scenes with Terry offer some of the movies best, as not only does he get to understand how an American father see’s his child, but Ray Romano gives one of his best performances as a class act father who has some dirty laundry of his own he’s been hiding.  I was never a fan of “Everybody Love Raymond,” but I personally loved Terry.  I’m hoping (maybe in vein) that word-of-mouth will carry “The Big Sick” to box office success so a message can be sent to Hollywood that people will see romantic comedies if they aim a little higher and are a little smarter.  Chances are, video on demand is where the future is really going to be for this movie.  Which, let’s be honest, probably isn’t that bad, since most elderly couples are watching more of their movies at home and opting to skip the theater altogether.  Yep, this is the perfect movie for them.