Early on in “American Hustle” two of the main characters discuss a pickle they have found themselves. They are con artists and have been very good at what they do for many years, but a surprise FBI raid has caught them by surprise. Now they are being forced to do a hustle for the American government to catch some dirty politicians in acts of bribery. They don't seem to have much of a choice, but the one named Sydnie (Amy Adams, whose character might also be named Edith) tells her boyfriend Irving (Christian Bale) that she's going to do some hustling herself. She tells him she will seduce the FBI agent who caught them (Agent Richard, played by Bradley Cooper) and will use him to their advantage to come out on top. She warns Irving though that she will be “very, very convincing” in her seduction. 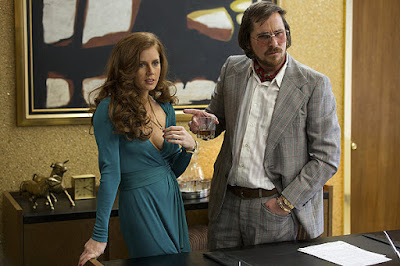 This would normally be suicide for a film to establish this up front, because where's the discovery if the rest of the movie is laid out? Thankfully director David O. Russell is one of the best directors working in Hollywood today. He knows how to spell out a story for the audience and still make it exciting and enticing for viewers. As we watch the film we think we know what's coming, but soon things get to be complicated. It's obvious that Irving has some trust issues with Sydnie/Edith, so he sets up a hustle himself. Agent Richard is also hustling these two characters to try and advance his career, and it's uncertain whether that will eventually include throwing these people under the bus. The wild card in all this could be Irving's sexy wife Rosalyn (Jennifer Lawrence). 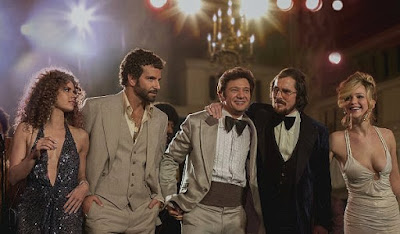 She is vein and reckless, yet there are hints that she might not be as naïve about everything that's going on around her. There are so many different plans that it sometimes gets confusing trying to figure out who's hustling who. Yet the direction and screenplay makes this interesting as opposed to frustrating. Instead of feeling like we're being jerked around by a stuck up director, we feel like we're involved in a complicated mystery of sorts. We know that there is a destination this film will come to, but which destination will it be? And do we even have an idea of how it will end anyway? It's pretty hard to figure out where this film is going midway into the film, and that makes the whole thing all the more intriguing. The fact that this is an interesting movie would be a recommendation enough, but the film is elevated thanks to wonderful performances by the main cast. 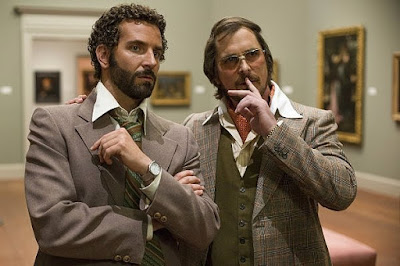 Bale, Adams, and Cooper are perfect in their roles, and Lawrence is a breath of fresh air as she steels every scene she's in. If she wasn't already a star this film would have made her one. I want to go on the record that I don't feel “American Hustle” is an instant American classic. Being about the twists and turns it is, chances are it will lose some of its luster come multiple viewings. Not that that stops this from being a very funny, very original heist movie (of sorts) with actors at the top of their game, a screenplay that is close to perfect at times, and a director who has an artist's grip on the entire process. This makes “American Hustle” a film that I suspect will become a personal favorite for many people, as it's one that is too much fun there's no way to not recommend this film to someone else.