When I was younger my family would make yearly trips to Disneyland. Before we'd get thee though we'd stay the night with Uncle Thomas and Aunt Janet. They weren't family by blood, they were just honorary members of the family. They were an old couple who were so much in love with each other that even a young anti-social brat like me couldn't help but wonder if there was ever a time when the two weren't part of each other's lives. They eventually died of old age, and the first end of the era had passed for me. Watching Michael Haneke's “Amour” brought me back to those visits. I know box office is driven by teen romances, but it's still the movies about the couples who are old and grey that make me smile the most. 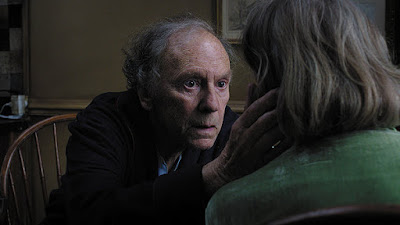 “Amour” is both a touching love story as well as a heartbreaking one. The George (Jean-Louis Trintignant) and Anne (Emmanuelle Riva) are in their eighties and happily married to one another. The movie doesn't state how long they've been married, but they are so comfortable with each other, so friendly, still telling corny joke about each other, that I couldn't imagine a time of their lives when they weren't together. Tragedy strikes when Anne suffers a stroke, and now has to be taken care of by George. Of course he loves her and wants to take care of her. On the other side is Anne, who knows this is the first step towards death. She loves him so much that she would rather die than let him waste his life away taking care of her. But if she's not part of his life, then what point is there to life for him? 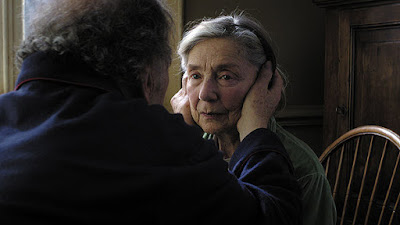 If this were a hopeful film the Anne would start recovering or these two people would rediscover their love for one another. “Amour” translates to “love,” so film takes neither of the directions because there's no reason to. We know they're in love because we can feel it. But what happens when an unwinnable situation comes between a couple? In this film the couple's lives become monotonous. The sicker she gets the more life becomes unbearable. They never leave the house. We are stuck watching these two take a long just to do something simple as making sure she can use the bathroom. The film's central question is how to manage the suffering of someone you love? 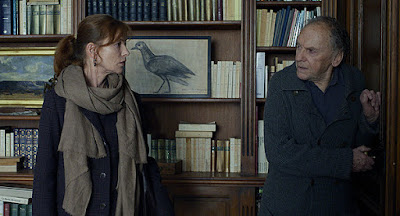 Although this is what most of us agree to with our wedding vows, it still comes off as cruel punishment. George starts to feel isolated, depressed, and lonely. Haneke directs “Amour” with long shots and pillow shots. You can watch every action movie with lots of violence in the past two years, and you couldn't find a single building blowing up that could match the feeling of loss you get just by watching these two sit quietly in their bed room, with so much they want to say but have no words to speak. Like Terrence Malick's “The Tree of Life” from a few years ago this is a movie that doesn't spoon feed the emotions to the audience with lots of words and over exposition. 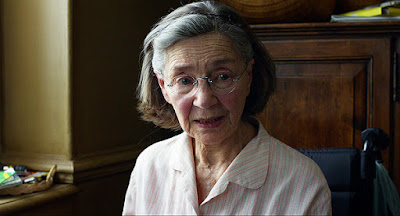 Like Malick, Haneke films his movie and lets the images speak for themselves. That means “Amour” will probably have a barrier between itself traditional movie goers who can't reach inside themselves and feel with their heart. Their loss. On a final note I want to tell you another story. My parents are getting old. My dad is 56 years old and my mom is 51 years young. There may be a day when something happens to one of them that will make the other have to manage them. I have no doubt that whoever falls ill first the other will take care of them. It won't be out of a sense of duty though, it will because they love each other very much. “Amour” is at once a happy story and a tragic story, but most of all it's a very human story.