I’m having a tough time imagining that it has been more than ten years since the Oscar-winning documentary “An Inconvenient Truth” was released.  Even Al Gore seems perplexed at how much time has flown.  His wakeup call is that a stranger told him that if he dyed his hair black, he would look more like Al Gore.  My wakeup call is that I am watching “An Inconvenient Sequel: Truth to Power” and find that much of the same information has been repeated.  For me, most of these facts weren’t new, but simply recycled.  What justifies the movies existence (for me anyway) is that this is a more hopeful film than the previous one.  Really, it is.  With “An Inconvenient Truth” Al Gore was giving a slideshow presentation speaking doom and gloom to the world.  He was pointing out the melting ice caps, the sudden hurricanes, and talking about political power that was determined to keep things this way. 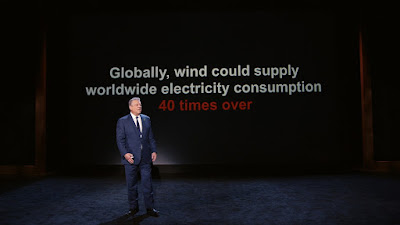 With “An Inconvenient Sequel: Power to Truth” many people seem to be aboard with the belief that global warming is a reality.  I don’t believe everyone is on board with the notion that it is manmade (Lord knows I’m not), but they are at least in agreement that it is happening.  As an old saying goes, “knowing is half the battle.”  The rest of the battle involves putting more money into wind, solar, and other forms of renewable energy.  Ten years ago, this was an expensive proposition.  Gore has good news though: These forms of energy are getting cheaper by the day, and innovative ways are being found to store it.  For that matter, when India points out they need to continue to use coal and gas power for the good of their country, Gore calls up his buddy Lyndon Rive (the CEO of SolarCity) to donate solar panels to the struggling country to prevent them from opening 141 new gas plants. 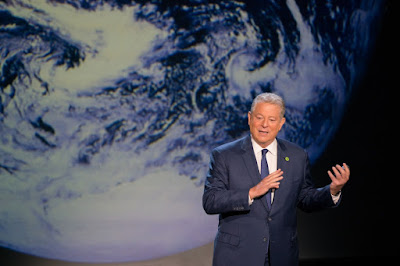 The fact that Rive stood to lose a lot of money from this proposal but agrees to it anyway shows where his heart is at.  Also, many other countries (including the United States) come together to form the Paris Climate Accord, which is a huge victory.  The movie was finished late last year, but after Donald Trump won the presidency the film was edited to make him a looming antagonist (who played into that by having the US withdrawal from the PCA).  I find this form of editing to be a little underhanded (as Trump was not the only person at the White House to express doubts about the Accord), but I suppose every good film needs a villain, so it might as well be him.  This little roadblock aside, very few people in the movie are in disagreement with Gore this time around.  There are even prominent Republicans who gladly shake his hands and are in favor of cutting back on gas products. 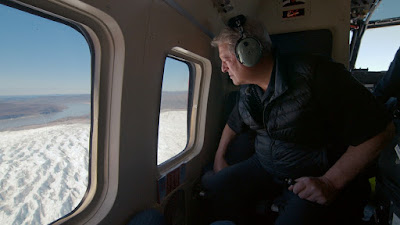 I have a confession to make myself: I’m an environmentalist.  Maybe not an extreme one.  I’ve read various research on this topic in the past ten years, and I’ve come to the conclusion that humans are not causing the kind of warming Gore claims we are.  I am for renewable energy though because it is better.  I am concerned about smog in the air, and now that it’s cheaper than oil I don’t understand why there is as much resistance to it as there is.  Also, I do have to point out that Gore is no saint here.  His excessive use of power in his personal homes is well documented and there is pretty much no reason for him to be sharing his warning through Power Point presentations anymore.  He says it’s the only way he knows how to spread his message.  Ten years ago, I could understand that.  In an age of social media, YouTube, Twitter, Facebook, and so much more, to still believe there is no other way to spread your word is madness. 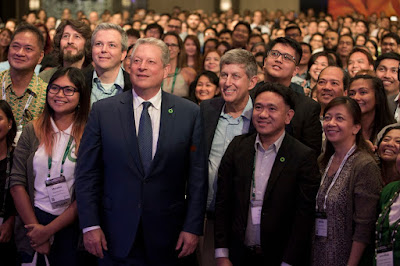 Maybe even delusional.  I think Gore still does his presentation because of all the speaking fees he gets to collect.  It’s sort of sad to watch him give his speech at private companies and universities where much of his audience already agrees with him.  In my eyes, that’s simply preaching to the choir.  For that matter, I suspect many of the people seeing this movie will already be believers in manmade global warming, and those who are still unconvinced all these years later will save their money and see “The Dark Tower” instead.  I know that it is tempting to put “An Inconvenient Sequel: Power to Truth” in theaters based on how financially successful the first film was.  But if the message is so dire and time is running so short, I think giving it away free on the internet is a much more responsible thing to do.  This is, after all, a moral issue, and to financially profit from it would therefore be immoral.  Right, Mr. Gore?