Is the world finally over the controversy that was brought up over “The Da Vinci Code” yet? I swear, for such a lousy movie it caused a lot more protests then I would have expected. Maybe those protests helped and maybe they didn’t, but “The Da Vinci Code” went on to become one of the years highest grossing films two years back, and now Tom Hanks and Ron Howard are back for another go. This time they are tackling “Angels & Demons,” which in book form was the prequel to ‘Da Vinci’ but in movie form is a sequel. They even reference the previous film a number of times to make sure you understand this. But don’t worry: This is the movie that’s NOT controversial! It includes a war between faith and science, a pope gets murdered, Robert Langdon admits he has no faith, and there’s a bomb that will kill thousands. 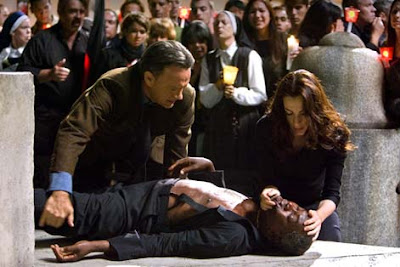 But hey, at least the story isn’t about Jesus getting married this time around, right? Anyway, so the story revolves once more around Robert Langdon (Tom Hanks), who wants access to the Vatican Archives so he can finish a book he’s writing on art in their culture. Due to his recent tirades though the Vatican is not willing to let him into the archives...that is until an old enemy resurfaces and threatens to blow up the Vatican City. The pope has just been murdered and a bomb containing anti-matter will destroy the city by midnight (before the priests decide on a new Pope I’m assuming). The enemy is the Illuminati, and only an archaeologist can solve the carefully coded clue they have left behind. The Vatican does not want to work with Langdon, but he does receive an ally in Camerlengo Patrick McKenna (Ewan McGregor). 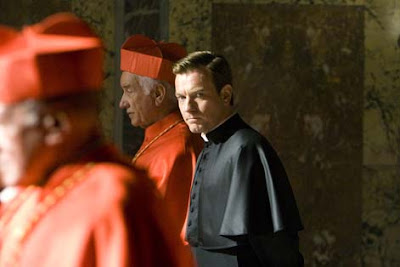 While the Camerlengo is dubious of Langdons faith, he trusts his intellect completely, and will do anything to save the church from itself. And then...car chases, code breaking, and a life threatening scene all follow. Yeah folks, it follows the same formula as “The Da Vinci Code” except this time around the movie is actually entertaining. I don’t know if that means it’s good though. Certainly the movie breezes through it’s two and a half hour running time, but I can’t say there’s anything truly memorable happening during any of it. It sort of just manages to get by on not being boring. The bad guys are threatening, Langdon is likable, there are at least two points in the movie where faith and science are discussed honestly (though for more in-depth discussions you may want to read the book), and it’s overall a fun ride. 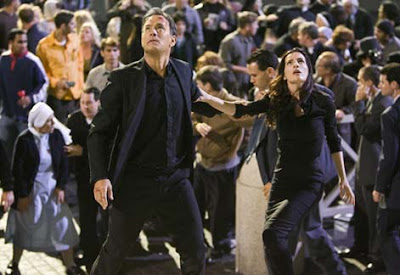 Yet the movie, as a whole, doesn’t amount to a hill of beans. It won’t challenge anything you think or feel about life, the characters may be likable but they are disposable, and action fans will likely find more to turn them on in “Terminator Salvation” or “Star Trek.” Ultimately though it wasn’t boring, it was entertaining, and it was even fun to a certain degree. So by those marks I have to give it a passing grade, but whether you take that as a solid recommendation I’ll leave for you to decide.