For me, “Anna Karenina” is one of the greatest books of all time. Many people would agree with me. In fact, Time Magazine went so far as to call Leo Tolstoy's Russian epic as nothing less than the greatest novel of all time. I'd agree with that, but then one of my Harry Potter books would have to be demoted, and I'm too sentimental to let that happen. These days there have been tons of movie adaptations of the book while people force…no, encourage kids to read it in high school. Now we are getting a new adaptation of the book for film with director Joe Wright at the helm, who made great films from Jane Austin and Ewan McEwan books (“Pride & Prejudice” and “Atonement,” respectfully), so why not Tolstoy? 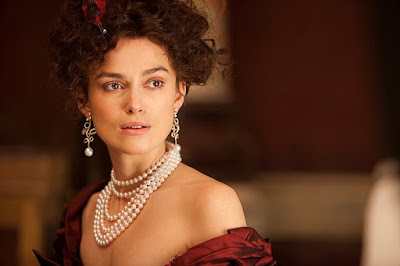 The thing is Wright manages to make his adaptation very bizarre. Or should I say interesting? I suppose some people would say experimental. You'll pretty much understand why the term is so confusing upon the first few minutes of the film, where curtains on a stage rise and our story begins. Rather than make this a costume period piece drama, Wright has opted instead to film “Anna Karenina” like a theatrical production. There is little to no attempt to create the illusion that this is a stage production. Since it is a movie the acting is more subtle then you would normally get with a stage production. This actually presented a surreal motion picture experience for me. 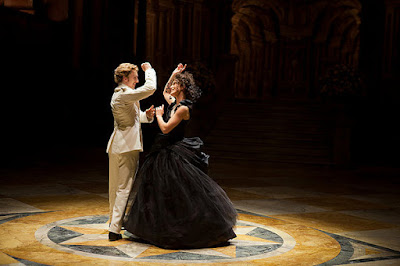 See, I saw this movie in a classic theater that had one screen and tons of seats. There were even tiers in this theater. To say that my surroundings matched with the stage feeling on the screen made the film feel eerie and exciting at the same time. It almost felt like I WAS watching a stage play come to life, and the results were much better than I expected! Granted, I know lots of people won't feel this way. They'll see obvious sets and decorations and wonder why the surroundings don't obviously look like they're computer generated backgrounds. 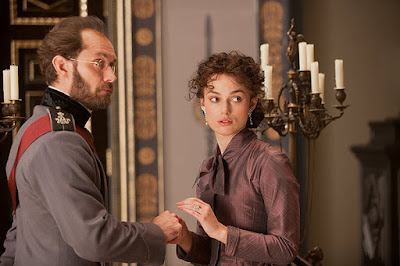 This goes back to the dilemma I find in modern films where the more real computer graphics make things look, the more fake they feel. Here everything looks fake, but feels real. I can't explain why that is…it just is. By now I've spent the whole time discussing the setting of the film rather than the story. That's because the story is about as good as we've seen it been in other film adaptations, but not substantially so. It helps that it has established actors like Jude Law and Keira Knightly (as the title character) in the film, but I don't think they do a substantially better job in these roles then other actors would have been. Joe Wright's “Anna Karenina” is more of an experiment then it is a movie, and it's up to you to decide if it works or not.