"As Good as it Gets" Review


There seems to be two groups of movie lovers in the world: Those that believe that golden age of Hollywood has passed us and those who believe that it never existed in the first place. The first group believes that the golden age of Hollywood was in the era of the 30's, 40's, and 50's, where dialog was elegant and the passion of love was written at the dinner table, not the bedroom. The second believes the golden age of Hollywood was nothing more then movies with pandering, syrupy dialog. They prefer the much edgier era that took place during the 60's and beyond, an era that gave us films like “The Graduate,” “Midnight Cowboy,” and “Star Wars,” movies that told their stories with rebellious glee, challenging the old time movies that dared to be written fake. These people believe in realism, not fantasy. 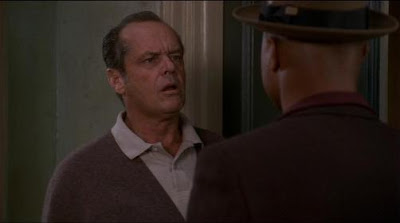 Then a movie like “As Good As It Gets” comes along and bridges the gap between these two groups so effortlessly you can’t help but feel it was made by a film maker with so much talent, he was either wise beyond all reason or an evil genius. Take the now famous scene where Jack Nicholson and Helen Hunt are eating dinner and Nicholson makes a particularly rude comment to Hunt. Hunt is about to storm out of the restaurant after being humiliated, and demands Nicholson pay her a compliment. The people in the second group are happy because this is real. People who go on dates almost never make it a perfect night, usually screwing it up, and so the movie connects with them. Then Nicholson gives Hunt a carefully told story of his life and how she’s affected it, telling it so beautifully it brings you back to the days when passion was at the dinner table, and finishes off by telling Hunt “you make me want to be a better man.” 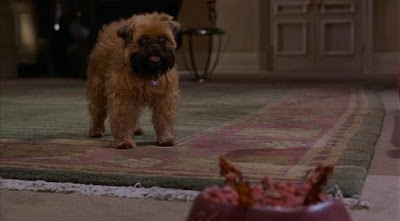 Hunt sits there for a long time as we study the shock on her face, before she finally beams as she responds “that may just be the best compliment I’ve ever received.” This scene above all others is a great example of how “As Good As It Gets” somehow manages to bridge the gap between group one and two. On one hand the movie revolves around Melvin Udall (Nicholson in a rare comedy Oscar winning role), a writer with anxiety disorder that manages to offend just about everyone he meets, especially his gay neighbor Simon (Greg Kinnear) and his partner Frank (Cuba Gooding Jr.). Despite his general distaste for people in general, Melvin has warmed up to Carol the waitress (Hunt in another Oscar winning role), though Carol general dislikes having to put up with Melvin at the restaurant. 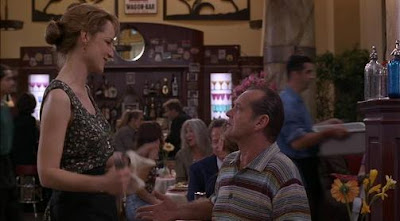 So far you cans see why people in group two would love this movie; this is a classic example of the rebellious movie, where characters don’t follow rules of the old days, and are as flawed as the viewers are. In some cases the viewers may find themselves more stable then the characters depicted on the screen. Yet the movie is balanced out with smart dialog that is sharp and witty, but also profound and moving. There is not a single wasted line in this movie, no scene that feels pointless. It’s all a very effortless project, one that has you laughing and thinking at the same time. I must stress that the movie can be very offensive if walked into with the wrong frame of mind. Melvin may be one of the more memorable characters Nicholson has ever created, yet he’s also one that offends just as much as he entertains. 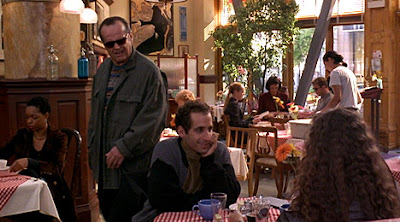 On the flip side you have Carol, who is played with raw emotion by Hunt, a woman who spends so much time working and caring for her sick kid she feels like life is flying by without her. Rounding this all out is Simon, who is living the lavish lifestyle of a successful artist until an apartment robbery leaves Simon with a scarred face and dept, causing him to fall into a sever depression. Though Kinnear was nominated for an Oscar in a supporting role, his character is no less important then that of Nicholsons and Hunts characters. 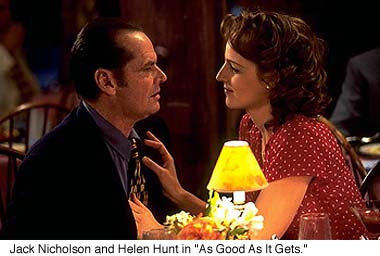 The movie was written and directed by James L. Brooks, who also directed the Oscar winning “Terms of Endearment” and Oscar nominated “Broadcast News.” He also has produced “The Simpsons” for the past twenty years, and while his movies are few and far between, he shows that less is more sometimes. Though his films don’t come packaged with big budgets or special effects, his films are events unto themselves. They revel a knowledge of people and life that is missing from most movies, and as mentioned above they contain enough Hollywood moments for fans of classic films and characters who are rebellious for people who prefer more bite in their films. “As Good As It Gets” is one of the best romances you are ever going to see. It’s also one of the funniest.