Though it’s taken twelve years to get made, James Cameron’s “Avatar” is without question the best film of the year and the best film in many years. Though there are great directors working in the business, few of them have the vision, scope, and daring to make a movie like “Avatar.” Watching the movie I wondered if this was what it felt like to discover “Star Wars” in the theater for the first time. The movie revolves around Jake Sully (Sam Worthington), an ex-Marine who lost the use of his legs in combat. He enters a special program that his twin brother was working on before he died. That program is the Avatar program. The purpose of the program is to create these things called Avatars. They are scientifically created bodies of the local species on the planet Pandora. 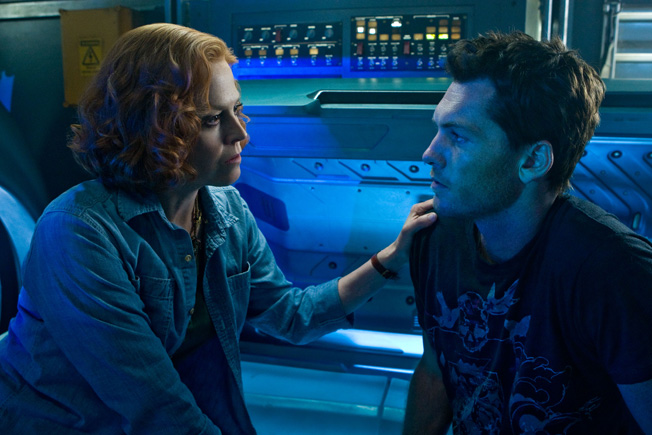 The natives on the planet are called Na’vi, and they turn out to be a bunch of blue tree huggers who simply want to live in peace with the planet god. Though Jake is supposed to be working with Dr. Grace Augustine (Sigourney Weaver) in helping convince the Na’vi to move, he is secretly taking orders from Colonel Miles Quaritch (Stephen Lang), who seems to have nothing better on his mind then to blow the Na’vi off the face of the planet. This is all well and good until Jake (now in Avatar form) is taken under the wing of Neytiri (Zoe Saldaña), the princess of the tribal leader. It’s her job to teach Jake their tribes ways so that he may eventually become a member of their tribe. In many ways this is what “Dances With Wolves” would have been if it were made into a science fiction movie. Like that movie this movie is filled with marvelous landscapes and worlds. I was very impressed with what Cameron has managed to create. Most of the time directors will alter landscapes to create something that looks new, but Pandora IS a new world! One that is colorful, beautiful, and peaceful. Rarely are as frustrated with environment killers as you are in this movie. The movie is also a great love story. The lost between Jake and Neytiri is so human and tender that it has to be seen to be believed. When Neytiri discovers Jake as a human for the first time, the simple touch of her hand to his face is so tender and beautiful it brought tears to my eyes. 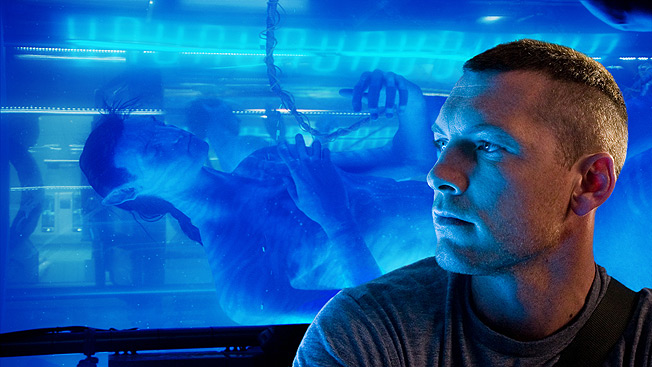 If the movie falls I suppose it should be noted that the antagonist is far from interesting. Being nothing more then a gun-touting general, I found nothing terribly offensive about the character, but for a movie with such originality and creativeness it’s a shame the bad guy has to be there simply to be bad. That said, since he is pure evil that makes the climax all the more exciting, so maybe I’m overanalyzing this to an extent. Ah, but a somewhat less-than-spectacular villain doesn’t cripple this film or even really hurt it. The bottom line is that James Cameron has created a wonderful thing here. A “Star Wars” for the new millennium. A thing of beauty. An instant classic. 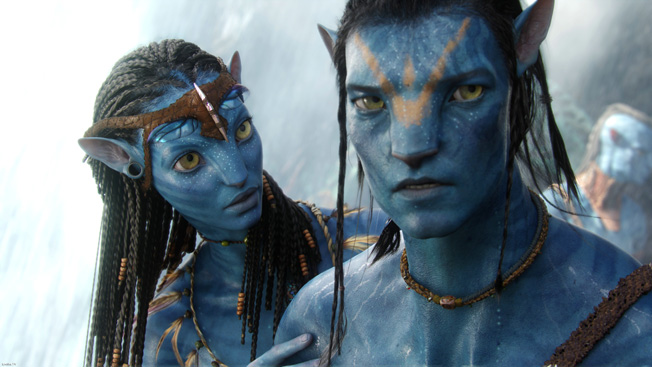 A movie that can be watched by anyone and everyone, and it will have something in it for them. Throughout the movie all I could see was twelve years of love and labor going into something that was going to be loved for generations. The fact that there is a toy line out there should not delusion you into thinking this is another action film designed to sell toys. While it may very well sell toys, this is an original experience. One that we rarely get these days, and one that we really should get more often. If it takes Cameron another twelve years to make a movie I remain unconcerned. Because at this point I think he’s proven himself a master of film making, and besides, as the old saying goes there’s no rushing great art. “Avatar” is living proof of that statement.

Update:  If any review deserves an update...this is not one of them.  Really, it doesn't.  While I may have been a little over-enthusiastic in the above print critique, I don't take my opinion back.  I still believe it deserved five stars.  I still consider it the best film of the year.  Out of all the movies I've ever reviewed, I've never had to defend my recommendation of a movie so much.  The main reason, I believe, this is the case, is because "Avatar" is certainly a theater experience movie.  It was filmed in 3D and is intended to be viewed as such.  Seeing it on a giant screen is a must as well.  An audience certainly helps.  In the proper setting with proper equipment, "Avatar" still has a magic that only the best of movies can conjure.

Alright, so I do take a few things about the movie being well written back (it really isn't), but when combined with the great visuals, acting, and pacing, the writing is good enough to do the job.  The problem is "Avatar" wasn't going to be playing in IMAX 3D theaters forever.  It had a shelf life.  Eventually, it would stop being viewed and have to come home.  This is where the problem is.  While people who watch it in BluRay 3D will still largely understand why this worked, most people are now watching it alone, in 2D, on a much smaller screen.  The first time I saw the movie in this format I was much more underwhelmed.  Does that mean I should alter my grade and review?  To account for people who might not see this in theaters?  Absolutely not!  To account for people who might not see the movie in the intended format is to be a disservice to the movie itself.  Also, if the critic see's the movie in theaters, he must write about that experience, or else find his review is being inherently dishonest.

We MUST write about our experience with the movie first hand, and to try and think five steps ahead and ponder how people might be viewing it differently down the road is not only impractical, but in some cases impossible!  This isn't the first time a movie has been hurt by its home viewing experience.  For years people felt that "Lawrence of Arabia" was an over simplistic film that had very little visual flair.  For some, it was also too long.  But then, for many years after being released in theaters, the movie could only be shown in a heavily edited form on TV, where most of the movie was cut for time, cropped for the 4:3 aspect ratios the standard TV's had at the time, and broken up with commercials, which broke up the flow of the story.  It wasn't until years later when the film was released practically uncut (a few scenes are still missing due to the sands of time), in widescreen, and without commercials.  Now, the film is much better, and you can get a better understanding of why audiences and critics fell in love with it.

"Avatar," sadly, does require a bit more for you to get the full experience.  It helps to have a giant TV.  3D is pretty much essentially.  A group of people will certainly help.  In short, many audiences might only understand this movie when seen in a decent size theater that projects 3D.  It's sad, but that's how it is.  And while most films do lose a little of their luster when they go from theater to home, "Avatar" seems to have been more hurt than others (other than "How the West Was Won" and "The Polar Express").  Still, it must be noted that the review reflects the theatrical experience over the home experience, and some of the disconnect between the review and what you saw may be related to that.  If I was to go back and dock the movie on home video quality, it would probably get four stars as opposed to five.  That's the only concession I'll make though, as I still defend this as being a masterpiece of visual storytelling and immersive 3D!