They say everyone has a breaking point, and with “Avengers: Age of Ultron” I may have just found my breaking point in regards to writing about these superhero movies. Last year I applied to join a critics guild so that I would have officially “made it” in this business, but I was denied for rudimentary writing and repetition. I looked at my top ten latest reviews at the time and found they were almost all for superhero movies, which are actually the most difficult reviews to write because they may be fun, but rarely do they rise above entertaining, which doesn't leave much of an impression. I tell you this story not to get you to feel sorry for me, but to understand that less than inspiring films can lead to less then inspired writing. 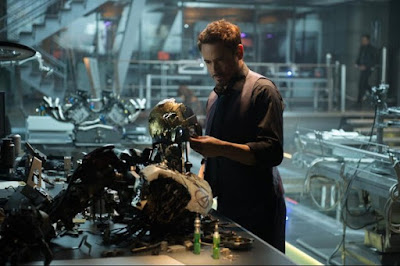 Now then, you might look at that last paragraph as a complete waste of space that shows little to no creativity, but it is the most honest thing about this film you are likely to read because that is the amount of effort that feels put into end product. The movie is so uninterested in why anything happens that it opens with the Avengers storming a Russian fortress without any context on why they are there, what they are doing, and if you honestly expect the screenplay to fill you in on what brought them all together later on, then I think you have higher expectations for this film then it deserves. But the characters are still there right?

Yes, they are. Captain America, Black Widow, Thor, Hawkeye, Hulk, and personal favorite Iron Man (played once more by Robert Downey, Jr. in the expected scene stealing performance) are all here. Frankly though, I find I don't care anymore. The first time all these characters came together I squealed like a ten year old boy. Now they are all together once more and I want them to actually do something other than pummel armies of enemies. In the first film it was aliens. Now they are robots. In both scenarios the enemies multiply so much that they start to look like ants. Watching these mighty superheroes plow through endless hordes of robots that all look the same feels so rudimentary that it stops being exciting before anything starts to happen. I think it would be more interesting to see how they'd play golf together.

In retrospect, what saved the first movie was the villain - Loki - who might not have been much of a fighter, but had lots of charisma. This time the antagonist is a robot named Ultron (James Spader), who was created by Tony Stark to save mankind, but immediately threatens to destroy it the second it comes to life. Why does Ultron want to destroy the world? The film doesn't give him a reason. We do learn that he has a fascination with the song “I've Got No Strings” from Disney's “Pinocchio,” but why he relates to that song is beyond the capability of this films abilities to explain. Did Stark have a copy of the movie on file when Ultron hacked into his iTunes account? Or was this just subliminal cross promotion on Disney's part (who owns Marvel)? Never mind. 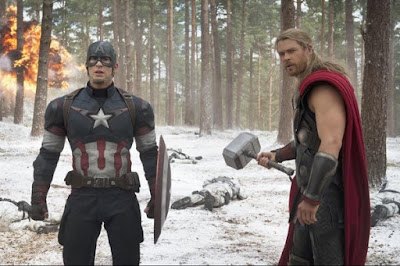 “Avengers: Age of Ultron” is almost three hours long, feels like two movies in one, and is still somehow not the game changer it should be. Course, how can it when all the characters in this film already have sequels planned? At this point the characters are too profitable to kill them off in any permanent way (the studio will do that when contract negotiations with the lead actors go sour). It's amazing how nothing ever feels like it's at stake while watching this. The film was written and directed by Joss Whedon, who has already promised that an extended cut with an alternate ending will be coming to BluRay. Is that his roundabout way of admitting that the film you'll see in theaters isn't what he planned?

Hard to say. What is easy to say is that this is the going to be the most undeserving blockbuster film the world will have received since “Star Wars Episode I: The Phantom Menace.” It's not just that the film is bad, but it's bad in such a lazy, trite way that knows it has an audience waiting to shell out money for a subpar project. I think we've gotten to the point where people are suffering what I'm going to coin “Compulsive Branding Attachment Syndrome,” a sickness, if you will, where the final product will be loved by millions of people because of the familiarness they are accustomed to despite the obvious shitty quality on display. That “Avengers: Age of Ultron” is going to be the biggest hit of the year is a calculated certainty. What is also true (though it might not be obvious to people with the aforementioned sickness) is that it is also one of the worst films of the year.