There is an old saying you kids might have heard of that goes “the more things change, the more they stay the same.”  Kids today think that finding out about affairs on a Facebook or Instragram account is a new revolution, but the reality is that it’s been around for years.  The only thing is back then we used to discover our spouses were shacking up with other people by reading love letters they wrote on their computers (or catching them in the act by picking up the local landline and hearing them talk to someone else intimately).  For that matter, people used to rent videos at Blockbuster and have them play on the TV in the background while the couple made love, barely paying attention to what was happening on screen (sounds a lot like ‘Netflix and chill’ doesn’t it?).  Gillian Robespierre’s “Landline” is a movie that would feel modern in every other way except for the setting. 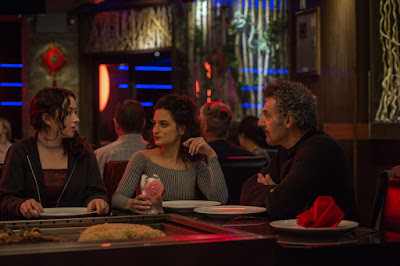 It takes place in 1995.  A time where teenagers are obsessed with talking on their phone all day to their parent’s dismay.  It is a time where Hilary Clinton is making bold speeches to sold out crowds with obvious political aspirations on the horizon.  It is a time when teenagers want their parents to get out of their lives so they can have casual sex and do illicit drugs.  So, you know, CLEARLY there is nothing going on during this time period to connect us to society of the present!  It’s scary to think that 1995 was more than twenty years ago.  I remember this year of my life almost perfectly.  I remember 1996 better, but I do have found memories as a kid here too.  The movie looks and feels like that year, and while I was too young to concern myself with adult affairs (ho ho), the way of life is familiar.  So too, I’m sorry to say, is the plot, which revolves around three female members in a family trying to cope with the revelation that the man of the house might be having an affair. 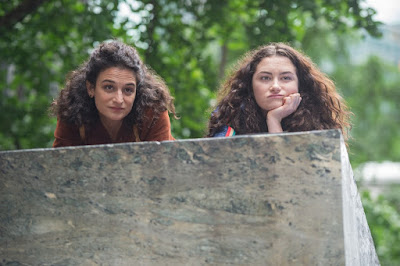 The suspicion arises when youngest daughter Ali (Abby Quinn) discovers love letters to a mysterious ‘C’ on her dads old Macintosh.  Her older sister Dana (Jenny Slate) is troubled by the news as well, but she is having her own midlife crisis, as she worries about her upcoming marriage and even embarks on an affair of her own.  The way she is following in her father’s footsteps so easily makes Ali even more determined to distance herself from her family.  It is unclear if the mother (Edie Falco) knows what is going on, but if the father (John Turturro) IS having an affair, he hides it well!  Unlike most families, he is the peacemaker of the two, which either gains him respect or loathing (depending on the daughter and their situation).  This isn’t a pretty situation, to be sure.  It also isn’t a fascinating story per se.  I’ve seen this movie before.  Many times, in fact. 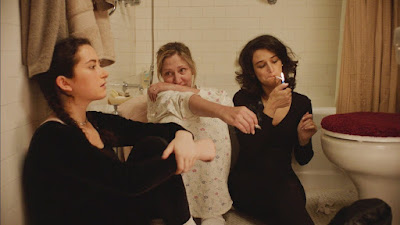 To the point where the dilemma I’m having is I’m seeing the same movie repeatedly, except in theaters I’m seeing the same action movie multiple times while on streaming sites it’s the same drama.  Granted, I DID see this in a multiplex, but since it was produced by Amazon Studios, that means it was intended for the Amazon Prime Video audiences and not people who buy tickets.  With that understood, I can understand why home might be a better place to see “Landline.”  Movie goers who watch this at home are likely to get distracted by their phones and house chores, so it will be playing in the background.  As background noise, it will be serviceable.  In theaters, it is still good enough to hold your attention, but not good enough to leave a lasting impression when you get to the parking lot.  In both cases the nostalgia is strong though, which will count for something if you lived those years yourself (but not much if you were born after 1999).