Considering that film makers today love to pay tribute to the movies of old, it's a little surprising that there aren't any throwbacks to silent films. Sure we get the occasional black & white film (“Good Night and Good Luck” and “Schindler's List” come to mind), but when was the last time you watched a film where the dialog was muted? The fact of the matter is that when the movies went to sound (and became “talkies”) Hollywood ran with the new craze and never looked back. So what does someone do to get a movie like “The Artist” made? I don't know. When director Michel Hazanavicius told the studios he wanted to make this film silent the response he got was “yeah, and I'd like to go to the moon while we're at it.” 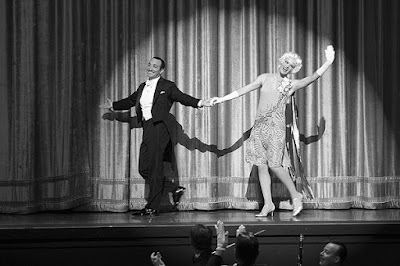 Lo and behold though we have “The Artist” in theaters now. It contains virtually no dialog, a crusty soundtrack that sounds like an old fashioned orchestra is playing it…heck, and the film isn't even in widescreen. Yet the film is charming and intriguing in so many ways. Not the least of which is its pretty dramatic story about a famous movie star named George Valentine (Jean Dujardin), who is one of those good looking guys that only the 1920's could have produced. He is the hottest thing in Hollywood, but when sound comes along he shuns the new craze (for reasons that will become painfully obvious later on). As he fails to make the transition he is forced to watch a young Peppy Miller (Bérénice Bejo) gain new fame thanks to her involvement in talkies. 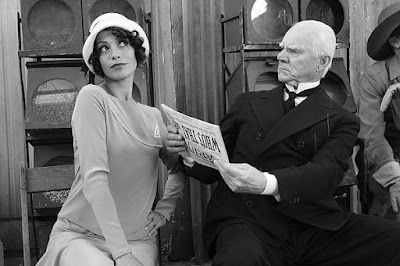 She is humble about her success but she has a reason to be: She loves George. He loves her too. You can see it in their eyes. Without dialog the audience can only reaction to the actor's faces, and in their eyes there is passion that words cannot express. This is one of the many things that prove why “The Artist” is a great film and not just a gimmick. A lesser film would have run with the fact this was a silent film and left it at that. What Hazanavicius does is make a great film the old fashioned way. We soon forget that the film is silent and are swept up in the beautiful romance and dramatic story of a man who lets his pride get in his way one too many times. 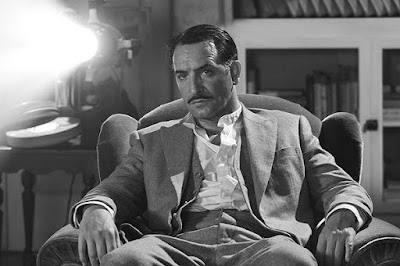 Despite looking like an antique, the film has many beautiful and poetic shots that have to be seen to be believed. Which is just as well, seeing how that's pretty all you pretty much CAN do! The actors all do a magnificent job all things considered. It must have been a challenge for them to know that their body movement was going to be telling the story here, and that everything needed to be just right. Too little and the audience would be bored. Too much and the audience would feel this was over-the-top. The actors find the perfect balance though and everything just clicks. Will audiences today sit through a silent film? 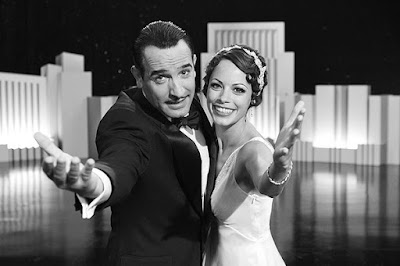 I think they will. They still sit through Charlie Chaplin films after all. Plus with the earlier release of Martin Scorsese's “Hugo” paying tribute to silent films, I think people's interest in them has perked a little. Is this coincidental timing or an act of God? I'll you decide. The message of “The Artist” is loud and clear: Films don't need all the flash and pizazz to be great. At the same time though we have to keep an open mind about advances in the medium. To ignore them would be to make the same mistake George makes in this film, and potentially fall into obscurity. I don't expect there to be many more silent films even if this one is a huge success. Not because all the good ideas for silent films are used up now, but I have a funny feeling actors just love the sound of their own voice too much.

P.S. The MPAA has made the stupefying choice to rate “The Artist” PG-13 because a woman gives someone the middle finger once in the film. I feel this is a wild overreaction on their part, and most families will find this to be a delightful film that the whole family can enjoy.