“The Dark Knight” is one of the biggest surprises of the year. Rarely has a film been hyped to the extent as this one has. Not only is it the sequel to one of the best superhero films ever made (“Batman Begins”), but it’s also the final major performance from Heath Ledger, an actors whose death I have, admittedly, not gotten over. As I type this a Heath Ledger modeled Joker toy stands next to my monitor, smiling it’s evil smile. I can almost hear it saying one of the movies most haunting quotes; “Why so serious?” This movie is likely going to break all sorts of records this weekend. Partly because it’s a Batman movie and partly because it’s Ledger’s last film. Regardless what reason you go to see it though, you are going to be treated to something much more then a simple Batman film. 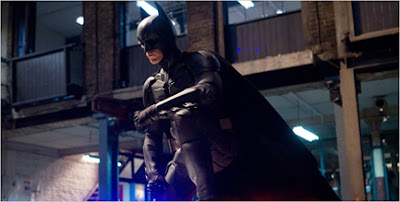 Everything from the story, to the characters, to the bold choice to drop Batman from the title seems to be the creators screaming that this movie will stand out. “The Dark Knight” might directly Batman himself, or it could be a metaphor for a couple of the scenes intense emotional scenes, where tough choices are forced upon good people with none leading to a happy conclusion. Most of these choices are triggered by The Joker, Gotham’s “Prince of Crime” who is more crazy then we’ve ever seen him before. His origin is never explained and he has no goals, the only thing he’s interested in is causing chaos (because it’s fun) and bringing righteous people down to his level. If Batman refuses to take off his mask to save the life of a cop, then he’ll just capture two people, strap them to bombs twenty miles apart from each other, and let Batman decide which life is worth saving more.

And to make this situation even MORE of a dilemma the people chosen to be killed are Batman’s love interest Rachael Dawes (Maggie Gyllenhaal taking over for Katie Holmes), and district attorney Harvey Dent (Aaron Eckard), whom Batman believes would do a better job at locking up crime then he could. By now I’ve set up one scenario and you’ve probably realized the situation is more evil and sinister then something you normally find in a superhero movie. Most villains want to blow up buildings and take over the world, where here we have a villain who blows up things for fun at times, but is mainly interested in playing mind games for his sick entertainment. This means that instead of getting a superhero movie, we instead get a crime thriller. A dark one. A movie that actually sets the benchmark pretty high, where even suspected twists are pulled off in shocking ways.

It’s fitting that people who don’t normally watch superhero movies are going to see this, as they are about to witness one of the finest films made in the last ten years. A movie where good and evil are not so black-and-white, and a thin line is being walked every day. One scene that has post-9/11 influences is when Batman uses cell phone surveillance on the entire city to find Joker. Yes, technically he’s breaking some privacy rules. On the other hand, Joker DID just blow up a hospital for fun, so in this case maybe Batman has a point. Though the conflict of the movie is mainly between Batman and Joker’s sense of morality this is an assemble movie. Batman has just about the same amount of screen time as Harvey Dent, as do all the other characters. No character is useless in this film. 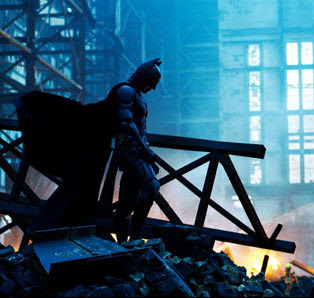 No theme is underdeveloped. Joker gives us glimpses of his history through various bits of dialog, a history that suggests father abusement and wife abandonment. This makes both Joker and Batman similar, as family issues drove them to do both evil and good. If Ledger gets an Oscar for this performance, it won’t be a sympathy vote. I don’t even like calling this film a superhero movie as it seems to cheapen it. This movie is in the same category as “Star Wars,” Lord of the Rings,” and “Silence of the Lambs,” as a genre movie for people who don’t normally watch this genre.

When the film is over and the lights go on I was awestruck by this film. This wonderful, dark, smart, and very mature film (the violence, while bloodless, makes this an R-rated film in my eyes). I have since seen it again and was mesmerized by it all over. The reason I watched it twice was to insure that the special effects (which was mostly made with stunt work) weren’t overshadowing the story. It was not, and the story was just as good - if not more so - the second time around. This is one of the best films of the year, and it could even be a film that defines a new generation of film making.