"The Girl Without Hands" Review

The fairy tales of the Grimm Brothers were stories that were meant to terrify kids.  To scare them.  To show a grim reality in a world of fantastical imagination.  Most of the stories had happy endings, true; but these were mortified happy endings, NOT genuine ones!  The only reason they were ideal stories for Disney to adapt into hugely successful movies was because Walt could cut out the more questionable aspects, and trim around the rest (those who have read the original story of “The Little Mermaid” knows that no one really ‘wins’ in that one).  “The Girl Without Hands” is one of the rare fairy tales that Disney never even attempted to make into an animated film, and thus, the responsibility has been given to French director Sébastien Laudenbach to breath life into this new adaptation.  He does so in a way where watching it feels like watching a storybook brought to life, but one that is dark and…well, Grimm (ho ho). 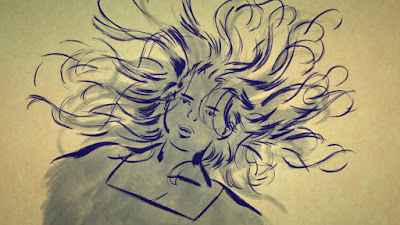 The tone of the film is so dark, in fact, that it may surprise people such a story was told to kids in the first place.  The scenarios are so nightmarish, that one should wonder if it was all justified in an attempt to warn kids about the power greed has over people?  The story (for those who have not heard) involves a man who makes a deal with the Devil to gain untold riches in life, so long as he sells whatever is behind his house.  All that is behind said house is an apple tree, so he agrees.  Instantly, the water flows with gold, and life good.  Problem is, his daughter liked to climb the tree, and she was in it when it was sold.  That means she was sold to the Devil (and the Devil always comes to collect).  What will dismay many is how complacent the father is to the Devil in order to keep his gold.  How much the man will sacrifice in order to gain Earthly wealth. 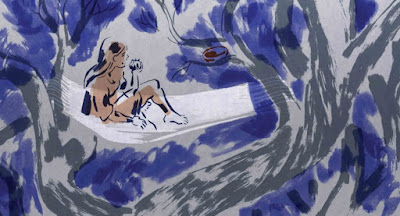 Some may have heard parables of a wise carpenter who spoke against copious amounts of wealth, warning that having so much could cause you to lose your soul.  So, it is for the father in this movie, who does some very horrible things to his family in hopes of maintaining his new-found status in the world.  As outside observers, we watch and are horrified by the things that happen to the titular girl in the title (who, as you may have feared, DOES have hands at the beginning).  I’m not going to lie: It’s not always pleasant.  I think you would have to be a little morbid yourself to find entertainment in many of the things happening.  You can be compelled and emotionally charge by said things, but entertaining isn’t a word I would really use to describe this.  This is also a story that would likely have needed to be retooled for modern audiences, as the titular character is more of a passive figure despite being the main protagonist.  Most of the things that happen to her do so at the hands of men, devils, and a water spirit. 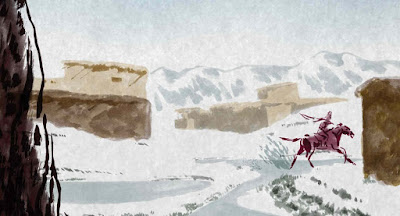 I know people accepted such a reality for Oliver Twist, but I wonder if people would reject the idea this time around?  Never mind, let’s move onto the animation itself.  Animated like a kid’s storybook (with lingering paint stains and sketches that come and go as they please), it has a unique visual look that will likely put off many who watch it.  If these were drawings it would be accepted as is, but as moving visuals it does create a little disconnect, and it is not as easy on the eyes as a classic animated Disney film is.  I don’t consider this a con as I like it when movies have their own aesthetic art design (and I personally think this is a beautiful looking film), but it does mean there are likely to be many who won’t get past the first ten to fifteen minutes.  Some of the images are even animated so effectively they raise the intensity level considerably.  This is not a family movie that is an easy sell nor is it one that most will think about when they hear “storybook fairytale.” 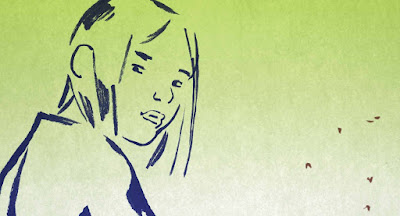 Thankfully, GKIDS is a company not afraid of unique styles of animation or what constitutes as ‘typical family entertainment,’ and has done American audiences another favor by picking up the film for local distribution.  They likely do so only because they respect the movie as a piece of art and are under no illusions of it being a financial success; there is no English dub nor has it even been submitted to the MPAA for a rating for theaters who are uneasy about showing unrated films.  They have picked it up, put it out in a few theaters for you to find, and will then quietly release it on DVD.  Discovering it is up to the audience in this case.  A bit unfair, maybe, but totally understandable considering the current market.  I have done my part in writing this review and I do believe the hunt to find it will be well rewarded.  Hopefully my readers are up for the task.