I’ve opened my last few reviews with the undeniable fact that I have been suffering from writer’s block, and, as a result, many of those reviews have not been published.  This very well may be the exception to the rule because unlike many movies I’ve seen in the past month (both good and bad) none of them have made me think so deeply about their meaning like Darren Aronofsky’s “mother!” has.  The film is bizarre in many ways and disturbing in all the others.  The images are so unsettling, that a friend of mine described the movie as ‘Satanic’ on her Facebook page.  I’d call the movie polarizing except it makes real polarizing movies look straightforward in comparison.  Besides, I’m not entirely sure if what we have is a traditional movie here, so much as we have a visualized moral objection to a deity.  Let me explain.  I was writing a draft of this review when I was under the assumption that I knew what it was about. I assumed that this was an allegory for fame and the need for some people to be loved by strangers, and how that hurts people we care about the most.  It didn’t really explain all the supernatural elements, but I figured the movie had to be about something, and this was the best guess I had at the time.  However, I don’t remember character names very well, and went to IMDB to check out what the names of the main characters were.  The answer shocked me: mother (Jennifer Lawrence) and Him (Javier Bardem).  These are the only characters to be given names, as other actors are simply referred to as Man, Woman, Younger Brother, Fool, and so forth.  I contemplated the names.  Why mother?  Why Him?  Why does she have a lowercase letter at the beginning of the name but his is capped?  As I thought about the names I thought about the structure, and it dawned on me that this is Aronofsky going through a bit of a spiritual crisis as far as how humanity is treating the environment. 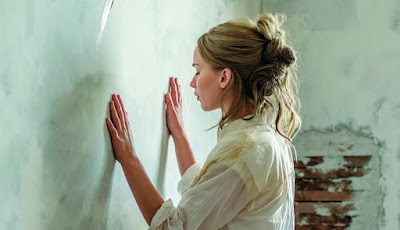 Now, take a trip back with me a few years ago when “Noah” was released.  For me, it was a decent (if not unbiblical) telling of the story.  I’m not sure if Russell Crowe was my choice for what would make a good Noah, but the thing that did stand out is that God seemed more interested in saving the environment than mankind.  As far as He was concerned, man was destroying the Earth, and despite the human’s belief in a supreme being, Noah’s family were the only people taking care of the environment.  Thus, the world is flooded, and nature is saved by preserving only the good humans on board.  Now, let’s take that theme and apply it to “mother!”  With the names firmly in place I take away that mother is Mother Nature.  The house represents the Earth.  Him is God, who owns the house and lets Mother Nature make it beautiful.  Then, a man (Ed Harris) and woman (Michelle Pfeiffer) come along. 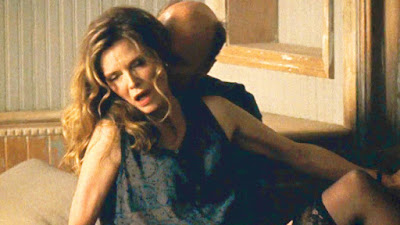 Him is happy to have company but mother suspects they can be trouble.  Sure enough, the two are fascinating by a crystal glass that is in Him’s study.  This is the one item he forbids them from touching.  But human nature is frail, the two disobey and break the stone and Him gets angry.  He forbids them of entering the study again and boards up the room.  mother asks Him why he doesn’t simply ask them to leave, to which he replies, “they have nowhere else to go.”  The story, as you probably guessed, sounds a lot like Adam and Eve.  At this point mother is concerned with people being in her house and violating her space.  Him loves people and is welcoming to all.  He has writings that inspire millions of people, but the more he gives the more they demand.  The more he opens his house to mankind the more it suffers.  It even bleeds and cries in pain. 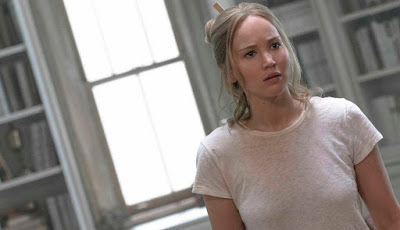 mother herself consistently feels violated by the outpouring of guests and His refusal to just be satisfied with her alone.  Based on this movie (and the aforementioned “Noah”) I feel that I understand Aronofsky better as a person through his direction: He does not believe in God, and the main reason is that if a God exists, then he is a jerk for valuing humans over nature.  Humans who take and destroy everything in their path for their own selfish gain.  Whether you call him an environmentalist or a tree hugger, it is clear that we have a director who is concerned for the environment and fears we are in big trouble if we are allowed to continue unchecked.  He likely has nightmares about the world imploding on itself (in the way the house does in this film) and is able to visualize those nightmares with the help of top Hollywood talent and a budget to bring it all to life. 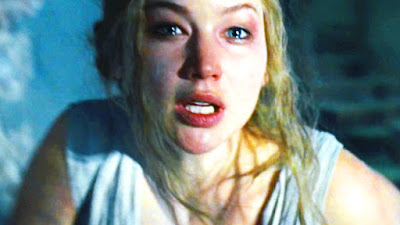 “mother!” is a movie that I feel I understand more the longer I think about it.  Is it a movie I like?  Eh…’like’ is probably the wrong word I would use.  It is a movie I respect.  It is a movie that is about something (though you may have to think long and hard to discover what that is).  I can’t say I really enjoyed it though.  I say that as I bring this review to a close and am prepared to give it a grade that will surely give off the strong impression of a recommendation to those who skim the text just to see the stars.  It won’t work that way this time.  If anyone see’s it just on the star grade alone, I will have no choice but to recommend they read this review in full to understand what they were REALLY getting themselves into!  No, the star grade reflects a vision brought to life by a complicated director.  My fascination with “mother!” has more to do with what it says about the director than what it says about anything else. 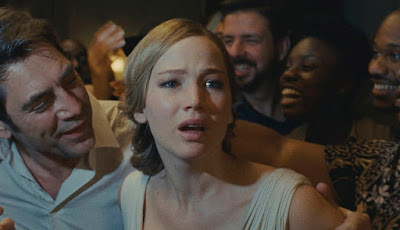 It is a glimpse into the mind of someone who believes that Earth is valuable and sacred, and who is suspicious of the idea of a God because he can’t fathom why a divine creator would love the human race, which he considers flawed and reprehensible.  If it is any consolation, I’ve been to many Bible studies where the pastor ponders this same dilemma.  No one has voiced that concern in such a visually disturbing way before, so I must sit up and take notice.  I do understand that “mother!” is at the very least confusing, and many people will rightfully not like it.  I can’t even say for certain whether I liked it or not.  But I do respect it.  I do admire it.  And in a year where movies are so boring and by-the-numbers that I’m coming off a month-long writer’s block, it says something that this film got me to get out my pen and start thinking, contemplating, and forming words once again.