The biggest accomplishment “Justice League” will be remembered for is that it got made at all.  There has been so much written in the media about all the turmoil that has gone on behind the scenes during the making of the film, that the fact that we have it at all is - in itself - a news story.  I wish I could say that while watching you would be unaware of the behind-the-scenes problems, but the fact of the matter is that “Justice League” is a Frankenstein monster of a movie that feels like it was edited together from different artistic (and corporate) visions, with hardly a functioning brain cell on display and forced humor in the midst of a movie that is largely melancholic.  Even the colors go from being drab and lukewarm to bright and colorful, and I may be crazy in noticing this, but Bruce Wayne seems to randomly gain and lose weight in his chin. 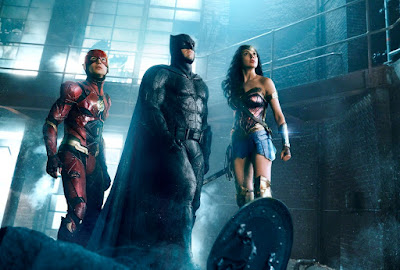 I almost don’t know if I should be watching this as a movie or as a cautionary tale of how spectacularly wrong things can go when you have a studio that is more interested in making an expensive TV show as opposed to a movie (though I’ve felt this way since the whole endeavor started with “Man of Steel”).  Mainly because I feel discussing the changing of directors, forced editing of the run time to less than two hours, and reshoots that stand out way more than they should are MUCH more interesting topics at hand than anything that is going on in the movie!  For the story is just an excuse to pull various characters that people love together in one adventures to save the world from a charismatic villain, all during action sequences that are fun and vibrant.  Oh, wait, sorry, that’s not “Justice League” that’s “The Avengers.”  This story gathers five iconic characters together (two who we know) to find a bland villain with unclear motives, all while partaking in action sequences that are rarely fun. 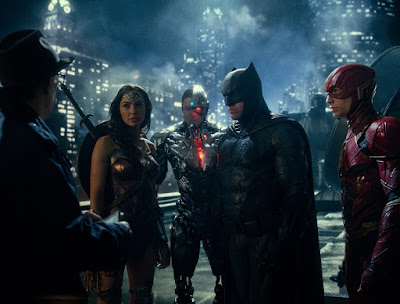 I admit to getting some joy out of watching The Flash (Ezra Miller) doing his running thing and Wonder Woman (Gal Gadot) still kicks some major butt, however even their scenes never reach anything remotely memorable.  Cyborg seems like he could have a very good story arc (and Ray Fisher is easily the best actor in the bunch), but it is one that needs its own two hour movie, and thus we only have fifteen minutes to spend on it.  Aquaman (Jason Momoa) is a water guy of…some sort (I couldn’t really figure it out) who goes from being brooding and serious until it’s time to get a ride on the Batmobile and give out the trailers “YEEAAHHHHH” shout.  All of them are brought together to destroy an alien god creature who seems to want to summon power for one reason or another.  I also want to mention that it doesn’t matter if his motivations are explained in the sequel, the only thing I care about is that they aren’t explained now. 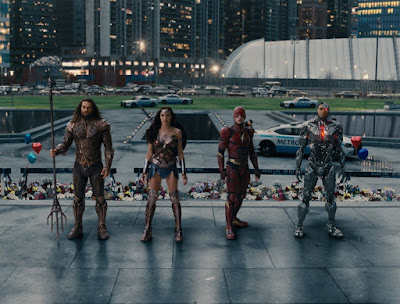 I was a bit late in writing my review and in that time I did read some passing comments that people liked it because they thought the characters had great dialog and worked well together.  I’m not sure what they’re talking about as the dialog about needing to save the world and getting along have been around at least since Spencer Tracy and Sidney Poitier were chained together (and hopefully I don’t have to mention other legendary actors within this review again), and the characters don’t really talk to each other so much as they shout and pontificate.  There’s even a scene where they discuss bringing a dead person back to life, and no one so much as questions the moral complications of playing God (though they do mention that they last time it happened things didn’t turn out so well).  This leads to me to believe that people who like the dialog and the characters here already liked them from the comics or TV shows, always wanted to see this movie, and now that they are together that is enough for them. 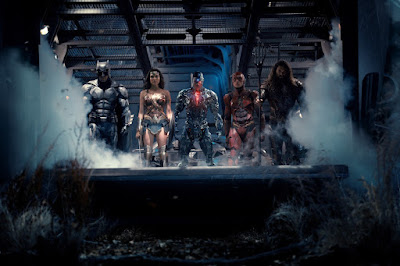 Which is…sad, really.  I would have hoped that after “Wonder Woman” and “Thor: Ragnorok” people would understand that you can have your characters AND a good movie at the same time!  For many I’m sure having their iconic favorites standing in a room bickering is enough to pass these days, and I’m sorry but this isn’t enough to get me to care.  How can I even claim this is a better movie just because it’s not as terrible as “Batman v Superman: Dawn of Justice?”  It might not have been as painful an experience this time around but it was also much more boring.  It’s clear that changing the directors, rewriting the script, and editing it down to a reasonable length wasn’t enough to save anything and this mentality that people are just happy to have “Justice League” at all seems like a really poor bar to have to pass to qualify as good these days.  But, hey, the movie exists!  If this fact makes you happy enough then enjoy it until the next big superhero team up occurs.