skip to main | skip to sidebar
Home » Disney , Editorial » Why There is No Review of "Thor: Ragnorak" on this Site (UPDATE: Strikes Over)

Why There is No Review of "Thor: Ragnorak" on this Site (UPDATE: Strikes Over) 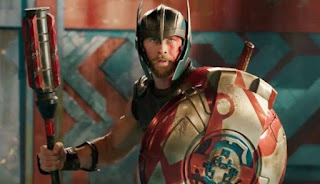 It's amazing how fast a situation can turn around.  I wanted to write about the Disney boycott of journalism, but didn't have time to write a proper piece this morning.  I filmed this quick YouTube video sharing my thoughts on the matter with the intention of elaborating later on.  Now the video will serve as a prequel to my thoughts on the situation now that Disney has 'unbanned' the Los Angeles Times from future movie screenings.

So that was this morning.  What's the current status of the boycott?  Well, Disney has officially decided to de-blacklist the LA Times.  In an announcement this afternoon they stated:

We’ve had productive discussions with the newly installed leadership at the Los Angeles Times regarding our specific concerns, and as a result, we’ve agreed to restore access to advance screenings for their film critics.

Alright, so...that's the end of discussion right?  The LA Times can go to Disney movies again, critics pledged a boycott until the decision was publicly rescinded, so everything's cool right?  In my mind, no, things are not alright.  It would have been one thing if Disney publicly apologized for being a bully.  It would have spoken volumes if Bob Iger admitted he crossed a line and pledged not to do so again.  Instead, Disney simply claimed that they discussed their concerns with "new leadership" and have agreed to restore their access to movies.  Really...that's it?  Alright, let's discuss two major problems with this statement.  The first is that I was unaware that there was "new leadership" at the LA Times.  What does that even mean?  Are they talking about management?  I mean, there COULD be new managers...but considering the paper is without controversy except this one issue (with which they have had overwhelming support) it seems odd that the paper would have to shake up management at all!

Personally, I want the LA Times to personally confirm this is true and who the new bosses/leaders/writers even are.  The second problem I have is even if this is true, then the reasons for Disney lifting their ban are actually far, FAR worse!  It gives off the impression that Disney got their way in the end.  They got old bosses/leaders/writers fired (for what appears to have been accurate reporting), new people got installed, Disney lawyers told them what's what, and THEN they agreed to let them back into their movies!  This doesn't bother anyone?  Not one?  I mean, for the record, I think the Disney's explanation is total bullshit (sorry mom, I could be in legal trouble if I use the nicer word...seriously).  I don't believe the LA Times has new faces overseeing the business.  I don't believe the LA Times agreed with any of Disney's assertions (the lack of retraction speaks volumes in that area).  I believe Disney realized this was an unwinnable battle and a potential public relations disaster.

They have awards to win.  They have Star Wars to push.  They have a Best Animated Feature Oscar that they have had a monopoly on for YEARS (and they sure as heck aren't giving it up to "Loving Vincent" or "A Silent Voice")!  The critics weren't going to back down and in doing so became supported in ways they hadn't been for a long time.  Dare I say it, the critics were even relevant for the first time in years these past few days.  They had no reason to back down.  That wouldn't be a big deal for Disney in and of itself though.  What really did it was that the critics guilds jointly disqualified Disney's films, thus cutting out the first phase in what award bloggers refer to as "The Whisper Campaign," and not having that could cost movies like "Star Wars: The Last Jedi," "Coco," "Queen of Katwe," and the various Marvel movies early ammo for the big awards.  Also, what if the Hollywood Foreign Press Association decided to join the boycott?  They support free press and (more importantly) run the highly successful (for some reason) Golden Globe Awards.  A shut out there could be devastating, so Disney likely didn't want it to get to that point.

They couldn't just admit any wrong doing though.  That would look bad on the company and Iger (who is considering a presidential run when his contract with Disney expires in 2019), so this (likely) bullshit story about new management was created and the ban was lifted, and Disney is hoping things go back to normal.  What's concerning is that if some articles are to be believed, the critics won this round.  I can say with safety and a straight face they did not.  If the critics and the guilds let Disney enter the awards race they have lost.  Disney still walked over everyone, tried to destroy the ethnics of journalism, and got to make up their own story and walk away scot free.  You can write your own happy ending in the movies, but this is real life, and Disney can't be allowed to do that.  I believe the shutout from awards needs to stand (and be expanded to bigger awards, if necessary).  The story that the LA Times has new leadership needs to be confirmed or denied in detail.  If it's true, Disney AND the Times needs to be held to the fire as these "discussions" could be a HUGE conflict of interest in the industry!

If the story of the times getting new management is not true, Disney needs to be publically questioned for slander.  In any scenario the Mouse owes the industry and apology that at least sounds sincere.  Otherwise there is no lesson learned, and the company will go back to their bullying ways and revisionist history.  I suppose we'll just have to wait and see how this plays out, but in my eyes the story isn't over by a longshot.  If it is then it will be the most depressing cop out in journalism I've seen in a long time.
Tweet