Though Rowan Atkinson may be currently touring the streets of Paris in his latest movie “Mr. Bean’s Holiday,” many people many forget that ten years ago me was walking the streets of San Francisco in “Bean: The Movie,” the mumbling idiots first major motion picture. It’s may be hard to believe now, but when “Bean: The Movie” was released there was actually a fair amount of controversy surrounding the movie. Not because of objectionable content (though the movie’s PG-13 rating certainly guaranteed that the movie would be less family friendly then the TV show was), but because many Mr. Bean fans were upset with the movies translation of the Bean character from TV to the big screen. Though complaining about how a famous character is portrayed in a movie is nothing new, I must contend that the detractors may have had a point here. 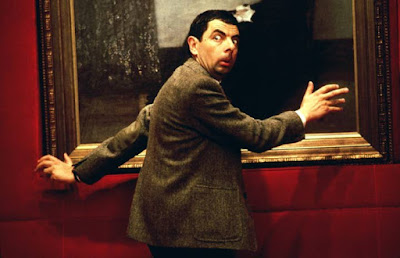 Like the recent Bean movie, “Bean: The Movie” is very light on plot. The difference between the current Bean movie and this one is that the writers seem to be trying harder to make a movie length story, and they don’t end up with much of a better story. The story in this movie involves the fact that Bean (Rowan Atkinson) works at an art museum in England, and is constantly called “the worst employee [working there].” If it weren’t for the fact the museum owner thought Bean was a pleasant chap, Bean wouldn’t be around. But when America buys the famous Whistler’s Mother, the museum employees send the painting back home with Bean as the escort. Bean, who is known as Dr. Bean to his American hosts, is now being mistaken for an art expert. Though the British museum claims he is a “very brilliant man,” his new American friend David Langley (Peter MacNicol) starts to have suspicions about “Dr. Bean.” 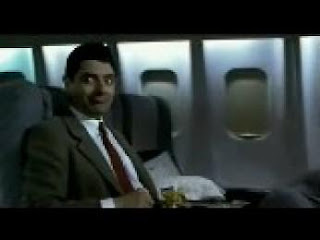 After all, there aren’t many art scholars who toss candy in the air, tamper with movie rides, and have difficulty speaking clearly. One antic that raises David’s eyebrows is when Bean tried making a turkey, that eventually winds up on his head. If that scene doesn’t get you laughing, I think a gag that involves wet pants will have you howling. But what of the controversy in all this? I’m sure many of you are wondering why this movie would make Bean fans upset. After all, most of this material must sound quite funny. Well, it is, and I won’t deny the movie has it’s moments, but some of the obvious Americanizations are a bit bothersome. The one thing that people are quick to point out is that Bean does do a fair amount of talking in this movie. Having Bean talk is wrong on so many level, seeing as how a good majority of the humor comes from people not being able to understand Bean’s mumbling. 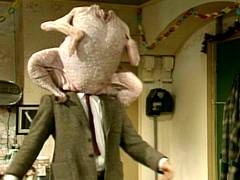 There’s even a (admitingly very funny scene) where Bean has to make a speech, that feels very weird and out of place in a Bean movie. Then there’s the fact that many of the jokes in this movie come from sexual innuendo’s and bad language, which feels completely out of place in a Bean movie. I think what bothered most people though is how useless the storyline is for the movie. The script may be movie sized, but the story never amounts to anything special. The movie is actually at it’s best when the story is put on the back burner and Bean can just do his own thing. It’s these moments where the movie gets most of it’s laughs. When all is said and done though, I can’t say that “Bean: The Movie” is bad, just misguided. I get some of the complaints, and I do wish the material had been treated with more respect. The movie is certainly better in parts then it is whole. 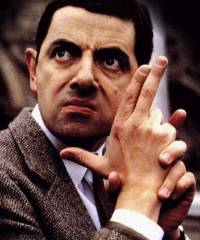 But I also understand that making a movie based off a character who stars in five minute silent skits could not have been the easiest task in the world. And truth be told, “Bean: The Movie” introduced Bean to a whole new wave of fans, so the movie served some purpose in the long run. I think it’s clear to everyone that “Mr. Bean’s Holiday” is the better of the two Bean movies, but “Bean: The Movie” is certainly not the worst movie you’re ever going to see either. I'm not giving it a passing grade, but I'm not exactly opposed to the idea of seeing it now that you can rent it through Netflix or Blockbuster Online.