“Phantom Boy” is the first movie I’ve seen since “The Secret Life of Pets” to have a concept that I feel could have been explored much, much better than it has been.  The concept here is that a young boy with cancer has the ability to leave his body when he is asleep and roam the world as a phantom.  He can’t meddle with anything nor can anyone sense him, but he can be there, observing things he normally wouldn’t be privy to.  One of these times he goes to sleep, follows his unexpected mother who has just told him to be strong to her car, only to witness her break down crying when she is out of sight (or so she thinks).  It is a sad, uncompromising scene.  One that will likely bother some parents and make some kids uncomfortable, but these are the kind of dark touches that used to be frequent in the classic Disney films, before the world decided we needed to coddle our kids and hide them from the world. 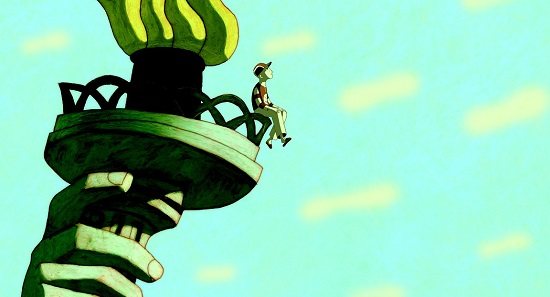 “Phantom Boy” is at its best when it is telling the story of this sick boy who gets a glimpse at his families life when he is not around.  He gets to witness his parents worrying about his future, wondering what to tell his sister should he die, and eavesdrop on the doctors who have to be sympathic yet practical with his parents.  For a little bit, I was wondering if we were going to be getting something unique: A PG-rated family film, made with classic 2D animation, that was a drama about life and the harsh realities it brings in a way that can be embraced by both kids and adults?  Pixar pulled it off last year with the wonderful “Inside Out,” and I was wondering if lightening could strike twice.  Sadly, the film gets away from this concept at one point when an evil mad man takes over the city electrical grid and shuts down New York’s power.  The city is scrambling to try and find him, but one man does know where he is. 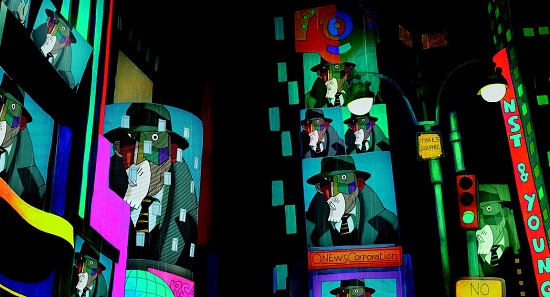 A wheelchair bound cop knows the location of the mad man, but his superior doesn’t believe him.  What this cop has that the other officers don’t have are two trump cards: A female reporter named Mary, and the young boy who can turn into a phantom and find the clues the police officers are blind to.  I sunk into my chair, a little disappointed that this is the direction the movie decided to go in.  I had a sense that this was starting out as something special, and turning it into an action/mystery seemed like a huge cop out to me (ho ho).  That said, the new direction the movie takes is…not bad, per se.  Let’s just say it goes down a path that is a little too familiar for it’s unconventional premise.  Since this is a family film to boot, the action is a little restrained, and the villain rarely comes off as scary or threatening as the film makers want him to. 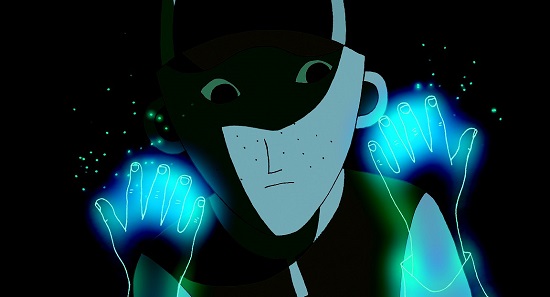 The movie, I want to stress, is by no means bad.  It provides a fun visual style, pleasant characters, and more than a few human touches.  It’s about as good as the director’s previous film, “A Cat in Paris,” which was nominated for the Academy Award for Best Animated Feature a few years ago.  The key difference as I see it is that that film didn’t begin with such a daring concept, nor did it ever suggest it had the makings of greatness in it.  “Phantom Boy,” by contrast, gave off both these feelings.  The concept was fresh and the beginning suggested something dramatic and grand to come.  That the film plays it safe doesn’t make the movie bad, just disappointing and (maybe) a little underwhelming.  It is still an easy recommendation if it is in your area.  Sadly, movies like “Phantom Boy” don’t open big and have stealth release plans.  It is hard to recommend parents go on a hunt for it when “Pete’s Dragon” is currently easy to find and the upcoming “Kobo and the Magic Strings” will also be within easy reach.