There is a sad reality that human beings must face that we are all sinful, evil people.  Even if we have been raised in a loving home and stable environment, if put in the right situation we are capable of doing horrendous things to good people.  This is why most religions – including Christianity – stress that no man is sinless, and we all need forgiveness.  “The Stanford Prison Experiment” is a movie that follows the real-life experiment in 1971 that (more or less) proved this very thing.  It was an experiment that was supposed to observe how people would react if they were put in power or had that power taken away from them. 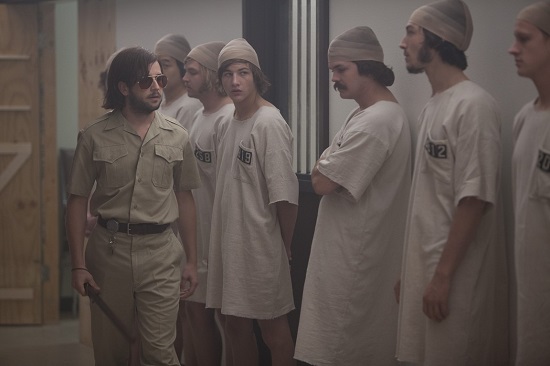 This was spearheaded by Dr. Phillip Zimbardo (Billy Crudup), who wasn’t sure what he would find when he turned the basement into a fake prison for volunteers to stay in, but he would find out very soon.  The results were startling and (to an extent) horrifying.  At first the prisoners don’t take what is going on seriously, seeing this as nothing more than an easy way to get money.  This changes when the volunteers who “play” the guards start getting abusive in their power.  They start verbally abusing their “prisoners,” they force them to remember their number, they award good behavior and punish unruly behavior.  One of the guards especially gets into the act, copying the persona of the evil guard in “Cool Hand Luke” as his inspiration to strike fear into the prisoners. 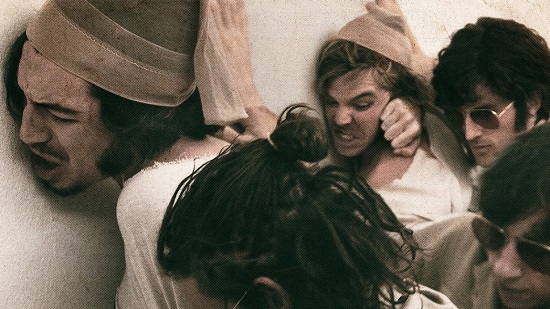 The thing that makes “The Stanford Prison Experiment” so scary is the fact that it makes the viewers willing participants in the experiment as well.  Sure, we’re just observing, but I was shocked to find myself totally engrossed in what was happening.  Like the doctor, I wanted to see the experiment through to the end purely to see just how far downhill things would go.  This makes it easier to look sympathetically at Dr. Phillip, who not only has to study the results, but takes on the position as “warden” to help keep the peace when things go wrong.  In a strange way, he has now become a part of the very thing he was only supposed to observe.  He’s so involved in how the “prison” is run, that when a fellow colleague asks him if there is an element that has been introduced that could change the results of the study, he is baffled at the suggestion.

The film is about as perfect a representation of the real Stanford Prison Experiment as could have ever been put to film.  Even if someone made a documentary about the subject, I doubt it would be as effective in giving us a true idea of what this was like than this film already has.  Here is a film that boxes us in a small room with these kids – kids who, I was to stress, have done nothing wrong – and we witness them either become monsters or discouraged sheep.  Some become both.  We see the adults in charge change their own behavior for the sake of keeping up the façade, and some of them don’t like what they see.  Many of the characters are blind to what this is doing to themselves, much like how we in the audience don’t realize we are silently rooting for the madness to continue.

“The Stanford Prison Experiment” is directed by Kyle Patrick Alvarez, whose work I am unfamiliar with, but who is someone to keep an eye on.  This material could not have been easy to envision for film.  Movies where characters are largely confined to one or two rooms are difficult to make exciting, and usually feel more stagey than anything.  This movie is full of energy and tension, and hinges on an idea that is more relevant today than it ever has been.  With reports of tortured prisoners in Iraq and police brutality in prison, I must wonder if we really learned anything from the Dr. Phillips research?  Maybe we have but, like watching this movie, we are secretly too enamored with the excitement of what could result in letting things go to try and stop it.